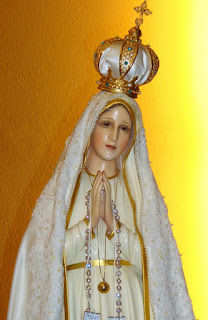 Have you heard about the atheists in Oklahoma who plan to desecrate a statue of Mary outside the cathedral on Christmas Eve? This immediately brings to mind the outrages against Mary described in the Five First Saturdays of Reparation. Archbishop Coakley is urging parishioners not to give the group the attention they seek, but to pray and make acts of reparation. I hope all reading this will make reparation by taking the Fatima message to heart and living it.

For several months now, I have been reading every book I can get on Fatima. I believe Mary's apparitions there hold the key to our future. Why? Aren't private revelations optional? They aren't doctrine and believing in them isn't necessary for salvation, right? In one sense that statement is true. The only thing necessary for salvation is to follow the two great commandments, to love God with all your heart, soul, mind, and strength and to love your neighbor as yourself -- no small feat actually. As Jesus said to the lawyer who correctly summarized the law, "Do this and you shall live."


But there is something absolutely compelling about messages from heaven delivered by the Blessed Mother herself, and Fatima is unique among all the apparitions of Our Lady. In many ways it was not a "personal" revelation and apparition at all, but one very publicly given to the whole world with an amazing miracle to confirm and emphasize it.

Let me point out some of the factors, however, that make Fatima different from most apparitions:

I wouldn't want to be this fella on his particular judgement. This fella better repent and make reparation. Jesus is not pleased with those who attack His Mother.

I recently bought a book on Our Lady of Akita. The Holy Mother is quite exact in what is going to happen unless there is a wholesale change in the world.

I have not been involved in first saturday devotions for a few years. A local parish put one on. But, I have a tendency to over commit on spiritual practices tho...

Thanks for the reminder.

Actually, Fatima was not a "private" revelation. The miracle of the sun was witnessed by 70,000 people and the Church has officially approved this public apparition. For more reading try "Fatima Priest" about Fr. Gruner the apostle of Fatima and "Sister Lucia: Apostle of Mary's Immaculate Heart". Yes, Fatima is our future. There are uncountable and fascinating videos on youtube from the Fatima Center, not to be confused with the World Apostolate of Fatima (formerly the Blue Army, who has gone extremely liberal and promoted the false message put out by the Vatican after the assassination attempt on Pope John Paul.

America needs Fatima because our Lady commanded the Pope to Consecrate Russia so her Immaculate Heart would reign which would rid the world of Satan for a period of peace. ( She will crush his head)and allow Her stated promised period of peace. It is very wrong to separate the devotions of Fatima from her(and her Son's) request for the Consecration. the Satanism will continue to grow and worsen until the Consecration is done. It is commendable and brave to fight the Satanists, but to win the war the Pope must consecrate Russia as she requested- our only hope and path to peace.