A Poem: The Reprobation of Hillary Clinton 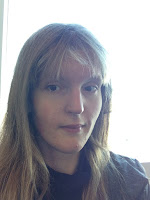 A friend sent me a poem from a young woman named Corinna Swetz who will be 25 next month. I thought it was worth sharing. Unlike les femmes who love the Lord and fight for the faith as our patron St. Joan of Arc did, la femme Hillary is more like the sorceress involved in the Eucharistic miracle of Offida who advised a young bride to take a consecrated host, burn it, and put it into her husband's food as a love potion. Hillary's blood lust is aimed at the little images of Christ in their mother's wombs. She not only encourages their murder as choice, but enables the butchers who sacrifice them on their bloody altars. May God have mercy on her soul.


The Reprobation of Hillary Clinton
by Corinna Swetz
La femme will receive her due,unrepentant, evil liar;Her dark aspirations condemn her to burn in hell's deep fire. Like trash left for the dump,she treats her neighbors so;Refusing to assist them,while they cry in want and woe.
The silent screams she ignores,
while feeding their killers honey;
She'll tax the meek and humble,
so her cronies can get more money.
She does not feed the hungry, nor of the thirsty think she twice,Therefore, it is sad, but true,she won't gain Paradise.
Repent, O foolish woman,
of your traitorous aspirations;
For America, the Great White Eagle,
shall trump your United Nations.
Learn to shake and tremble,
at the thought of God's just wrath,for nothing stained with malice, shall walk the Golden Path.

The stench of the spread of the errors of Communism right under our noses !!!
Our Lady of Fatima , Pray for Us!!!!