Boys Will Be Boys (And Girls Will Be Girls) 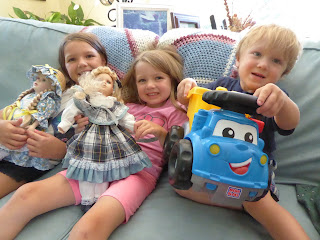 My husband just came back from an outing with three of our grandchildren to the parish thrift store which has all kinds of appealing treasures. He gave them carte blanche  and sent them abroad among the toys to make their choices. He made no attempt to steer them to traditional toys associated with a particular sex.

Surprise! The two little girls (eight and five) came out with gorgeous china dolls. They love Ann of Green Gables and promptly christened their dolls Ann and Diana. The two year old headed straight for the trucks and came home with a great dump truck with lots of room for hauling stuff. I can hear them all now playing in the family room very excited about their new toys.


This got me thinking about my kids growing up. I was always practical and when my first was a girl, I bought mostly unisex play clothes so the next child, if a boy (which he was), could wear the same clothes. I never told my boys they couldn't have dolls. One wanted one and chose "Mr. Green Jeans." The other was completely disinterested in dolls and went for the "boy toys."

One of my daughters was a total tomboy and today is a marathon runner mom with four children. Another who never wanted to wear anything but dresses is also a mom of four who likes reading, crafts and still dresses in very feminine styles. The one I dressed in unisex clothes is a mom of five (all girls) and a great writer with a bent toward philosophy. All five of our children are unique, gifted, and wonderful parents.

Common sense has always shown that boys are boys and girls are girls. If they are raised in households with a dad and mom who interact with them in a healthy manner (as most parents do) they grow up to be exactly what they are. And our society is better off for it. As for looney tune parents like the ones in Canada and Sweden who use their children as guinea pigs in a social experiment, I hope they never experience what happened to this young man who was raised as a girl and committed suicide at 38. And one more point. Many of those who buy the gender identity garbage end up just as unhappy after they "transition." Their stories are often tragic and show what can happen due to problems in childhood like the grandmother who secretly dressed her little grandson in fancy dresses as their little secret. Her poor grandson, Walt Heyer, suffered for years because of Grandma's sick obsession. I saw his testimony on a video and it was powerful. You can watch it at his website.
Posted by Mary Ann Kreitzer at 4:34 PM