Big Catholic Families: What a Gift to the Church and the World! 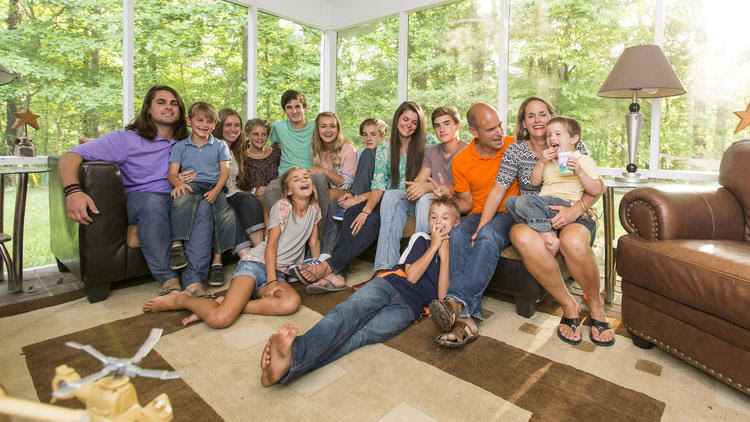 How one family is sending 13 kids to college, living debt free — and still plans to retire early

The Fatzingers could be the poster family for Dave Ramsey, the finance radio guru who always encourages his listeners to live debt free. And, in fact, maybe he could learn a tip or two from their approach to living well with less.

I've always thought of myself as thrifty, but my strategies can't hold a candle to this family. What a revolution if more people would follow their example by both welcoming children as a blessing from the Lord and giving them the lesson of hard work, saving, and money management as well as having fun while living the faith.

That this article appeared in the Washington Post means plenty of secularists saw it who will probably eyeroll over the Fatzingers and declare them nuts. But the seed will still be sown and maybe a handful of souls will have the soil necessary for its growth. As for me, I remember that many saints came at the tail end of large Catholic families. St. Catherine of Siena was the 23rd child.  St. Therese of Liseux was the youngest of five living daughters, but actually the ninth child in her family. St. Louis de Montfort was one of 18 children, ten of whom died in infancy. How many saints are in heaven because of the generosity of Catholic parents and their children? Speaking of the faith and saints, Joshua, one of the older Fatzinger kids, is a FOCUS missionary at the University of Nebraska in Lincoln illustrating that generosity is nurtured in a large family.

Contrast the Fatzingers with the fact that the U.S. has hit the lowest birth rate in our history. We're in a big time baby bust! Think that has no consequences? It's an economic disaster. Consider the consequences of an aging population where more and more resources are needed to care for those who can no longer help themselves. Think of how the culture of death reacts to these "useless eaters" who don't "contribute" to society. We're already seeing moves to ration health care and give the elderly and infirm the bum's rush by refusing life-extending drugs and surgeries and pushing death-hastening "palliative care." If you want to see the horrendous effects of the birth dearth, read about the impact of a declining demographic.  You may also like to watch Demographic Winter and its sequel.

Catholic families like the Fatzingers make me think of the Benediction Hymn, O Salutaris Hostia which ends with these words, "Oh, grant us endless length of days, In our true native land with Thee." They are not only generous to God by giving him many souls, but they are also generous to their "native land." The richest resource of any country is its children even when the stupid policy makers blather about overpopulation and promote child-killing.

Of course, St. Thomas Aquinas, the author of the hymn, was talking about our true home in heaven, but he linked his metaphor to love for one's native land. St. Thomas was certainly no globalist and neither are the popes who have also praised patriotism:

St. Thomas Aquinas...coupled together these two devotions, to parents and to country (Summa Theologica, 2a, 2ae, Q. 101). Dealing with the virtue of "pietas," dutifulness, he writes: "The principles (or origins) of our being and governing are our parents and our country, which have given us birth and nourishment. Consequently man is debtor chiefly to his parents and his country, after God. Wherefore, just as it belongs to religion to give worship to God, so does it belong to "pietas," in the second place, to give worship to one's parents and one's country." Thus, ...patriotism comes within the sphere of virtue, duty, and moral obligation....

Pope Leo XIII, in his Encyclical Sapientiae Christianae set forth patriotism as a moral obligation based on natural law. "If," writes the Pope, "the natural law bids us give the best of our affection and of our devotedness to our native land so that the good citizen does not hesitate to brave death for his country, much more is it the duty of Christians to be similarly affected to the Church." (Source)

So raise a glass to the Fatzingers and all large Catholic families who are rearing souls for God and their native land. In a darkening world, they give me hope for the future because the strength of a community grows from the bottom up within the domestic church of the family. The true, the good, and the beautiful don't come from the big white house on Pennsylvania Avenue, but from the little white cape cod on main street where the family gathers around the table to receive their daily bread and worships at the table of the Lord on Sunday.

No matter what happens in November; no matter who enters the White House, the Kingdom of God will continue to grow among us in strong Catholic families nurturing and spreading the faith! Want to do something for God and country? Fr. Paul Marx who spent so many years fighting for the unborn, often said if you want to do something pro-life have another baby. I'm always happy to echo that message. There will never be too many flowers in Grandma's garden!

May Jesus Christ be praised.
Posted by Mary Ann Kreitzer at 2:52 PM

Are the Fatzingers debt-free? Yes. Are they self-sufficient? Not by a long shot. Read the comments under the Washington Post article.

I read a few of the comments and some were just plain wrong. For example, the one saying the family got food stamps.

There was nowhere in the article any indication that the family was ever on food stamps or on any government dole. Yes, the children have received college aid, the same programs widely available. They also worked to help pay for it. As for getting help from family and friends, isn't that what we all do in our communities? The Amish get together and have barn raisings. We have some Mennonite friends who have neighbors coming over to help them with the haying.

We've always passed around outgrown clothes and bikes, etc. That's the kind of sharing that comes from being part of a community. It certainly doesn't detract from their self-sufficiency. I suspect if those things didn't turn up on the doorstep they would do without. What it reflected was the goodness of their relatives, friends and neighbors. I expect it's reciprocated.

I'm frankly not a bit surprised by all the negative comments. Most people are threatened by the generosity illustrated by a family like the Fatzingers and resent them. (Did you see the comment about how "disgusting" they are for "breeding like rats?") Selfish people need to take them down a peg to feel better about themselves. But from my viewpoint, it sounds like their children will all be contributing, tax-paying members of the community who will be paying for the social security benefits of many who deliberately refused children. All I can say is God bless them.