Chelsea Clinton as Stand Up Comic 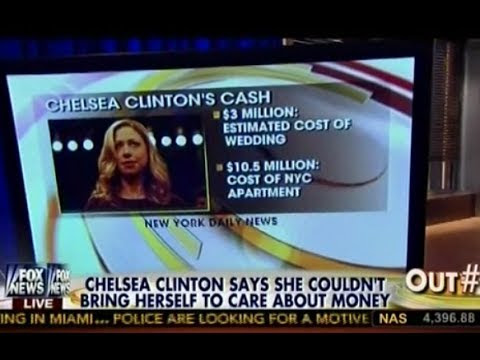 "I tried to care about money but couldn't."

This is hilarious. Chelsea, who right out of college got a six-figure salary and was hired by NBC at $600,000 a year for her exceptional talents (hahahahahahahaha.......) bought a $10.5 million apartment with her husband in 2013. But she just can't care about money. So she joined her parents money-laundering scam used to reward Clinton supporters, aka The Clinton Foundation. One wall street analyst described the foundation as "Robin Hood in reverse":

Do the Clintons, and others who operate the Clinton Foundation, function as Robin Hood in reverse – do they dupe small, modest income donors to enrich themselves and cronies?...

Ortel’s principal charge is that the Clintons and those running the Clinton Foundation have devised an elaborate scheme to steal from hundreds of thousands of small contributors worldwide, as well as from larger donors, including foreign donors.

The Clinton's are experts at fraud, manipulation, and theft. The Clinton Foundation took in millions after the earthquake in Haiti to rebuild  infrastructure, but never produced. Instead they helped a donor defraud the government out of $30 million for the earthquake victims. It was Clinton relatives and donors who benefited from Haitian relief, not the poor citizens of the devastated country. Where did the $34 million taken in by the Clinton Foundation go? Who knows? But one can't help wondering how much went into the deep inner pockets of the Clintons' trenchcoats.

As for Chelsea, it sounds like she's just one more Clinton sleazeball who's learned the lessons and embraced the Clinton legacy: preach personal poverty, attack "greedy" businessmen who create real jobs, and pocket as much money as you can in return for political favors.

Chelsea doesn't care about money? What a laugh. She needs to change her routine. Maybe a banana peel prat fall would work. Her current joke is falling flat.

Didn't I read somewhere in the past year where Chelsea had no idea how to pay an electric bill or where the money came from to do that? More than likely she had never seen the bill since someone else does that for her. In other words, she has no idea how to work for a salary, budget money, pay bills and have enough left over to buy food and clothes, not to mention something one might want instead of need....like taking the family on a vacation to the beach.