It's St. Andrew's Feast Day and the Start of his Christmas Novena 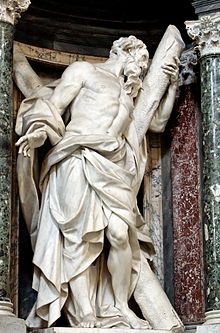 I love St. Andrew. What a gift he had for bringing people to Christ! He brought Peter; He brought the little boy with the loaves and fishes. What a humble missionary heart he had -- not even considering himself worthy to die on the same type of cross on which our Lord suffered.

I call my guardian angel Andrew because I want my angel to lead me to Jesus. (And for those who go ballistic about anyone calling his angel by name, I asked my spiritual director who is a priest and he affirmed it. I am not claiming to know the angel's real name, but I'm confident it's not, "Hey you!" My other choice is Angelito because I'm sure my angel is one of the little ones since I'm small potatoes on the angel assignment registry.)
Here is the St. Andrew's novena with an introduction from the EWTN website. I'm starting it today and invite you to join me!

May this Advent be the best preparation ever for each of us!

Beginning on St. Andrew the Apostle's feast day, November 30, the following beautiful prayer is traditionally recited fifteen times a day until Christmas. This is a very meditative prayer that helps us increase our awareness of the real focus of Christmas and helps us prepare ourselves spiritually for His coming.

Hail and blessed be the hour and moment In which the Son of God was born Of the most pure Virgin Mary, at midnight, in Bethlehem, in the piercing cold. In that hour vouchsafe, I beseech Thee, O my God, to hear my prayer and grant my desires,
[here mention your request]
through the merits of Our Saviour Jesus Christ, and of His blessed Mother. Amen.

Fr. Ripperger (an exorcist) had warned us once in a sermon (and I also think it is in one of his recordings online) to NEVER name your Holy Guardian Angel. First, it is because when you give someone a name, that gives you a certain type of power over that being (which, obviously, you do NOT have power over your HGA). Second, it is because you may actually be calling upon a demon -- and that wouldn't be wise for obvious reasons.

While I am sure your spiritual director meant not harm, I think I would heed Fr. Ripperger's caution on this one.

Padre Pio called his angel "Angelino" (little angel) as a term of endearment. Can't I consider Andrew a term of endearment as well? After all, Angelino is also a "name." Padre Pio had no intention of "naming" his angel and I have no intention of "naming" mine either.. Andrew means "brave" so when I call my angel Andrew I am recognizing a quality that all angels have. If they weren't brave they wouldn't make very good guardians would they?

In recent days, I wrote about the Great Whore and referred to this verse from Revelation to John [18: 4b]: "Go out from her, my people; that you be not partakers of her sins, and that you receive not of her plagues. " On the evening of November 30, I went to a solemn mass (in the Tridentine Rite) in the church of Saint Andrew the Apostle, which has its authentic relics. For reasons beyond my control, I had to leave this congregation. I left the church first, in the shoes I received as a gift from Peter (my brother). Saint Andrew is the First Called. No, my name is not Andrew, but I left as the first of all present there.
That same evening, around 11 p.m., I went out into the yard to throw garbage and when I turned around I saw a bright meteor on the west side of the sky. On my house "stood" the North Cross (Swan constellation): the meteor went from Adromeda, cut the North Cross, passed King David (= Vega, the brightest star in Lyra constellation) and immediately went out. It all happened after the first vespers of Advent 2019A.D.