At Akita, an approved apparition, Mary warned that bishops would be against bishops. Haven't we seen that daily during the past month as a select group of heterodox bishops in the Amazon synod hall were resisted by orthodox bishops excluded because they couldn't be counted on to put on an Amazonian face?

By logical extension, then, it's no surprise that laity also are warring against laity. Which brings me to the Facebook battlefield, a wasteland where "friends" engage in daily armed conflict flinging text back and forth like grenades.

I recently got into a "discussion" on Facebook (the more fool I!) over a Catholic school that would not send its students on a field trip to hear the lesbian astronaut speak. Interestingly, while serving on the space station, she committed an arguably criminal act getting into her partner's bank account. Headlines opined about the "first crime in space." What a role model, eh? I can't remember her name offhand and don't care enough to look her up. She is not the point of this post. Facebook is and the nonsense that masquerades as discussion.

It's really kind of pointless to get into it with anyone on Facebook, because no really engages in intelligent argument (in the Socratic sense). I should have just ignored the post, because I know where this always goes. Yelling and ad hominem attacks by text.

And, sure enough, that's what happened. I defended the school's decision and argued that someone in a same sex marriage was hardly a good role model for Catholic students. I also said if parents wanted to take their children to the talk, they certainly had that option. Parents are, after all, the primary educators of their children. If they want to scandalize them by exposing them to drag queen story hours or to talks by those engaged in public scandal, that is on their consciences!

The gal whose wall I was on, the older sister of a student I had at St. Louis School in Alexandria, immediately went into attack mode implying that I was homophobic and would reject my children if they were gay. I better watch out, she wrote, because they might commit suicide. (She's well brainwashed in the LGBTQ playbook.) I replied that my kids could never do anything that would make me stop loving them, but that I love the truth, and would also admonish any of my children or grandchildren who were fornicating or committing adultery. Same-sex lust, a mortal sin, doesn't get a pass! Then I wished her well and left her page with no plans to return.

This is what a generation of brainwashing has done to these young adults. She is passionate, she says, about "injustice" and the school, that simply chose not to participate in the event, is unjust. Of course all her friends piled on to say that this is why people leave the Catholic Church and how awful it is, and on and on and on with a few choice words for me as well.

And so I withdrew. Who needs that. I never unfriend anyone, but I sometimes unfollow or hide those committed to illogic and nonsense or are living (and boasting) about a lifestyle that breaks my heart. Life is too short! I can pray for them without disturbing my peace of mind by reading their nonsense.

Actually, the only reason I stay on Facebook at all is to keep up with family members I would otherwise not hear from. I love to see photos of my nieces and nephews and see photos of their little ones and hear about their activities. Other than that, I consider Facebook a hellish invention of the devil to waste time, cause dissension, and destroy lives of those foolish enough to let it. I don't spend much time there.

Think of all the private information on Facebook that really isn't private and can come back to haunt one. Occasionally I have advised a relative or friend to take something off facebook for their own protection and even that has gotten me viciously attacked and unfriended at times. Ah well.

What I find odd and amusing is when someone who's done that tries to re-friend me. How stupid do they think I am? If I were a bird would I land on the shoulder of someone who had previously plucked off my feathers? Only if I were truly bird-brained! 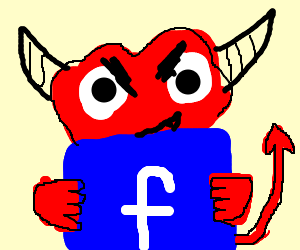 With regard to internet exposure, I'm sure if I tried to get a job today, say as a substitute teacher, my blog would doom me as a hate-filled, racist homophobe whose a fat cow and ugly as well.

Since I don't expect to go back to work (paid work that is), I choose to shrug off that risk and speak the truth in season and out regardless of the consequences. If someone thinks I'm not speaking the truth, I'm happy to respectfully engage in a discussion. I have on occasion taken a criticism to my spiritual director, a priest, and asked for his advice. I've changed or deleted posts more than once because of that. I will not, however, treat an ad hominem attack as respectful engagement.

Anyway, pray for my young acquaintance. She's a mom and the decisions she makes and the example she sets will affect her children. I'm offering my rosary for her today and for her family. I knew her parents very well during our 30+ years in St. Louis parish. Her mom and I spent several years together in a Cursillo group reunion. Her dad is as solid as a rock. I wish her and her family nothing but blessings and I loved teaching her younger sister who is also a lovely young mom. But this experience emphasized to me once again the toll the culture of death is taking on our children. Many of the adults in that generation have lost the ability to reason well. It's the devil's gift that keeps on taking.

Our Lady, Seat of Wisdom, pray for us.

I find it very refreshing that you and I have virtually the same thoughts on many subjects. I also pray for all our children, grandchildren, and family members who have been brought up in this culture. I am ashamed of the so-called Catholic Education that they supposedly had at our expense. It doesn't stand up to what we were taught. I am grateful that my grandchildren are being raised in the Orthodox Greek Religion (their mother, my beautiful daughter-in-law is Greek). It is basically the same faith that I profess which is Roman Catholic but I believe the Greeks are much closer right now to the faith of Jesus Christ, our Savior.

The thing that amazes me is how those who speak the most have the least to say.

One of my favorite expressions is "Only a little person has to step on someone else to make themselves feel big."

"Actually, the only reason I stay on Facebook at all is to keep up with family members I would otherwise not hear from. I love to see photos of my nieces and nephews and see photos of their little ones and hear about their activities. Other than that, I consider Facebook a hellish invention of the devil to waste time, cause dissension, and destroy lives of those foolish enough to let it.”

Well said - exactly why I stay on.

Emails do the same trick when sending pics to relatives or keeping in touch.
Do not feed the Zuckerberg beast......get off Facebook. It is actually a relief I am told , though I have never had an account.
Facebook is the near temptation to the sin of Pride. It tempts one to brag and places roadblocks and threats up against the virtue of Humility.
In this day in age it is hard enough avoid sin , but somehow I do not think if She was living on earth today, that Our Holy Mother would have a Facebook account.

The bad far outweighs any good done on Facebook. This homily convinced me to get off Facebook over a month ago. My 7 year old daughter was playing in the living room while I was listening to the video. She picked up on the message, especially the priest telling people to get off Facebook. She asked me about Facebook and that was all I needed to delete my account immediately.

"Pointless to get into it"? No. One thing any debate club will tell you is that the opponents don't try to pursuade each other; they have in mind convincing the audience.
Let's face it. The left dominate social media because we let them, by mistakenly believing that we must be above the fray. We've got to combat that inclination in ourselves and reclaim the forum of ideas.
Division exists only because truth and falsehood cannot coexist. Not only is division inevitable but it is necessary. Especially after this Amazon debacle, the lines of demarcation are becoming very clear. We simply have to speak the truth at all times. That means we will ruffle some feathers and get some dirt under our fingernails. So be it. I for one do not intend to concede the use of social media to those in opposition to God and the Faith. That's been done for far too long as it is.

I agree with you to a degree, Janet, but I will not engage in a forum of repeated insults and ad hominem attacks. I've never engaged in formal debates, but my understanding is that you both get the opportunity to state your case, then respond to the opponent's points. There are rules and I don't believe you are free to just personally attack the other.

Sometimes to withdraw is a strategic move.

I agree. State your case so that it's understood if not appreciated. Rebut their standard slogans. What I fear is good people withdrawing from the conversation altogether and completely refusing to engage.