Mainstream Media Liars Are At It Every Minute of Every Day....

Everyone knows the mainstream media are a bunch of liars who don't care about reporting the news, but spinning it. They did it bigtime against President Trump and continue to censor and virtue-signal against Trump supporters. Did the MSM even blink, much less call for the deplatforming of those who encouraged violence against Trump and his supporters and continue to do so? Let's look at just one.
Reza Aslan, former CNN host, posted this on Twitter in 2019: 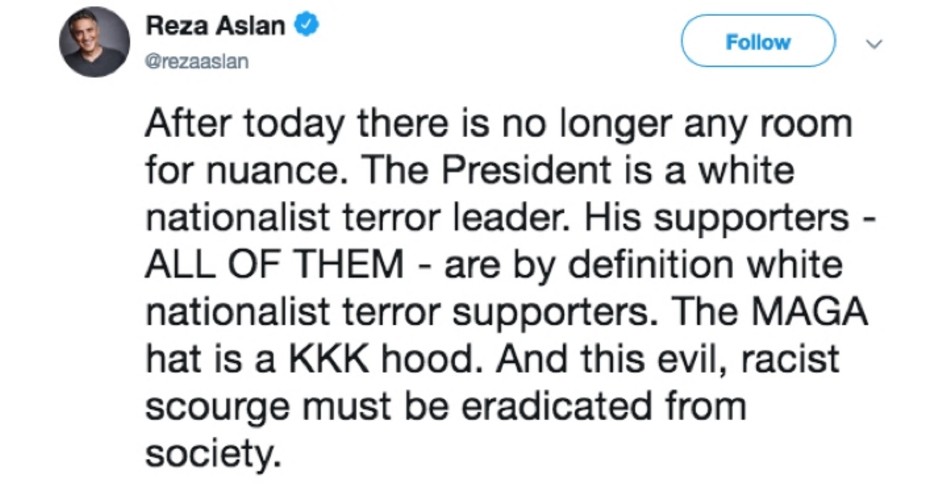 Aslan's Twitter feed is a relentless diatribe of hate calling for violence against Trump and his supporters. He also described Covington student Nick Sandmann, falsely accused of "attacking" liberal provocateur Nathan Phillips, as having a "punchable face." When Twitter users called for discipline, Twitter responded that Aslan didn't violate their policies. Apparently, none of Aslan's hate-filled screeds deserve censorship. Whiled CNN fired Aslan for describing President Trump as "a piece of sh*t" in 2017, his calls to "eradicate" Kellyanne Conway and other vicious statements get the ho-hum treatment from both Twitter and Facebook.
Needless to say, Twitter never punished Aslan for his call to mass genocide of Trump deplorables although Aslan deleted some of the tweets himself. As for Twitter, let's face it -- Jack Dorsey agrees with all the hateful rhetoric spewed by the left. Their selective enforcement of policy shows exactly that. Look at some of the photos on Twitter.
As we prepare for another inauguration, federal troops are being called up all over the country. Funny...the liberals didn't say one thing about all the violence against the Trump inauguration in 2017. Do you remember seeing any of this? Listen to those calling for Communism, destroying property, physically blocking people from their constitutional right of freedom of assembly. This is what the left with their allies in the MSM have supported for the past four years, not only at the inauguration, but in cities all over the country. In case YouTube takes this down you can access it at Rumble. The link is provided in this Gateway Pundit article.
A few more items of interest showing the total hypocrisy of the MSM.

Apple CEO Tim Cook Defends Parler App Suspension: ‘We Don’t Consider That Free Speech’
Humpty Dumpty rules the left. Remember what he told Alice? "When I use a word it means just what I choose it to mean -- neither more nor less." That gives an entire new meaning to the left's mindless mantra of "freedom to choose." It means whatever they like from "choosing" among hundreds of genders and pronouns to "choosing" to kill little babies, to "choosing" which groups may enjoy freedom of speech and freedom of assembly.
As the country prepares for the Humpty Dumpty-in-chief to leave his basement and enter the oval office, retain your faith, your courage, and above all your sense of humor. There will be much to mourn in the coming days, but also a lot to poke fun at. Just think of the state of the union speech!
Posted by Mary Ann Kreitzer at 11:16 AM

Can't wait for our Commander in Thief to wax prolific.

Reza Aslan needs a brain check however that's hard to do with a person who was Muslim then converted to Christianity then reverted back to Islam - that evil racist scourge which must be eradicated from the face of the earth.