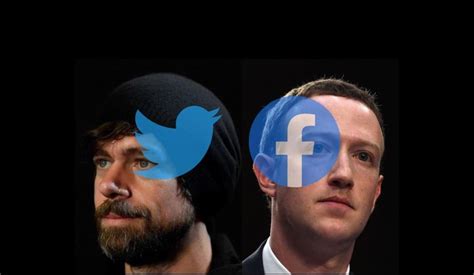 And it couldn't happen to two more deserving tyrants. Some good news among the ruins! These guys love money and power and what they don't realize is that all power resides in Christ, not in the world. "What does it profit a man to gain the whole world and lose his soul?" You can't buy your way into heaven.

And now some observations about Zuckerberg and Dorsey's absolute hypocrisy. Guess who still have accounts on Facebook and Twitter:

John Sullivan, founder of Insurgence USA and a BLM organizer who was arrested in Provo, Utah in July for inciting the riot that killed one person and injured a number of others. An article from the GrayZone gives a lot of information about the radical and tries to minimize his connection to BLM, but he was a speaker at a D.C. BLM rally last August, so that rings a little hollow. On the other hand, maybe he just jumped up on the podium and grabbed the mike. In any case, he is a real insurrectionist vs. the accusations against all 74 million Trump supporters. But Sullivan still has a platform on Twitter where he throws the F bomb around like Halloween candy and his group Insurgence USA has a page on Facebook. He was charged on Wednesday for participating in the the Capitol protest. Will Twitter and Facebook deplatform him? Don't hold your breath!

Nicolas Maduro, President of Venezuela, charged with some of the worst human rights violations in the world. U.N. investigators describe him as "a monster." Maduro is charged with "crimes against humanity" including over 8,000 government instigated killings. Think about that. Donald Trump gets the hobnailed boot from Dorsey because he disagrees with the president politically, but Maduro is a-okay on both Twitter and Facebook.

Ayatollah Khamenei, anti-Israel leader of Iran, also has accounts on Twitter and Facebook. But you gotta give Dorsey credit. When the Ayatollah questioned the reliability of the Wuhan vaccine, in his concern for the people of the world, Twitter removed the tweet. Dorsey truly is a guardian of the universe.
Hatred toward the police is systemic on Twitter with calls to kill cops. One vicious tweeter is Ben Baller, jeweler to Kanye West. A 2016 article describes how he tweeted he wanted to kill 100 cops and praised cop murderer Christopher Dorner, calling him a "legend." Needless to say, Ben Baller is still on Twitter.
Parler got thrown off Amazon servers for allegedly failing to control violent content. What a joke! Every leftist thug who wants to organize and stir up animosity, including Democrats in Congress, like Maxine Waters, AOC, Kamala Harris, etc. can spew their poison on Twitter and Facebook. Only conservatives are cancelled.
So maybe it's time to ditch Dorsey and Zuckerberg. I have and I have no regrets. Meet me on MeWe and if Parler returns I have an account there too.
In the meantime, let's meet virtually. Whenever you pray the rosary pray for me and I promise I will be praying for you. Heck, I even pray for the trolls who stalk my blog. I never post their comments. I don't even read their comments. When I see their monikers (They never use their names.), I just drop them in the trash bin. But I pray for them. I don't want anybody to go to hell if I can help it. Please join me in praying for our enemies. Remember the little shepherd of Fatima, Jacinta, who had such a heart for "poor sinners." Pray for their conversion.
My Jesus I offer all my prayers, works, and suffering for love of you, the conversion of poor sinners, and in reparation for sins against the Immaculate Heart of Mary. Amen.
Posted by Mary Ann Kreitzer at 5:00 AM

Perfect advice. My husband and I cancelled our Twitter and Facebook accounts last week. The Facebook was hard for me because I used it to keep up with my family out of state but I have email addresses now so I can use them. I have also added praying for the conversion of Joe Biden and Nancy Pelosi back to the true Catholic Faith for the salvation of their souls. I do not want anyone to go to hell as Our Lord loves them and suffered and died for them the same as for me God Bless you.