On America's "Royal Road of the Cross" with Jesus and Mary 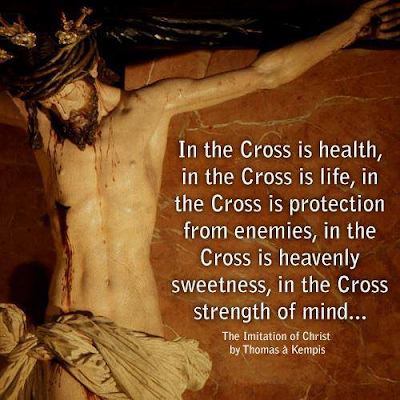 As part of my new year's resolution, I study a chapter from the Imitation of Christ and the Imitation of Mary every morning. I recommend both as a prescription against discouragement during these unsettling times when many are anxious and fearful. Those anxieties and fears resonate with me as well. With the Biden/Harris calamity stripping our Constitutional rights daily, anxiety and fear are normal, human reactions. We need a program of resistance based, not on human action, but on heaven's battle plan.

It's definitely foxhole time in our country!

Jesus and Mary always have the answers. Hard times offer an invitation to push back first with serious prayer and sacrifice. When we need the proper perspective on the battle below, we need to climb to the mountaintop to see the big picture. Now is not the time to run and hide in the catacombs, not yet anyway. It's time to pick up our cross and follow the Supreme Commander and His 12-star general. The cross is our most effective weapon against the evils of our day: our sword, our buckler, our shield, our AK47, our tank, our nuclear bomb. The weapons of the world fail against diabolical evil. Grace has saved many countries from the devil's plan without a shot being fired.

Our push back battle begins on the "royal road of the cross." The Imitation of Christ teaches that, "The weaker the flesh becomes  through affliction, the stronger the spirit is made by inward grace." It is that inward, transforming grace that can change the world.

And whom did God choose as His instrument of change? Mary, a humble, young teenager with no power, no influence, nothing to identify her as someone set apart by God but whose "fiat" echoes down through the centuries to our own day.

She speaks in the Imitation of Mary saying, "My child, in many passages of Sacred scripture the Lord promises to protect those who trust in Him. Never let yourself be dismayed then, as you carry out His commands, however difficult they may be. Hope in Him and He will help you.... Should you be exposed to the sneers and insults and persecution of malicious men, do not lose heart, for the Lord is a stronghold for the oppressed, a stronghold in time of distress...."

What encouraging and consoling words for us as we watch the distressing, and even diabolical, actions of the new administration that destroy the livelihoods of millions and the actual lives of the most innocent among us. But Mary puts it all in perspective, "Providence does not always liberate the upright from all fear and danger, nor does it always give them in their need the kind of help they want and ask for. But its plans are no less wonderful, whether it releases men from need or leaves them in it, whether it avenges them against injustice or leaves them to be its victims....In affliction God gives them the grace to be patient, and thereby bestows a greater blessing on them than if He were to overwhelm them with prosperity....Have recourse to the Lord, therefore, in your every need; abandon yourself entirely to Him. The help you receive may not always be clear and startling, but it will nonetheless be real and strengthening."

The battle always begins with prayer, but doesn't end there. We are the Church Militant. But consider that the greatest threat to an evil tyrant is not physical weapons, but words. Who did the Nazis see as their greatest enemies? St. Maximilian Kolbe and his printing press and Dietrich von Hildebrand with his weekly newspaper published in Austria with the aid of Chancellor Engelbert Dollfuss. Who sat in the Russian gulag sending out writings on scraps of paper that exposed Stalin's evil? Alexander Solzhenitsyn! The pen, indeed, is mightier than the sword and the Word of God, the truth, is the most feared weapon on earth. Our duty as Christians is to speak it in love.

Beautiful, encouraging, realistic post! Thank you so much, Mary Ann!