Archbishop Cordileone was scheduled to ordain ten men to the permanent diaconate on May 28th. According to reports, James DeWan was one of them, a man with a history of homosexual advocacy and promotion of same sex marriage. Only nine men were ordained on Saturday. Was James DeWan among them? I watched a good bit of the ordination ceremony. I never heard the men's names announced even when they put their hands between the archbishop's and promised obedience. I pray James DeWan was not among these men. He certainly shouldn't have been!

Joseph Sciambra posted screen shots of DeWan's Twitter feed in 2015. DeWan was clearly an enthusiastic apologist for all things homosexual to the extent of being disgusting and blasphemous. I'm posting a few of the screenshots, because I think people need to know and be warned. Would you let your sons associate with this man? 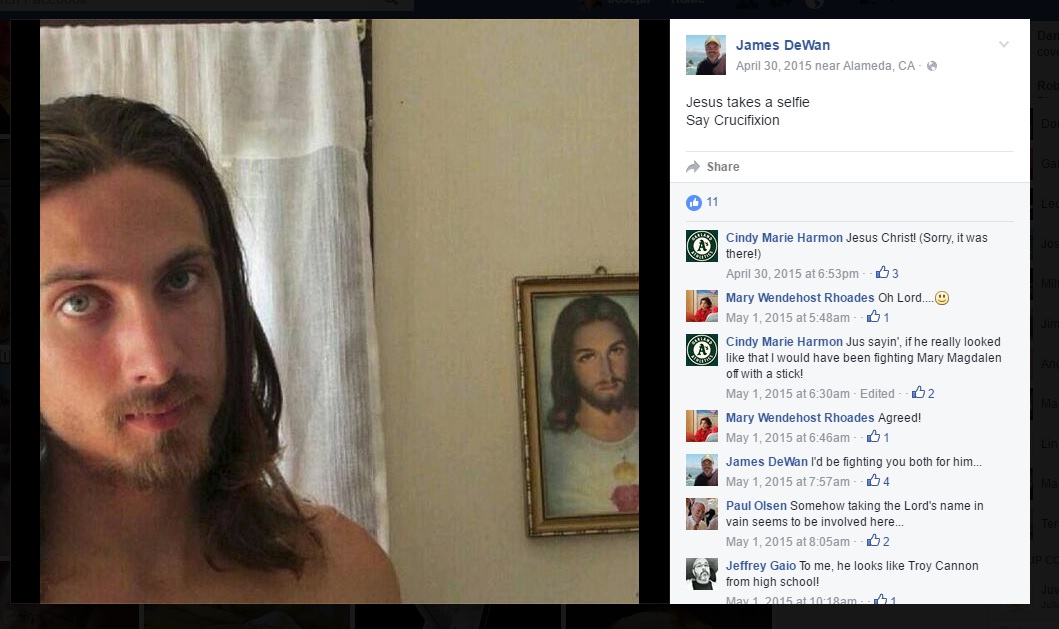 Granted these tweets were posted seven years ago. Has anything changed since then? Since DeWan's actions showed rejection of the teachings of Holy Mother Church, there are questions begging to be asked. Did the archdiocese know about this when they welcomed DeWan into the diaconate program? Has DeWan publicly repudiated his endorsement for same sex "marriage" and the homosexual lifestyle? Has he affirmed his commitment to the teachings of Holy Mother Church including her condemnation of sodomy, a sin that cries to heaven for vengeance?

Even if DeWan has repented, he is not fit for ordination. The apostles selected upstanding men of the community whose behavior was beyond reproach to be their assistants in the work of God. Can anyone honestly describe Mr. DeWan that way?

Vatican documents on the suitability of candidates to the ordained ministry are clear, as, for example the following:

In the light of such teaching, this Dicastery, in accord with the Congregation for Divine Worship and the Discipline of the Sacraments, believes it necessary to state clearly that the Church, while profoundly respecting the persons in question, cannot admit to the seminary or to holy orders those who practice homosexuality, present deep-seated homosexual tendencies or support the so-called ‘gay culture.’” – Instruction Concerning the Criteria for the Discernment of Vocations with regard to Persons with Homosexual Tendencies in view of their Admission to the Seminary and to Holy Orders. [Source]

Sr. Lucia of Fatima warned that, “The final battle between the Lord and the kingdom of Satan will be about marriage and family." Disciplining Nancy Pelosi addressed the murder of the family's tiniest member, a direct assault on the institution of marriage. But what comes first, even before the conception of the baby?

There is no such thing as gay "marriage." It is a sham and an abomination in the eyes of God. And the opinion of James DeWan can't change that.

San Francisco is a hotbed of homosexuality. Rewarding one of homosexuality's cheerleaders by raising him to the ordained ministry is incomprehensible. When you reward evil, you are cursed to get more of it.

Let us pray that the missing tenth diaconate candidate was James DeWan and not someone absent because he tested positive for COVID.

If you know, please provide information. The intention to ordain DeWan was public. Now we need to know if it actually happened!

O Mary, conceived without sin, pray for us who have recourse to thee.

I saw the calling of the candidates. He was, unfortunately, among them. My question is if he was the one who promised celbacy? Despite the fact that celibacy is the ideal for all clerics, we know that, in practice, nearly all permanent deacons are married, and they become deacons because the priesthood is unavailable to them. Some celibate permanent deacons were, perhaps, religious brothers before. Some, perhaps, have been incapable of the rigors of seminary formation (which isn’t all that rigorous, even though it should be). Suffice it to say, it is rare to have a celibate permanent deacon, and it was not clear which one was making the promise. But, DeWan was definitely ordained.

There is not much we can do about the destruction of the church. If any of us could do anything, we would. It is tragic. We all need to come to grips with our reality, because it's looming large now. We are in a period of time when it's going to be tough to be a Christian. It already is. We see how the culture is spiraling, the world is spiraling, because there is no one to lead, and the flock scatters because there is no shepherd to lead them. Cling to the True Shepherd, and let that be enough. I'm not saying do nothing, but in truth we can do little and these people will drive us nuts if they can. Don't let them.
When God in His good time wants to end it, He will. We should do what we can, but this is a God-sized problem. These men are active destroyers or cowards. We have few on our side. On God's side. Hang on and hang tough.

ALL deacons, married or not, have promised celibacy, which entails perfect and perpetual continence, whether the man is married or not. Neither the single nor the widowed deacon is free to marry.

The law has been ignored/flouted ever since the restoration of the permanent diaconate.