THE LEFT is Outraged: Vandalizing Catholic Churches and Crisis Pregnancy Centers as Well as Threatening the Supreme Court!

Update: Adding more photos of vandalized churches and pregnancy help centers from yesterday's LEFTIST hate crimes. Links and photos at the bottom. The vandalizers are the ones who went out, like Judas, in the dark when "it was night" and they could do their dirty work in cowardly secret. At least the haters who went into church services were willing to risk something (besides their souls) to practice their hate. No one can accuse those LEFTISTS of being lukewarm. Ruth Sent Us are the organized haters. They hate Christ and they hate his tiniest images, the babies in the womb waiting to be born. What a bunch of godless bullies! 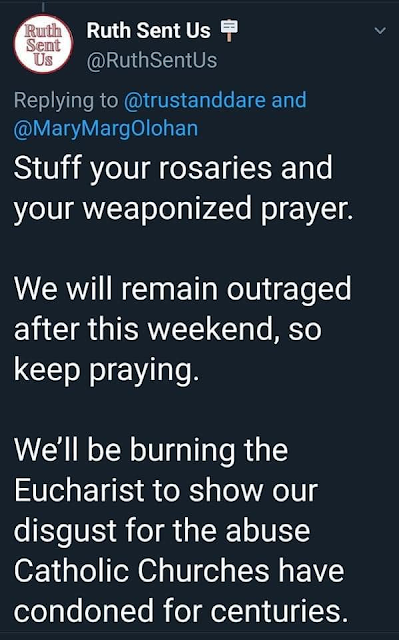 But wait a minute! The liberal LEFT are kind and peaceful people who love children! That's why they want to kill them, because they know they would have terrible lives and are better off dead. Leaving friendly message on churches and tearing up crisis pregnancy centers to keep them from helping exploiting women is their way of showing their love.
Besides, women own the little people in their wombs just like slave holders owned the slaves in their plantation "wombs." And everyone should agree that ripping babies limb from limb is a civil right and killing them after birth is also a civil right when their moms want it. So just shut up and stop interfering with the right to kill, you pro-life domestic terrorists!
ALSO! Shut up and stop opposing the right to mentally rape children with gender ideology, critical race theory, and sex ed in schools. Grooming kids for abuse is the school's right, especially when their teachers are the libs of TikTok who happily explain their strategy for brainwashing children.
Hey! When your kids are in the classroom, the "womb" of the educators so to speak, they are owned by their teachers, the administration, and the school board. Parents have no right to butt in and interfere. Children also have the right to question their "gender" and their parents' values and get abortions without their parents knowledge or consent.  So shut up, parents, you have no rights over your children during school hours or any other time for that matter. The kids belong to the state.
Got that?
Photos and links about vandalized churches and CPCs from yesterday's hate crime:
A Madison, WI CPC was set on fire with threatening messages spray painted on the building.
In L.A. the Cathedral was invaded. Costumed Protesters Disrupt Mother’s Day Mass in Los Angeles
St. Patrick's in NYC was also a target.
A CPC in Frederick, MD was also vandalized.
Was your church or CPC invaded or vandalized? Leave a message with link in the comments.
Posted by Mary Ann Kreitzer at 5:00 AM

Update on THE LEFT'S violence and attacks on churches and pregnancy help centers yesterday.

An SSPX chapel in my neck of the woods.

This is the true face of pro-abortion. Vulgar and hateful, they would desecrate old St Patrick’s cathedral if those young men weren’t guarding the doors. Apologies in advance for the blasphemy spouted by this pathetic soul…

These are desparate abortion deranged women. Who may not be able to bring themselves to confession because Father Twinkie is on the other side of the door, laughing. Homosex priests are an oxymoron and are a thumb in the eye of married couples trying to remain chaste. When the Church sweeps THEM out by annulment, the remnant confessionals will be flooded with women (and men) veterans of abortion.

I'll say they have really gone off the rails. I was in Twitter and I posted a piece the Lapanto Institute put out about a former Church of Satan head wizard who told about how he used abortion clinics to use the aborted babies as human sacrifices. The next day all the Satanists came out of the wood work attacking me. Mainly insults but I started blocking them and there were just too many that I finally deleted my account. These people really creeped me out. Naturally they denied the story was factual and I was told I was a stupid Catholic that had to learn to read and did not know the difference between church of Satan and some other Satan organization. Shoot Satan is Satan what else is there to know. Needless to say I am out of Twitter, Elon Musk or no Elon Musk. Its just a filthily sewer. So now I am in gab. Here is the article I posted that got all the spawns of Satan all cheezed off! https://tridentinecatholic.com/sa.pdf If anyone can say a St. Michael prayer in my behalf I could sure use it and appreciate it.

Abortion is obviously the black beating heart of Satan, the demonic sacrament that best draws humanity into union with the black Angel, the eternal enemy of Jesus Christ - Immanuel, God With Us (Matt 1:23).

As it appears there may be a threat to this black sacrament of death, the disguises and restraints all come off and the true nature of hell is revealed in all who have given their heart to hell.

A corrective remedy, if I may, is this remembrance of Our Lady of Fatima, as sung by Andrea Bocelli - who was given by God the most beautiful voice on earth. The interesting thing about Bocelli? His mother was advised to abort him 65 years ago. She had appendicitis during her pregnancy. Her Italian Doctors told her he would be born with *defects*. But mother Bocelli, faithful Catholic that she was, ignored the evil Doctors and gave birth. Sure enough - her son Andrea was born with congenital glaucoma which rendered him blind by age 12. But in the economy of God, little Andrea was given the gift of his heavenly voice that the world has been blessed with for 60 years ... thanks be to God!

Emma Bonnino, close confidant of Pope Bergoglio, has been aborting children and advancing the cause of abortion for the lifespan of Andrea Bocelli - both are in their 70s. Andrea Bocelli stands as a shining star in the firmament of God - an example of the beauty, value, sanctity of all life ... no matter their gifts. *Even if the life is but a mere shepherd girl or boy, they are still infinitely valuable*, as shown in this little clip connecting Life to Our Blessed Mother. (Please Watch This).

Waiting for your response and prayers for the victims of the Buffalo supermarket shooting which killed 10 and injured 3. The suspect was an 18 year old white supremacist who drove 3.5 hours to kill innocent black folks because of his racist ideology!
( don't think you will say a single word of course)

Thanks for alerting me. I hadn't heard about it. Haven't had the TV or radio on today.

Any shooting no matter the color, age, sex, nationality, or religion of the victims is evil. And yes, I will be offering my Mass tomorrow for all the victims and their families and I hope readers will do the same.

Now let's hear you condemn the systematic murder of black babies targeted by Planned Parenthood that sets up their killing centers in minority neighborhoods. They kill minority babies at a rate much greater than white babies. Since abortion began the number of blacks murdered by abortion, equal to the total number of blacks in the country in 1960.

From the Washington Examiner --

"The tragic reality is that 79% of Planned Parenthood abortion facilities are located within walking distance of neighborhoods that have proportionately higher populations of black or Latina women. An analysis of census tract data clearly documents that this kingpin of the abortion industry targets women of color, selling them the illusion that they must choose between career advancement and the lives of their babies. Any doubt about this skewed impact on women of color would be dispelled if Planned Parenthood were to publish data on the proportion of its abortion clients who are minorities. Planned Parenthood pointedly declines to release this data."

Those who advocate abortion are the real racists and white supremacists. They are also elitists who don't mind hobnobbing with "clean" blacks like Obama (Biden's words) who are rich, powerful, and liberal. (Oprah has no problem being accepted by the elitists.) A distinguished black like Clarence Thomas, Larry Elder, Walter Williams, Candace Owen, etc. is dismissed as an "Uncle Tom" or an oreo (black on the outside, white on the inside).

Thank you for the recommendation. I did watch the clip and it was chillingly beautiful.

Anonymous 8:49 said “… don't think you will say a single word of course“

Why in the world would you say something like this? This comment merely reveals an acidic anger within yourself, just looking for random targets upon which you can relieve yourself.

How about this … We remember these victims of violence as men and women - not “black folks”. They are the same as you; as me. No different. I don’t care what motivated the shooter. Every criminal has reasons. No crime ever makes sense. Leave his reasons to himself. You and I, and everyone else can do the courtesy to the victims to remember them in their full humanity, children made in the image and likeness of God … NOT “black folks”.