History Repeats Itself! Read Medical Science Under Dictatorship to Understand the Fauci Agenda 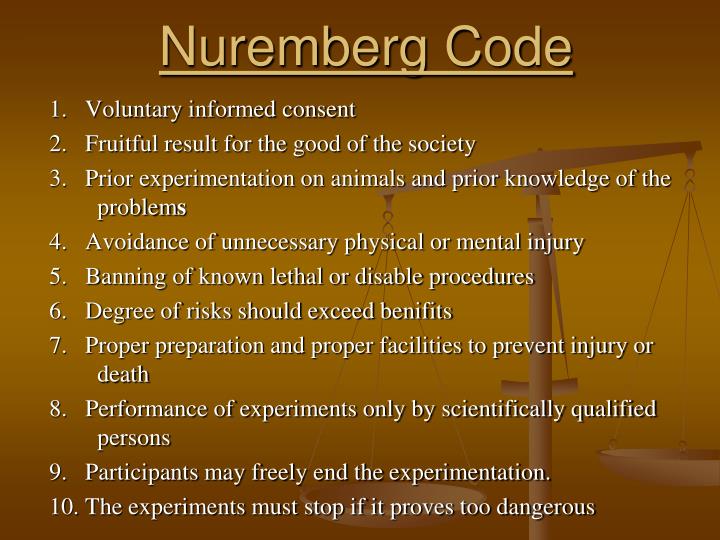 Knowledge of history helps people understand the present and avoid the mistakes of the past. When will we learn that? If you are ignorant of history, you will be taken in by all the latest brainless schemes and shell games. Let's take a look at an important paper published in 1949 that is as relevant today as if it appeared in the morning paper, Medical Science Under Dictatorship by Dr. Leo Alexander.

Dr. Alexander was a psychiatrist and the chief medical officer advising the Nuremberg War Crimes Trials after World War II who contributed to the Nuremberg Code of ethics. He was particularly concerned about the failure of the medical establishment to protect the vulnerable members of society and studied why that happened. From the very first paragraph of his paper, it's clear that we in the United States and the global community are experiencing the same things that happened in Germany under the Third Reich. Only we are seeing the atrocities applied globally!

Most people don't realize that the philosophy of murdering the "useless" wasn't Hitler's idea. it was based in a book by a judge and a medical doctor. Dr. Alfred Hoche and Judge Karl Binding wrote The Release of the Destruction of Life Devoid of Value, published in 1920. They argued that suicide and euthanasia, including deliberate killing of the sick, elderly, and useless should not be a crime. Therefore those engaged in it should be "released" from any consequences.  Think about these two men writing this evil book that was a staple underlying the Reich's euthanasia program! A DOCTOR, one who presumably took the Hippocratic oath and heard the admonition, "First do no harm!" became a protagonist for medical neglect and murder. A JUDGE, supposedly committed to defending human rights, denied rights to those he considered useless or unfit without a meaningful quality of life. They set the stage for the culture of death and advanced it!

Medical Science Under Dictatorship is a must read for anyone who wants to understand what we are dealing with in the medical madhouse of COVID 19. The first wave of COVID became a prime opportunity to eliminate useless eaters in nursing homes. That's where over 1/3rd of deaths took place. Was it deliberate? I think a good argument can be made that it was. Some of the Frontline Doctors who worked with those in nursing home had few if any deaths with the protocols forbidden by Fauci and his quack cohorts. They wanted the vax and nothing but the fax. An effective treatment negatively impacted that outcome. Why vaccinate if there's effective treatment that prevents death and gives the sufferer natural immunity?

Yes, we are dealing once more with medical so-called science, actually quackery, politicized and used as a power and control mechanism.

I'm only going to publish the first paragraph of Alexander's article in this post with my comments. I'll likely do more posts on this important work later.

Science under dictatorship becomes subordinated to the guiding philosophy of the dictatorship. [If you live in a culture of death, "science" will be abused to meet the goals of the tyrants. The common good will be irrelevant. The good of the dictators is the "guiding philosophy."] Irrespective of other ideologic trappings, the guiding philosophic principle of recent dictatorships, including that of the Nazis, has been Hegelian* [See footnote.] in that what has been considered "rational utility" and corresponding doctrine and planning has replaced moral, ethical and religious values. ["Rational utility" is ultimately the ethic that the end justifies the means. It's totally contrary to Catholic belief.] Nazi propaganda was highly effective in perverting public opinion and public conscience, in a remarkably short time. [Deja vu! How many Catholics immediately accepted a jab developed by cannibalizing unborn babies? The collapse of moral ethics was almost universal and immediate thanks to the flawed teachings of Pope Francis and his progressive allies.] In the medical profession this expressed itself in a rapid decline in standards of professional ethics. [Never before have sick people been told to stay home with no treatment, not even advice to take Vitamin D and anti-inflammatories. The typical advice was stay home until you're dying and then come to the hospital to be put on protocols that almost ensured death! like Remdesivir and ventilators.] Medical science in Nazi Germany collaborated with this Hegelian* trend particularly in the following enterprises: the mass extermination of the chronically sick in the interest of saving "useless" expenses to the community as a whole; the mass extermination of those considered socially disturbing or racially and ideologically unwanted; the individual, inconspicuous extermination of those considered disloyal within the ruling group; and the ruthless use of "human experimental material" for medico-military research. This paper discusses the origins of these activities, as well as their consequences upon the body social, and the motivation of those participating in them.

Dr. Alexander was a hero, a psychiatrist and neurologist who authored part of the Nuremberg Code regulating moral and ethical guidelines for medical experimentation. These guidelines have been completely ignored during the COVID debacle with people forced to be guinea pigs for the unapproved, experimental jab! Dr. Alexander died in 1985. I'm saying a prayer for him today in thanksgiving for his defense of the vulnerable. He would be appalled at our current medical dictatorship! He summed up the crimes of the Reich saying:

"Whatever proportions these crimes finally assumed, it became evident to all who investigated them that they had started from small beginnings. The beginnings at first were merely a subtle shift in emphasis in basic attitude, basic in the euthanasia movement, that there is such a thing as a life not worthy to be lived."                                           --Dr. Leo Alexander at Nuremberg

*If you are unfamiliar with Hegel, Peter Kreeft offers this brief summary of Hegel's radical ideas:

Pantheism: the notion that the distinction between Creator and creature, the distinctively Jewish idea, is false. For Hegel, the world is made into an aspect of God (Hegel was a pantheist); for Marx, God is reduced to the world (Marx was an atheist).

Historicism: the idea that everything changes, even truth; that there is nothing above history to judge it; and that therefore what is true in one era becomes false in another, or vice versa. In other words, Time is God.

Dialectic: the idea that history moves only by conflicts between opposing forces, a "thesis" vs. an "antithesis" evolving a "higher synthesis." This applies to classes, nations, institutions and ideas. The dialectic waltz plays on in history's ballroom until the kingdom of God finally comes-which Hegel virtually identified with the Prussian state. Marx internationalized it to the worldwide communist state.

Necessitarianism, or fatalism: the idea that the dialectic and its outcome are inevitable and necessary, not free. Marxism is a sort of Calvinistic predestination without a divine Predestinator.

I just posted this on twitter. My test to see if Mr. Musk has changed anything. As I read this article I had flash backs of Fauci superimposed on Dr. Mengele. The similarities are frightening.