Archbishop Cordileone Undoes with his Left Hand What He Did with his Right! 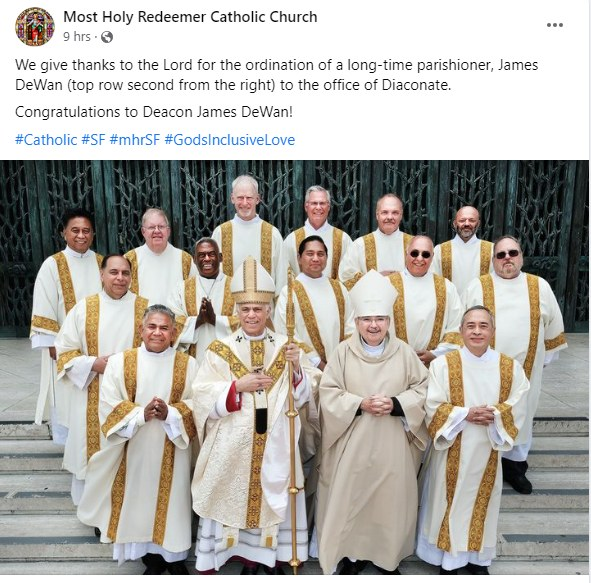 Well, friends, I checked with a contact in the San Francisco area about whether homosexualist cheerleader James DeWan was ordained to the permanent diaconate on Saturday by Archbishop Salvatore Cordileone. I posted yesterday asking for information about the missing candidate, since ten were scheduled for ordination and only nine attended. I hoped and prayed that the archbishop had better sense than to ordain a man with so scandalous a background who is obviously unfit for ordained ministry in the Church by the Church's own directives!

Unfortunately, DeWan was, in fact, ordained. Here's the response I received from my northern California friend:

Yes on the ordination. There was a guy missing but not him and my contact didn't know why. Don't know anything about him. I can tell you the program is quite solid although the new class will have a different guy in charge. They had the parishes where the deacons came from and where they were going and one was the notorious MHR (Most Holy Redeemer) but my contact didn't know if they had one or were receiving one.

The archbishop with the "heart of a lion" apparently has feet of clay.

I'm reposting a few of DeWan's disgraceful tweets here like the one above. Frankly I'm shocked at what Archbishop Cordileone has done and so grievously disappointed. Of course the San Francisco archdiocese is notoriously pro-homosexual and Archbishop Cordileone inherited a lot of problems. It seems rather foolish to give himself more.

DeWan isn't the only permanent deacon whose behavior is shocking. In 2017, another permanent deacon brought scandal to the archdiocese. "Openly gay" deacon Brian Bromberger was investigated for articles and actions in flagrant violation of Catholic teaching. Some of his articles for The Bay Area Reporter which celebrates sodomy are too pornographic to review here. While the diocesan spokesman said the deacon was being investigated in 2017, he apparently got a pass since he continues to be listed among priests and deacons with faculties in the archdiocese. See the PDF from October 2021. Meanwhile, he continues to write for the The Bay Area Reporter and to applaud the gay lifestyle.

WHAT'S WRONG WITH THIS PICTURE?

Every person on earth no matter how committed to mortal sin should be treated with kindness. But to allow active homosexuals and those who shill for homosexuality to serve at the altar handling the Body and Blood of the Lord is shocking and sacrilegious! We know from Michael Rose's book, Good-Bye Good Men that gatekeepers in the seminaries locked out manly men who embraced Church teaching as "too rigid." Instead they welcomed gays into the priesthood giving us the scourge of child sex abuse where a high percentage of those molested were young teen boys groomed, fondled, and raped by gay priests.

That the problem was male on male abuse was confirmed by the John Jay report. What kind of bishop, in the light of all we've seen, happily ordains men with perverted and disordered sexual lives? Even if they don't act out on their disordered inclinations, they are not fit canidates for ministry. Their view of life is skewed, like looking at your image in a fun house mirror.

I remember reading years ago about a Canadian bishop who publicly stated that only men who would make good husbands and fathers should be ordained to the priesthood. How right he was! And the same goes for the permanent diaconate.

Archbishop Cordileone can't have it both ways. You can't defend the assault on the family by aborting its youngest and most vulnerable members, and then turn around and embrace the assault on the family through homosexuality and same sex "marriage." It's like raising two roosters and still expecting to get baby chicks. The archbishop's actions are schizophrenic! In one act he defends the family; in the other he attacks it.

To discipline Nancy Pelosi and forbid her from receiving Communion was a pastoral act for the good of her soul. To allow an active gay man to function as an ordained minister and ordain another who rejects Church teaching and cheers for sodomy and same-sex marriage is not only not pastoral, but scandalous!

We are left with one more betrayal by a bishop whom we believed was an answer to prayer. How many more shocking disappointments must we endure. How many times will we have to carry the heaviest cross of all, the betrayal by our own spiritual fathers?

I can no longer praise Archbishop Cordileone. I can only mourn and shake my head as I think of Nancy being denied Communion while two champions of sodomy not only receive the Body of Christ but serve at the altar and are presented to the faithful as worthy ministers to preach and teach the faith they mock by their actions.

May God have mercy on Archbishop Cordileone.

Our beloved church has stage four cancer, metastasized.
There is pretty much nothing we can do about it. The cancer invades every cell and every system.
We need to turn it over to God and pray, and work to strengthen our relationship with Him.
Try to find peace in a world gone mad. Try to bring others to Christ.
I say this not at all to discourage anyone. When we are weakest, God is strongest. We are not defeated, God sees all and in the fullness of time, He will act. Stay in a state of grace. When we meet God, and our hands are full of little acts we did for love of Him, that is the most important thing in the world. He knows our hearts and what we desire, good for His church and people. This is so far beyond us now. But not for Him.

Your work here is a service to the Church. Thank you for what you’ve done to take this beyond rumor into fact, so that the Faithful can act according to a well informed conscience. Thanks be to God!
Aqua

Get red pilled and go to the SSPX to escape the Novus Ordo Matrix.

It doesn't add up. Why does Cordileone accept homosexuality but not abortion-promoting Catholics? Doesn't he know that we will find out about this?? Is he that dense that he thinks people will accept him because he has come out against Catholics who promote abortion and forget about his promotion of homosexuality? I want to hear his explanation of all of these accusations. It's only fair.

To ednoral: I suspect that Abp. Cordileone actually gets a lot more pressure from homosexualists than he does pro-aborts, given his archdiocese. That could explain his behavior. But the truth is, he's always been a squish on faith and morals, vis-a-vis Church doctrine.

His Excellency has a soft spot for sodomites especially New Ways Ministry. He not only went east to visit their office in Maryland but also got them tickets for favored seating at FrankenPope's Wednesday public audience in St. Peter's square during one of their annual pilgrimages to Rome. They could have contacted a Maryland archbishop who also has a softspot for sodomites for such tickets!

It seems to me like politics in the world, our Church leaders use similar tactics to appease their flock. Ted Cruz months about spoke on the senate floor and then contradicted himself the next day when interviewed by Tucker Carlson. The people who watch CSPAN don’t watch Tucker and so both parties base their judgment on the information they receive. If it weren’t for this blog, I wouldn’t have know about this. Although, I had a suspicious feeling and questioned why Archbishop Cordiolone didn’t do this years ago. I don’t like duplicity, especially in the Church.

I agree, Java Man. It is truly a sign of corruption when Church leaders act like the CEOs of the corrupt mega-media moguls and companies like Starbucks and Ben and Jerry's with their poisoned coffee and ice cream filled with abortion and sodomy. Here's a list of 50 evil companies that support child-killing.