What a Difference Faith Makes: The Story of Two Dying Women

Brittany Maynard (29) is dying of inoperable brain cancer. One can only grieve for this young woman's ordeal and the fear that must accompany it. She's scheduled her check-out day for November 1st because she wants to celebrate her husband's birthday on October 26th. And she's made her final days a crusade to promote physician-assisted suicide in every state in the nation. She's working with Compassion and Choices, a group with roots in The Hemlock Society. Rita Marker, an expert on the history of the euthanasia movement often points out that the movement to legalize "mercy killing" isn't about the right to die, but the right to kill. And it grew out of The Hemlock Society whose founder, Derek Humphry smothered his first wife, Jean, when drugs failed to kill her. He then drove his second wife Ann (who participated in the killing) when she developed breast cancer years later. (See here.) Brittany, no doubt, hasn't got a clue about the history of this group making her the poster girl for their deadly agenda. What a coup!

Kara Tippetts is dying as well - of metastasized breast cancer. But she is facing her ordeal with faith. She recently wrote a book, The Hardest Peace: Expecting Grace in the Midst of Life's Hard.  She continues to blog her story of life at Mundane Faithfulness. Instead of turning to death, Kara turns her face to life -- to live every minute trusting in God and seeing suffering, not as a curse, but a grace, In a letter to Brittany she wrote, "Suffering is not the absence of goodness, it is not the absence of beauty, but perhaps it can be the place where true beauty can be known....Knowing Jesus, knowing that He understands my hard goodbye, He walks with me in my dying." She expresses a deep compassion for Brittany's suffering saying,  "My heart longs for you to know Him in your dying. Because in His dying, He protected my living. My living beyond this place." 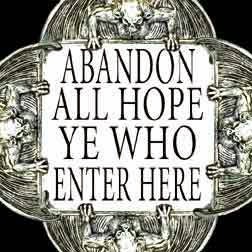 These two women are putting faces on another battle in the war between the culture of life and the culture of death. One is the champion of death and despair; the other is the champion of life and hope. Which way will our culture go? With the courts so often having the final word, I fear we can expect the same result as the battles over abortion and same-sex "marriage." Nevertheless, we must continue to fight and witness to life!

It's ironic that Brittany plans All Saints Day to commit an act that can only be described as a blasphemy against God. Let's beg all the saints to intercede for her that the grace of God reaches her heart and saves her from walking through the gate with the sign, "Abandon all hope ye who enter here." Even if she goes through with her suicide continue to pray. Remember Jean Vianney telling the grieving widow of a man who jumped from a bridge to his death that her husband repented between the time he jumped and the moment of his death. We cannot know the final end of anyone, even those who commit suicide. I'm praying the Chaplet of Divine Mercy for Brittany today. Will you join me?
Posted by Mary Ann Kreitzer at 11:05 AM

Beautiful writings from Kara. My prayers will go out to Kara, too.

It seems like (but probably not in reality) I am spending much of my prayer time asking for not only pardon for my sins but for other un-repentant sinners.

Not sure where I found this quote but I've been using it (and the thought behind it) when discussing mercy and euthanasia with folks who think otherwise.

Malcolm Muggeridge: “Jesus healed the sick, raised Lazarus from the dead, gave back sanity to the deranged, but never did He practice, or include, killing as part of the mercy that occupied His heart. His true followers cannot but adopt the same attitude.”