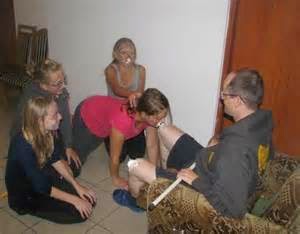 The Polish former papal nuncio to the Dominican Republic, Joseph Wesolowski, who's under house arrest in the Vatican for sex abuse of minors in the Caribbean nation should move over. Read the article below and ask yourself what the heck is going on when a priest trains children to lick his body and has them on their hands and knees in front of him at the level  as his crotch. Where exactly does that put their faces?

This "Father Director" and the nuns who are enabling this perversion should all be under house arrest at the Vatican with Wesolowski!

Think about it. This priest is perverting the minds and hearts of minor children. And he continues his sick antics unmolested by Vatican discipline. Meanwhile, six priests of the The Franciscan Friars of the Immaculate are suspended a divinis (a severe punishment usually restricted for serious crimes) for attempting to leave the Institute and be incardinated in a diocese. What canon law does that violate? Isn't it a priest's right?

So can someone explain exactly what is going on ? Anyone? Anyone?

(Hat tip to Gary. Thanks for the email!)
Posted by Mary Ann Kreitzer at 9:28 PM

that is in the list of the most aweful,sick,inhuman,unlawful,and downright disrespectful,ungodly,and sick thing ive ever seen like how can you do that to children?like that's ungodly