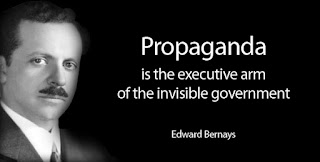 A friend recommended the documentary, The Century of Self, and I'm finding it fascinating, especially the impact of Freud's nephew, Edward Bernays, an expert at manipulating the masses using psychological techniques that identified their underlying desires. Bernays was diabolically brilliant!

It certainly explains Madison Avenue manipulation and political propaganda. Planned Parenthood is using it right now with their hiring of a "crisis management firm" to control the disaster caused by the release of the videos showing their barbarism.


As I'm watching this documentary, Saul Alinsky comes to mind and his manipulation of people to gain power for the organizers. Watch it, it's fascinating. Below is a trailer. Here's the link to the full documentary. For some reason the part 1 link is bad so watch it here. Note that Bernays entire life was devoted to manipulating people by connecting whatever he was being paid to promote to "feelings." Connect a product to a good feeling and consumers would buy it. But it wasn't just goods that could be sold, evil philosophies could also be sold that way. Look at how abortion has been sold? By linking it to freedom, personal choice, and power for women.

"People must be trained to desire...man's desires must overshadow his needs."

Bernays saw the "masses" as stupid and irrational. They had to be corralled and controlled by their betters. Sound familiar? The next time you get a solicitation by phone or mail note how feelings (guilt, compassion, anger, etc.) are being manipulated by the marketer and remember Edward Bernays.

Watch the documentary. It explains a lot. One thing it emphasizes to me is that if you are not connected to God and His will, you will be easily manipulated by tactics that come right out of hell, "enlightened despotism" as Bernays daughter calls her father's philosophy. The documentary also shows how evil is first conceived in the mind. I've only finished watching part 1, but I look forward to the rest. It raises a lot of questions in my mind. I wonder if Bernays knew Margaret Sanger and the other early eugenicists.

Labels: Edward Bernays, manipulating the masses, propaganda, The Century of Self documentary

Read e.Michael Jones libido dominandi for what is probably an even greater zoom-out on the situation.