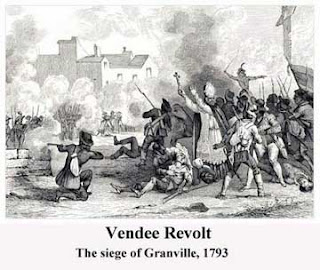 Solzhenitsyn Mourned Bastille Day. So Should All Christians.

"Tuesday, July 14 probably passes without much fanfare in your home, but the date, Bastille Day, marks the beginning of the greatest organized persecution of Christians since the Emperor Diocletian. This day, the beginning of the French Revolution, also planted the seeds for the murderous ideologies of socialism and nationalism that would poison the next two centuries, murdering millions of believers and other innocent civilians...."

The story of the uprising in the Vendée.should be in the memories of every Catholic. Those Peasant-apostles of truth fought to restore Catholic France, but most died agonizing and bloody deaths. How many Catholics know anything about their courageous brothers and sister who fought so valiantly under the banner of Christ?

Teach your children about the cost of discipleship. We see it throughout history, not only in France. We see it in the Roman coliseum, in Queen Elizabeth's England, in the Medieval battle against Islam at Lepanto and in the Holy Land, during Russia's Bolshevik terror, in Spain when the Communists murdered tens of thousands of priests and religious, in the Cristeros uprising in Mexico, in the Nazi Holocaust against religion, in today's Christian persecution in the Sudan and in our own United States. Here the raging battle is not yet openly bloody. Our tiniest victims ripped limb from limb are invisible to most and our aged and handicapped victims go out, not with a bang, but a whimper.

Understanding history, true history not whitewashed history, is crucial to an informed Catholic mind oriented to Christ's service. So read the article linked above and especially Solzhenitsyn's address at the dedication of the memorial in the Vendée and teach your children to protect and preserve life from its first beginning until its natural end.

The world says sometimes you have to destroy the very thing you are claiming to defend in order to save it. That evil philosophy is a satanic lie from the depths of hell, but one embraced by progressives who know what is best for all of us. Those who love the truth must expose the lie! Why? Because not just lives are at stake, but souls. The truth saves souls teetering on the brink. Let's proclaim it with courage and charity.
Posted by Mary Ann Kreitzer at 11:19 AM