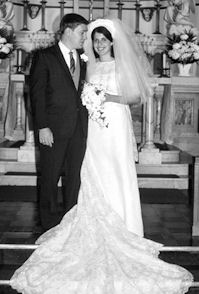 Somebody emailed me today about an article I wrote several years ago which is on the Les Femmes website. Rereading the article, I realized it is as relevant today, especially with the Synod on the Family coming up, as it was when I wrote it in 2010. And so I post some of it here with a link back to the original:


In the past century the relentless attack on the institution of marriage has made it an endangered species. Individuals like Margaret Sanger, founder of Planned Parenthood, John Rock and Gregory Pincus, inventors of the pill, feminist leaders like Betty Friedan, gay activists and liberal politicians have all worked diligently to relegate traditional marriage to the ash heap of history. Unfortunately, some ostensibly Catholic laity and even priests and religious have joined them. In light of this, can the institution survive or is it in danger of extinction? Statistics paint a grim picture with more than 43% of first marriages failing.1Failures rise with multiple marriages. And many cohabitating couples never marry at all. It’s not surprising that this should happen in the century which, according to a vision of Pope Leo XIII, God gave Satan free reign to do his worst.2 But statistics never tell the entire story and, for the Christian, anthropology is incomplete without recognizing God’s intervention. He always gives hope.  (Read More...)

Wow, you really are a GREAT writer. Yes, totally prescient at this time.

Thanks, Gigi! What's funny is sometimes when I go back and read an article I ask myself, "Did I really write that?" I felt that way when I reread this article. I think I have to give the credit to the Holy Spirit.