What Are We to Make of This? Pope Francis, Who Are You? 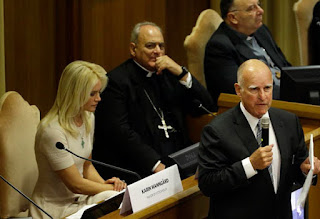 Mayoral Conference Features Only Loony Left US Politicos, Hailed by Francis as “Conscience of Humanity”

How I want to believe we have a pope who is truly a man after God's own heart. How difficult the pope makes it for me to believe it. This latest Vatican meeting adds one more confusing (and toxic?) ingredient to the papal soup pot.

What a photo op for these ghouls of the left all of whom favor ripping babies limb from limb and call sodomy "marriage." But for the pope to label these death peddlers the "conscience of humanity!" It sets my head spinning and my heart aching.


Pope Francis throws out an occasional comment about  the slaughter of the unborn, but expresses nothing like his concern over the disputed issue of "climate change" which used to be "global warming" until it became obvious that the planet is NOT warming. And his enthusiasm for the U.N., one of biggest threats to humanity on the planet by their promotion of population control, "reproductive rights," and questionable education policies.

Who are you, Pope Francis? The secular liberals who promote sodomite marriage and abortion love you. The Catholic dissenters love you. Mothers of big families, on the other hand, hear themselves compared to mindless rabbits. You compare a dying Europe to grandmothers like me. And those of us who have spent a lifetime fighting abortion and contraception basically hear, "Move on; there are other issues."

Today on St. Martha's feast day, I reflect on the work of my adult years trying to foster protection of human life from conception until true death, and I know that it pleases my Lord Jesus Christ who called Himself the Way, the Truth, and the Life. I'm not so sure how pleased he is with Vatican conferences that eulogize the U.N. and call enemies of life the "conscience of humanity."

Pray for the Holy Father and for poor Holy Mother Church and her flock of milling sheep searching for shepherds. We are living in morally dangerous times. Fast and pray that confusion in the Church will not scandalize and mislead many souls into choosing the wide and pleasant path to perdition.

More on the Vatican mayors' meeting:

The Mad Hatter's Tea Party: Moonbeam and Mayors Descend on the Vatican

Pope Lobbies Mayors to Lobby Politicos Above Them

Governor Moonbeam Speaks
Posted by Mary Ann Kreitzer at 10:58 AM

"How I want to believe we have a pope who is truly a man after God's own heart."

and I want to believe in unicorns and fairy dust.

it is what it is Mary Ann....this man, and those whom he personally picks to surround himself with and to counsel him, are evil.

I know. We need to discern the spirits. But doesn't it make you sad? We can mourn even as we face the reality. Even my pastor, who has often quoted the pope favorably, said this morning, "We've had worse popes." Talk about damning with faith praise. Well, we go on working to defend the faith with our eyes peeled for good shepherds, as well as the Good Shepherd. "Come, Lord Jesus!"

Yes. Yes, it makes me bone-crushingly, heart-stoppingly sad. I had to scratch my hear a little bit at your pastor's comment....think I would have been hard-pressed to not blurt out, "name one!" Seriously, we've had some bad popes, but this guy is a whole different species unto himself...the Church has never seen his like. I honestly, from the depths of my soul, think that we're in the eschaton. Have stepped up my prayers for the good shepherds (few though they may be)...they will be GREATLY persecuted and tried....pray for their perseverance; and for ours. Don't know if you saw this or not, but there is no way to spin his posing with this diabolical book aimed at the corruption and damnation of children (!!!) as anything but pure, distilled, crystalline evil.

I did see it. I've been trying to track down the book. It's not on Amazon. Since it was apparently published in Spain I presume it's in Spanish. If you can find the book I'd like a link. I'd like to have a friend of mine who speaks Spanish translate it for me. With today's photo-shop techniques and satire sites that look like real news sites, I always want to make sure things are true before I make a decision about them.

Yes!! I saw that same article on Eponymous Flower today. Thank you Mary Ann for trying to check the facts on this book, and all the details. Before something like this goes 'Catholic Viral' it would be good to find out what's up with this info. Almost too incredibly preposterous to believe, but we've all seen this insanity too many times in two years to discard it altogether. At this point, it's hard to discount anything coming from this guy. I echo the same line I've seen from so many other faithful bloggers: 'When is enough, enough from Francis?'