The Culture of Death Is Showing Its Demonic Face with Pride!

More and more, the culture of death is showing its demonic face in celebration of evil. Last year it was the black Mass in Oklahoma City. A few weeks ago it was up front and personal in Detroit with a Satanic group unveiling a 9-foot bronze statue of Baphomet (Lucifer) flanked by two children looking up with worship in their eyes. (Remember the millstone for those who scandalize children?)


And then, a few days ago, August 10, Kali, the Hindu goddess of death and destruction and fertility rites was projected on the Empire State Building. It was the end of a several weeks of nightly projections showing endangered species. The event included (why are we not surprised) Cecil the Lion. What did we have here? Ancient paganism resurrected where animals are worshiped and pagan gods idolized.

Add another diabolical image to the repertory. You can read the story here. 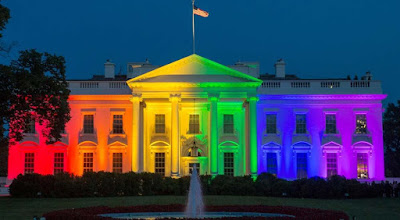 Add to these events the revelations about Planned Parenthood in recent weeks. Some of the videos show the remains of human infants being manipulated and handled on spotless medical counters that remind one of the altars of pagan sacrifice. One of the great crimes of the Canaanites was the bloody sacrifice of their children to the god Molech. Well now, aren't we there? Fifty-three million dead babies is certainly a lot of human sacrifice!

What are all these incidents telling us? The U.S. is becoming ground zero in the battle of the two standards. Those familiar with the Spiritual Exercises of St. Ignatius recognize the reference to the meditation where two armies gather for the final confrontation. Christ and his army gather around the City of God, Jerusalem. Jesus is beautiful to behold and exhorts his troops with great kindness. He stands on the plain with them in humility and urges them to follow Him and take up the fight for souls. A completely different picture appears with Lucifer and his army gathered around Babylon, the City of Destruction. The devil sits on a high throne amidst a scene of fire and brimstone, dark with stinking smoke everywhere and a cacophony of wailing and gnashing teeth. Lucifer screams and threatens the mob of demons below urging his devils to go out into the world tempting and destroying souls in order to bring them down to hell.

Well, it is pretty clear that the battle is heating up and the devil is no longer concerned about hiding his identity. He used to follow the strategy of debunking himself -- you know the little red-caped figure with forked tale and a pitchfork. Everybody laughed and ridiculed the idea of his existence. No more. His minions are worshiping openly these days with public officials like Obama happy to enter into the celebration. And as his idols are raised in various cities what can we expect? It won't be pretty, that's for sure.

Hang on to your rosaries, folks. These events are a warning. You cannot publicly mock the God of the universe and expect His blessings upon you. We are in for a rocky ride and I expect it will partly involve economic collapse. Many in this country have put money and power above everything. They are likely to lose both. Pray and do penance that when things get tough many souls will return to God.
Posted by Mary Ann Kreitzer at 2:19 PM

I thought the Kali image was entirely appropriate for our culture. A culture that kills babies and sell parts to biotech companies that are gene splicing them in to create human mice. It's both terrible and monstrous.

And, while I feel like screaming and jumping up and down everyone around me ignores it or sees it as entirely normal. I hear nothing, NOTHING from the pulpit or from my bishop.

There aren't enough hours in the day for reparation.

I agree. We are far gone. But there are still many "little" people like you and I who DO care very deeply about these blasphemies. And our reparations may not be enough to turn the tide, but we wrap our arms around the cross and add them to Jesus supreme act of love. One drop of his blood was enough to make up for every diabolical crime man can imagine. So let's not lose heart. (I know it's tempting. I feel like climbing under the bed and sucking my thumb.) We are the remnant determined to answer with a resounding "YES!" when Jesus asks, "When I return, will there be any faith on the earth?"

Thanks for the response. I appreciate your time and willingness to provide this place for me (an others) to vent a bit.

Mainly, I mourn for what has been lost to this country and for my children.

A former pastor reminded me a while back that we are heavily engaged in spiritual combat and that we are contending against tremendous satanic forces.

Amen! And sometimes the combatants need to just forget it all and go for R & R. That's what children and grandchildren and mountain trails and riverboating and beekeeping, and good mystery stories etc. are all about. Even Jesus went away to a quiet place. Go there and eat ice cream.

You got the gay priders calling the shots at the Empire State Building and a gay guy living at the White House. When the Detroit statue was unveiled, two guys danced and embraced in all the in-your-face vulgarity they could muster. Does it surprise anyone that living without supernatural grace makes for this kind of trash? Maybe we should be grateful that the devil is so proud of his handiwork that he shows us every bit of its ugliness in bright lights, rainbow colors and evil images.