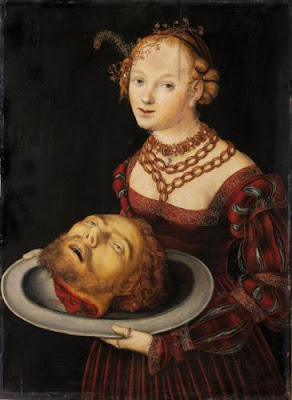 Because her lewd dance delighted him so much, Herod offered Salome anything she wanted even up to half his kingdom. Goaded on by Herodias who hated John and wanted to kill him, Salome asked for the head of John the Baptist on a platter.

"Because of his oath and the guests who were present...[Herod] sent the order to have John beheaded in prison." Matt 14: 9-10

How many times have we done something wrong out of human respect? Do we put man's opinion above God's? Consider, parents, how many times you have (fearing rejection) chosen to support an adult child in sin rather than face the unpleasant task of speaking the truth in love. How many children continue on the path of evil with a dead conscience because those around them, including parents, stroke them in their sin? I would rather die with my children hating me in the hope my witness would help convert them than see them go to hell aided by my ear tickling.
Posted by Mary Ann Kreitzer at 10:06 AM