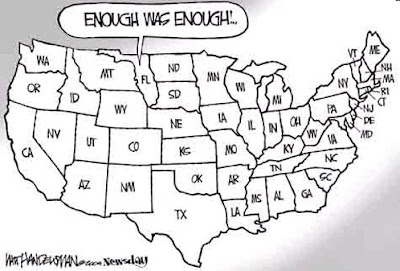 Several years ago, in one of the dozens of hurricanes here in Florida that I’ve lived through (Thank you, Lord), my family and I were seized with hysterical laughter while watching a TV weatherman dressed in bright yellow raingear and boots, standing ankle deep in water (at one point he removed his boots to demonstrate how deep the water was) and clinging to a street sign while shouting into his microphone telling people it was dangerous to be outside in a hurricane and to stay indoors.
Because of high winds it was raining sideways, water had flooded streets and all normal people were already inside. Normal people in hurricane prone states know with high wind velocity and the number of tin roofs and electric wires, that a piece of tin flying through the air can slice a man in half and live wires electrocute people, therefore it’s not wise to stand outside in roaring wind, barefoot in water. Nevertheless, the media, thinking that people are dismally uninformed, persist in reporting on dangerous weather while standing there in it with flying debris threatening their lives merely to warn other people–who would never do that in the first place–how dangerous it is and not to do that.
Therefore it isn't a big surprise that another weather correspondent stands outside in Hurricane Matthew telling people how dangerous the storm is. He at least is standing under one of Daytona’s bridges connecting the mainland to the beach, nevertheless, it remains a highly dangerous situation for him to have put himself in. (There’s a great restaurant under that bridge if you’re ever in Daytona.)

Here’s how normal people in Florida and all other hurricane prone states prepare for hurricanes, in this case Matthew. It’s all very normal, methodical actually, and well thought out and everybody knows what to do just like people up north know how to prepare for blizzards. Self-preservation is, after all, human nature.
People on or near the ocean shutter their windows, then evacuate. Inland, in order to prepare as this particular hurricane approached, on Wednesday people went to grocery stores for supplies they didn’t already have. Mountains of 6-packs of water were in the middle of grocery aisles, however bread aisles were entirely empty. I bought tortilla wraps instead, then summer sausage, cheese and crackers. I already had several tins of tuna, hard boiled eggs, flashlight batteries and an emergency lantern. A hurricane only lasts a day.
On Thursday, workplaces let people off early so they’d be safely home and of course nothing would be open Friday, and most places of employment paid their employees for the missed time. Here at home I brought the animals inside for the night, made a cup of tea, watched a movie then went to bed after reassuring family and friends up north that I was fine and not to worry.
I did worry about Eddie, the homeless man who lives behind the shopping center, but people said that he would probably go to a shelter for the night. I didn’t see him on the way home but wondered what to do if he happened to be there sitting in the rain. I thought if he were there I’d give him $20 and take him to Denny’s if they were open (all night) or to a shelter, or he could come here and sleep on the couch if he promised not to murder me in the middle of the night.
Last night there was a lot of rain, however it was the high wind that blew for hours that was the major sign manifesting Matthew’s danger. Today, Friday, I woke to remaining high winds as Matthew moved further north and people in those areas prepare just as we here in Florida did.
Thankfully, Matthew stayed 15 miles out in the Atlantic and never hit land or else this would be a different story today. I feel terribly sorry for people who have already died and pray that Matthew weakens, stays in the ocean and finally dissipates with no further loss of human life.

Posted by Susan Matthiesen at 4:17 PM

So glad you are safe and the danger is past. Hugs, my friend!

We purchased our water on Wednesday along with the canned goods and bread. Shuttered the house, got the cars in the garage and broke out the candles we never had to use. During the night we listened to the wind and rain and were awakened twice by exploding transformers, although we never lost
power despite all the wind .
If we just watched the television we would have been frightened ,but we said our prayers and felt quite at peace. Today we pray for those still under threat and all the people who died ,especially in Haiti. It was actually good to drive around today minus all the carloads of tourists and others who evacuated.
I admit my husband did look for a room away from the coast across the state Thursday morning . We argued that his timing was just too late. He found just one room in one hotel available and almost clicked the 'reserve' button until he noticed "clothing optional". He suggested we could stay in our room but we protested and convinced him we prefer to stay in our shuttered home where clothing is mandatory. So happy we did.

We have a hot springs here in Virginia, the Jefferson Pools, which where Jefferson actually bathed. They built a woman's bathhouse during the 19th century where Robert E. Lee used to take his wife for her severe arthritis. During family time visitors can bathe in either bathhouse, but in the afternoon it becomes "bathing suit optional" and the sexes are segregated. One wonders how that will go over now that people can decide for themselves what sex they are. Needless to say, we only visit the bathhouse during family bathing!

I'm glad you had a relatively benign experience with the storm.