Have You Seen the "Hate Has No Home Here" Signs"? 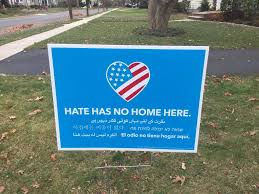 Last week two of these signs on wires appeared on the lawns of two of my neighbors.  We live in a small cluster of homes which are very close together in the planned community of Reston, VA.  It is our hope that the signs will disappear quickly, since from my own interpretation of the "Design Guidelines' of Reston Association, such signs are not allowed.  However, when you consider that "planned communities" such as Reston have a smell of socialism about them to start with, it will not surprise me if the sign campaign is granted an exception to the rule for the sake of the kumbaya coexist attitude that is pervasive in this area of northern Virginia.
As I know these things don't just come out of thin air, I have searched for the root and cause of their creation.
And, in an effort to curb the spread of these things, I have written the message below to the president of our cluster association.  So far I have not received a reply from him.  His meeting with the officers of the association isn't until next week.  I will keep you posted.  In the meantime, please, use the comment box to share with me your own opinions and ideas about this deceptive campaign.  Share my message, if you agree with me, with those you think might also object to being marginalized by what is touted as an "inclusive" and "tolerant" message.

I am sharing a link with you that features another yard sign, which many view as a “Republican response” to the signs in question here in Beacon Hill.  There is a growing number of these signs---Hate Has No Home Here, popping up everywhere.

This link is to an article I perceive is written by a liberal who did NOT vote for Trump in the last election.  In any case, it is the photograph of the “new” sign that I am interested in you seeing. 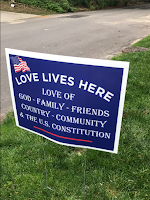 I hope you will agree that a neighborhood full of signs on every lawn is not what would have the best interests of our cluster at heart.  As Republicans and as people who do support the Trump presidency, its agenda, and the goals of its administration, we feel more and more marginalized in this neighborhood which is very obviously left leaning.  Initially, I personally felt left out of neighborhood gatherings because of my age, and then, because I am a stay at home mother with no career experience, and then, more and more because I am a Roman Catholic with conservative values when it comes to life of the unborn, sex education, compliance with the laws of my country, and the moral behavior of those with whom I associate.

The two signs, which might quickly grow to be twenty, are aimed specifically at people like me.  And however much the creators of these signs expect people to believe they are nonpolitical and desirable, they are aimed directly at those of us who have lines in our lives we are not willing to cross.  In my house, all are not welcome.  That is why I have a lock on my door.  In my house, all lifestyles, all moral behaviors, all forms of population control, all efforts to stifle Catholic ethics and values are not welcome here.  This does not mean I hate the people who disagree with me.  It means only that I do not tolerate and condone BEHAVIOR and IDEAS that fly in the face of my religious beliefs.

The creators of this “sign campaign” are, I am convinced, part of a social justice, community organizer group---not sure exactly which wing, though I believe they are well coordinated and end up at the beck and call of the Democrat Party, whose objectives they advance.  Is it merely a coincidence that this sign campaign originated in Chicago?  Not likely.

Please, realize when you confer with Reston Association about this that whereas the “Hate Doesn’t Have a Home Here”  sign seems “soft and fuzzy” enough to get a pass, it is in fact a very strong political statement which will be opposed in like manner eventually.   Conservatives are very talented and creative people.  I want to believe this is not a war you want to start in this cluster.  I am not the least bit fooled by the “Hate Has No Home Here” sign.  People who install these things hate very much all my choices and my own lifestyle.  They may not hate me personally, but the sign or SIGNS expect all to understand that Trump supporters, Roman Catholics, and Conservative Americans of all sorts will be excluded.

Posted by Chriss Rainey at 1:29 PM

A very similar sign is showing up in yards in my town about welcoming all as neighbors and the words are in English, Spanish, and Arabic.

Your respond is awesome. Please let us know what happens.

I'm fed up with all the virtue signalling from the Left which is what this is about. The part that doesn't believe in free speech, wants to push the transgender agenda, suppress all beliefs that don't fit their victimhood narrative is in fact the source of virtually all the racism and hate and abortion and rage that plagues our society. Their intolerance is intolerable.

Thanks for taking action on this, Chriss! We need more people willing to stand up and push back.

Lol. Defensive much? Inclusion and diversity simply reminds us of what this country was founded on. It's a welcome mat - interesting that this is interpeted as a partisan/liberal affirmation instead of a human/ patriotic one.

You know perfectly well that the Hate Has No Home Here signs were an anti-Trump movement, not a "human/patriotic one." So please drop the act. They are NOT about diversity as the attacks by liberals on people at restaurants and other public places shows. They accuse the people they attack as hate-filled as they harass and throw feces and hurl epithets and even shoot people in the name of fighting Trump's "hate."

Liberals don't want diversity. They want one-world thinking as long as everyone marches to their tune. And if you won't, well watch out because you will pay because you are a Nazi and deserve persecution and even death. Are you among the brown shirts who practice those tactics?

You won't find that here. We let all kinds of folks comment as long as they do it civilly and without obscene or anti-Catholic speech. I always screen those out and, sad to say, there have been plenty. David Hogg seems to have many imitators among liberals.

Why demonize this sentiment and people who share it? If you call this liberal, what are you saying about conservatives?

Read how about the movement:

I appreciate your comment, Penny, and I'd like to believe that "this sentiment" is the work of kind compassionate people who want everyone to get along and respect each other. I can't. I'm an old lady whose lived a long time and seen a lot of hateful people hide behind benign speech to pull the wool over people's eyes. Evil always-always-always masquerades as good.

Unfortunately, whether deliberately or accidentally this project matches the rhetoric of the left that continually uses hate speech and hate actions as they point fingers at conservatives and accuse THEM of hate. These same types of signs and words are LEGION at anti-Trump marches and rallies.

I have never heard a conservative urge other conservatives to hound liberals in restaurants, shopping malls, etc. or to "get in their (conservatives') faces" like Maxine Waters, Hillary Clinton, Joe Biden, Tim Kaine, etc. ad nauseum do. Your question about what does this article say about conservatives is easy to answer. We have our eyes open and we aren't easy to fool.

I went to the link you posted and read some of the nice-sounding stuff. I'd have to know a lot more about the origin of the movement and the political leanings of the founders. When a movement wears the feathers of a downy chick, I want to make sure they aren't glued on over the feathers of a vulture. Check out this article of an anti-Trump rally in Chicago and notice the "Hate has no home here sign." Oh and don't miss the F-Trump sign in the background.

Months have passed since this post was publshed. For "the rest of the story" as Paul Harvey used to say, see a new post by me set to appear on Monday, Nov. 19.