Mattel Announces Hijab Barbie -- Shall We All Celebrate the Islamic Oppression of Women? 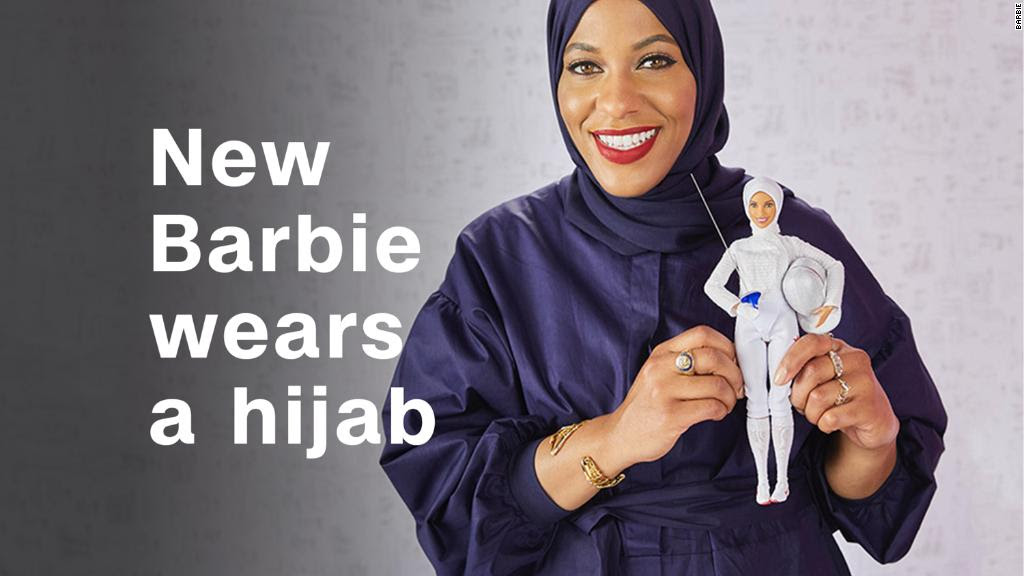 Did you know that the hijab was invented and imposed on Islamic women fewer than fifty years ago?

When Iran made the hijab compulsory in 1979 100,000 women protested in the streets. Women are still protesting today and only 43% of Muslim women in America wear the hijab. According to a 2015 article in the Washington Post linked from the article above, Muslim women say that:

This modern-day movement [to impose the hijab], codified by Iran, Saudi Arabia, Taliban Afghanistan and the Islamic State, has erroneously made the Arabic word hijab synonymous with “headscarf.” This conflation of hijab with the secular word headscarf is misleading. “Hijab” literally means “curtain” in Arabic. It also means “hiding,” ”obstructing” and “isolating” someone or something. It is never used in the Koran to mean headscarf.

In colloquial Arabic, the word for “headscarf” is tarha. In classical Arabic, “head” is al-ra’as and cover is gheta’a. No matter what formula you use, “hijab” never means headscarf. The media must stop spreading this misleading interpretation.

A friend and I were discussing this over breakfast after Mass this morning and she wanted to know whether the doll would wear a suicide vest. We decided Mattel could substitute grenades for Barbie's oversized you know what.

The Florida Family Association is urging people to protest to Mattel. You can do that here.

When I read the article my first thought was, "Can we hope that nun dolls will make a comeback?" Not likely, I guess. It's okay to encourage little girls to be the property of their fathers and husbands (like all Muslims are the property of Allah), but belonging to God the Father as a beloved daughter and being the bride of Christ...well...that's a nightmare to the modern secular mind.
Posted by Mary Ann Kreitzer at 10:31 AM

Has the Islamic Barbie doll had FGM performed on her, because if not, she isn't really Islamic, is she?

Also, interesting that they have the Islamic Barbie dressed in a fencing outfit holding a fencing foil - just to remind us I suppose that Barbie can exchange the foil for a scimitar and behead us in no time flat.

And one last note. When my daughters were young all their Barbies were forever totally naked. Once they undressed Barbie it was too hard for them to put the doll's clothes back on. Just wondering if any little girls will be honor killed for having naked Barbie dolls? Maybe Mattel will create a Muslim Ken doll to boss Barbie around and threaten her for being naked?

Ken is now called Khalib and he comes with his little explosive vest. Ha ha!

Let us pray the Rosary and ask Our Lord to get rid of Islam and Liberalism. Believe me, nothing will work better than praying and penance against this kind of demonic infestation.

The reason she's in a fencing outfit is that she was created in honor of the Olympic gold winner from Rio. https://www.csmonitor.com/USA/Society/2017/1114/Barbie-now-wears-a-hijab-inspired-by-US-Olympic-fencer

The irony is that they are calling the hijab "traditional" when, in fact, it only came into use in the late 70s. Well, hey, if you can drop stuff down the memory hole, you can also create new "traditions" with a finger snap. Come to think of it Kwanzaa will be coming up in another month.

My contrarian perspective: I commend Muslim women who wear the hijab in public who are subjected to ridicule and scorn by nominal Christian women who wear men's clothing [ref: Deut. 22:5] or who are scantily clad like prostitutes.
Several years' ago I complimented a Muslim women who wore a hijab while grocery shopping in Wichita, Kansas; she quietly and impressively demonstrated by her attire and regal demeanor just scandalously dressed "Catholic" women are.

Michael, the Muslima Barbie has on pants, or rather is dressed in "man's apparel". And plenty of Muslimas wear a hijab, which is merely a headscarf, while wearing high heels and jeans which to you is scandalous.

Oh nonsense, Michael. If that lady in the grocery store ever takes off her scarf off her son, her husband, her father, her brother or even her cousin have the right under their law to punish her.

I doubt that a Muslim women is beaten for removing her hijab, please do more research. Modern "liberated" "Christian" women either dress like men wearing trousers or they appear androgynous like many of the post-councilor religious Orders like the Congregation of St. Joseph in Wichita and the Adorers of the Precious Blood.

Are you one of the liberated women?

Michael, I live in Northern Virginia. I have more Muslim neighbors than you've probably ever seen outside of military service or living in Michigan or Minnesota.

Michael, your comment, "Are you one of the liberated women?" indicates that you realize that Muslimas are not liberated. Yet you find it invigorating that Islamic women wear hijabs, and also I assume you like the look of burqas. Why it is that you despise what some infidel women wear and are so approving of Islamic women who are forced to wear clothing that they despise?

It's irrelevant whether or not I've seen Muslim women or not to appreciate that they dress modestly in public; "Christian" women are immodestly dressed whether for Holy Mass or in public.

My response refers to the demonically inspired feminist/sexual revolution of the 1960s where women abandoned their morality and virtues in order to feel liberated; liberated from God's Law women aborted their unborn babies, practiced immoral birth control, "divorced" their lawful husbands, experimented with lesbian relationships, participated in other illicit sexual practices.

The problem with the hijab is the idea that women are inherently inviting sexual attention if they don't cover their entire bodies head to foot. It isn't really about modesty, but about ownership. The clothing you describe as "modest" is a sign of women belonging to their husbands as property. It is part and parcel of a culture that performs genital mutilation on women. When a culture considers it legitimate to murder a rape victim in an honor killing (she must have asked for the rape), there is something seriously wrong. And it is all part and parcel of Islam. https://www.jihadwatch.org/2016/02/islamic-state-stones-four-rape-victims-to-death-for-committing-adultery

I too would like to see women dress more modestly, but NOT because they belong to their husbands and are being forced to do so and would be endangering their lives if they did not. You, in fact, may have endangered the Muslim woman by speaking to her.

I am skeptical of those media reports on Muslim husbands "ownership" of their wives particularly their alleged autonomy of their wives' bodies; Pam Geller's stores are biased because she is an avowed Zionist. However, you will encounter modestly attired men and women who voluntarily wear veils or head covering while assisting traditional Latin Masses every Sunday and holy days of obligation in the Catholic Church.
Parenthetically, stoning adulterers to death was effected by Jews but it was abolished by Christ Himself during His ministry on earth.

Islam treats men and Women In Islam as one, yet they are dissimilar. Based on biological, physical appearance & psychological presence each has been allotted certain roles in the society. Considering the aspects of each creation both have their degree of contribution in leading marital/personal life.