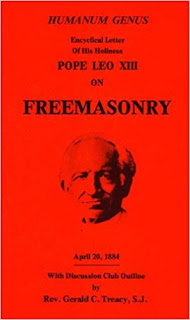 I want to refer you to the Encyclical Letter of His Holiness Pope Leo XIII on Freemasonry, titled Humanum Genus.  I would have linked that title to TAN books, which is the publisher of my own copy, but their webpage doesn’t recognize the title anymore.  In fact they sadly are not selling anything prior to Vatican II, (that I could find) but you will find it on Amazon for about $3.00.
You may be thinking, “I could care less about Freemasonry, so why would I want this?”  I’ll tell you why.  In the last couple of weeks Pope Francis and Freemasonry have been openly discussed in the same breath.  Up to now people have merely whispered about it.  If there ever were a time you NEEDED TO KNOW about this subject, it is NOW.
Humanum Genus, written in 1884, makes it very clear that Freemasonry is a not a generic term but a very real organization, but one which has many others that fall in line with it, that do the bidding of Freemasonry, and which are in fact linked to it in ways only those at the top of some organizations are allowed to know.
Paragraph 9 says:

“There are several organized bodies which, though differing in name, in ceremonial, in form and origin, are nevertheless so bound together by community of purpose and by the similarity of their main opinions, as to make in fact one thing with the sect of the Freemasons, which is a kind of center whence they all go forth, and whither they all return.”
Continuing….
“They speak of their zeal for a more cultured refinement and their love for the poor, and they declare their one wish to be the amelioration of the condition of the masses, and to share with the largest possible number all the benefits of civil life.  Were these purposes aimed at in real truth, they are by no means the whole of their object.”
Today we talk about “the deep state,” but this is, frankly, as deep as it gets because it is in fact in league with Satan.
The entire letter is only 37 paragraphs long and takes up only 22 very small pages.  This is an easy read and while it is 135 years old I cannot say it anymore emphatically than to say, CATHOLICS!!!!!!  READ THIS DOCUMENT NOW!!!!!
Paragraph 22 speaks of Political Doctrines and paragraph 23 says under subheading “Communism the Sequel,”
“That these doctrines are equally acceptable to the Freemasons, and that they would wish to constitute States according to this example and model, is too well known to require proof.  For some time past they have openly endeavored to bring this about with all their strength and resources; and in this they prepare the way for not a few bolder men who are hurrying on even to worse things, in their endeavor to obtain equality and community of all goods by the destruction of every distinction of rank and property.”
You thought Freemasonry had no connection to socialism/communism?  Think again.  You thought Freemasonry had nothing much to do with the Feminist movement, Democrat Party Politics, and LGBTQXYZ?  Think again.  The more you know about Freemasonry, the more ALL of these things will make sense to you and the easier it will be for you to recognize what is behind them.
The second thing I ask you to do is watch this video from The Fatima Center by Christopher Ferrara.  It is 46 minutes long so don’t try watching this as you fly through your daily emails.  Choose a time and devote yourself to watching it.  I’ve seen it twice and could watch it again and just might.  If you can beam You Tube on your big screen TV, I suggest you do that, because this is a presentation you will want to watch in the best condition possible.  The title of the video is “The End Game of Pope Francis.”  The terms socialism and Freemasonry are not mentioned in the video, but remember, the sect of Freemasonry encompasses a lot of people who enable the goals of Freemasonry, as well as groups, organizations, and individuals who embrace their naturalist ideals, all of which is destructive to the Body of Christ, our beloved Church.
For further reading on Freemasonry, I recommend the following:
Posted by Chriss Rainey at 7:30 AM

Thanks, Mary Ann. I have bookmarked the video to watch later.

Freemasonry is just another Jewish political messianic movement, much like Bolshevism/Communism. Consider it Kabbalah for the gentiles. To understand it’s origins, read E Michael Jones’ books: “Libido Dominandi” and “The Jewish Revolutionary Spirit”, and watch his utube videos.I have no doubt that Bergoglio is a gnostic and Freemason, just look how in bed he is with the rabbis down in Argentina. The problem is the Church stopped preaching the Gospel about the Jews (1 Thessalonians 2:14-16), and instead has been collaborating with them ever since Nostra Aetate and Vatican II. The Norvus Ordo Mass is nothing but a freemasonic invention, meant to corrupt the church from within. God help us. Prayer and penance is essential, but we need to raise consciousness among fellow Catholics that this is what is happening to us and why, before the Church can be reformed.

I think it's a little risky to interpret that passage from Thessalonians to make sense of things today, especially making it a blanket condemnation of the Jews. Jesus and the apostles were all Jews and many of the early Christians were Messianic Jews. Today there are many orthodox Jews who are pro-life, pro-family and dedicated to God's law as revealed in the Old Testament. I agree that Jewish atheists are another kettle of fish, but then so are other secular atheists.

I've read Freemasonry and Judaism: Secret Powers Behind Revolution which was written in the 1920's. It's by a Frenchman who tells how French Freemasonic lodges fomented the French Revolution in part with the saying they coined: "fraternite, liberte, equalite". Hmm, sounds similar to what Pope Francis is saying regarding other religions.

Freemasonry and Judaism are inextricably linked and have as their secret goals progressivism and revolution. Are all Freemasons evil? no, although I believe it's still a mortal sin for a Catholic to become a Freemason. Are all Jews evil? no, but for 1500 years the Church advocated restricting Jewish actions in public life because Jews routinely undermined Catholic moral teaching.

Much of what is labelled anti-Semitism is a very successful effort by Jews to shut anyone up who dares criticize them. Also, the vast majority of registered non-profits organizations (501c3) in the USA are Freemasonic lodges.

Thanks Leo. Chriss gets the credit. She's a great ally and contributor to the blog.

The Illuminati, the Pope, and the Secret Societies - https://thewarourtime.com/2014/03/24/the-illuminati/

Thank you for this important post. It amazes me that Freemasonry is no longer part of the Catholic vocabulary or widely discussed as part of Catholic history. Yet, popes have identified it as a great enemy of the Church. Sadly, Freemasonry continues to have an incredible negative affect on our culture and likely our economy. Most Catholics regard as crazy conspiracy stuff. How ignorant we are.

Keep up the excellent work.