Bernie Sanders is running for president, again.  I listened to his announcement speech in this video and it is my impression that he is the most dangerous person to seek public office by election since Adolf Hitler.  Here’s why I think so.  He believes his ascendency is at the right moment in history.  His time has come.
He clearly has in his mind a vision so well thought out and carefully articulated that it would be impossible to distract or deter him with debates or rejections of his proposals.  His “Mein Kampf” agenda is no less ambitious when it comes to major changes in how our country is run than Adolf Hitler's was in his day.

We should not forget that Hitler did not succeed the first time he attempted to gain power either so the fact Bernie did not win in 2016 doesn’t mean he can’t win now.  Bernie suggests in his speech that he wants his campaign to be a “million man” grass roots effort.

Can’t you just see him imagining the roaring crowds in the stadiums and the streets lined with adoring fans as his entourage passes by?  Makes you wonder if he will adopt some kind of uniform like Adolf or Fidel to better play the part.

Bernie’s vision isn’t my vision or your vision.  It is a vision reserved for the planners, the elite, the intelligentsia, the all knowing, and the liberal media, of course, a team of minions Joseph Goebbels would have marveled at.  They will tell the rest of us what our lives will be like when they are in charge.  They promise us wonderful things and little to worry about.  “We are the government, and we are here to help you.”

The character Forest Gump said, “Life is like a box of chocolates.  You never know what you will get.”  In Bernie’s world, he’s sure of exactly what you’ll get and how much of it.  In Bernie’s world, life is like a box of Monopoly money.  It comes in a set with a specific amount of property and a fixed amount of cash.  There can never be any money added to the box and none taken away, but according to Bernie and socialists like him, this box of money has been held in the hands of too few players while some have almost nothing to fend off the perils of Go To Jail and Do Not Pass Go, Do Not Collect $200. 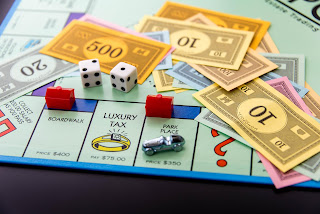 Real life is nothing like either of these things.  Not the chocolates or the game box.  The fact is wealth isn’t finite.  It can grow and it can diminish.  It is not like a pie despite that song from the TV show, the Jefferson’s, in which the lyrics tell us that George is “Moving on up, to the east side.  We finally got a piece of the pie.”  The fact you have wealth doesn’t mean there won’t be enough for me or anyone else.  In truth, we each make our own wealth by trading the value of our ideas, our knowledge, our skills, our time, or our talents in exchange for what we need.

I should not worry about your piece of this imaginary pie being bigger than mine or anyone else’s and I shouldn’t worry about whether there’s going to be enough left for me to obtain what I need to worry less and enjoy life more.

Bernie, on the other hand, with the game box mentality, insists  everything  must be fair, free, just, equal, and sustainable and he’s going to be the one who gets to decide exactly what that is.  The rest of us with Bernie in charge, like the Germans in the 1930’s, can for a while, dance and be merry, drive our little cars on the newly built highways, paid for with the rich man’s money, and perform whatever job the government has in mind for us to do.  We are to tell ourselves it’s all for the Reich, excuse me, the “good of the people.”

And when college is free it will be worth exactly what we pay for it.  No longer will we have a choice of what’s taught because; Bernie gets to decide that too.  In fact, Bernie and company will decide just about everything including how long we get to live.

Why will this appeal to so many people? Because, as Rush Limbaugh said, “These people know don’t know enough about economics to fill a thimble.”  They have been educated in America’s failed school system all their lives and they have no faith at all, or a warped version of one, focused more on “social justice” than eternal salvation.  They have been told it is ok to pursue their dreams because the “safety net” in this country will be there to catch you anytime you need a hand.

I have a friend whose daughter just turned 26.  Her own safety net involved being allowed to stay on her parent’s health insurance plan until a month ago.  She has a degree from a highly prestigious private university and she is smart enough to work and support herself, but she is “pursuing the dream” of being a dancer in New York City.  Apparently she’s a good dancer and she is employed as such, but not at a salary that affords her any security.  She supplements her dance salary with a part time job in a physical therapy office, but those hours are not enough to qualify her for the insurance plan there.

The Bernie message of free healthcare will no doubt appeal to her and who knows how many thousands of others who ignore the truth that real adults take personal responsibility for their lives and don’t trade Daddy’s money in for Uncle Sam’s, even if it means putting aside the make believe world of “I’ve Gotta Be Me,” to become productive members of society, marrying, creating families, and accepting without resentment the task of securing their own lives without government aid.

How many Germans fell for this very lie?  Enough to put Hitler in power and after that they lived with the consequences until they were rescued from their misery by the capitalists in this and other countries who had sense enough to reject socialism in the first place.

We can’t deny that it is at least a good lie as far as lies go.  Checks all the boxes.  Passes the smell test.  Performs well on a short road test.  Solves all the immediate problems.  It’s a little like jumping off a tall building.  It isn’t the ride that’s bad; it’s the landing that sucks.  And the landing is, in every case, unavoidable.

We should teach our kids and grandkids that there’s no such thing as “the world’s wealth,” or “this country’s wealth.” When people think THE WEALTH has been snatched or confiscated by people who are too greedy to share, it is easy to convince them they have a right to take it back.  It is easy for people like Bernie to convince them they are victims of mean greedy people.  That they should have as much of “the country’s wealth” as the next guy because it would be fair and just and it would make us all equal. 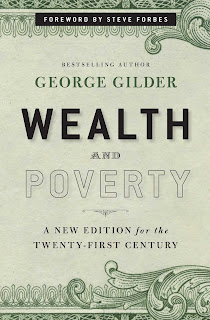 George Gilder, in the book Wealth and Poverty wrote, “Families of zero wealth built America.  Many of the unincorporated businesses that gained some $500 billion in net value since World War II (six times more than all the biggest corporations combined) were started in households of zero assets according to the usual accounts.  The conception of a huge and unnegotiable gap between poverty and wealth is a myth.”

The definition of greed is not simply the guy who has wealth, but rather, “intense and selfish desire for something, especially wealth, power, or food.”  The socialists out there yelling about the rich being “greedy” people should look in the mirror and take a long look at their own greedy faces that covet what belongs to others and the power to seize it.

Socialists would rather dream dreams not of their own success but of taking away yours.  YOU are what stands in the way of their future.  YOU are the cause of their misery.   YOU are the stick in the cog of progress.  YOU are what’s holding up the opening act of Utopia.  YOU, my friends, are the modern day equivalent of the villain in their story.  YOU, the Trump supporter, are the modern day version of the German Juden that must be demonized and eventually eliminated one way or the other.

This is why they can’t simply disagree with you.  They loathe everything you stand for.

They can’t stand your red hat.  They can’t stand the way you smell.  They can’t stand your religion or your family, your morals or your patriotism.  They must hate you for their plan to gain momentum and they must continue to hate you so they have a place to lay blame for everything that doesn’t fall into place.  And they will always hate you because YOU prove to all by living faith filled, well ordered lives that the lie they love better than God pales in comparison to anything they can dare imagine.
Posted by Chriss Rainey at 7:30 AM

Message to Dan Danato -- I chose not to publish the link you sent with the insulting photo. If you want to discuss a post in an intelligent manner, you're welcome to engage with any of our writers. If you just want to call people names by using an obnoxious photo, then go troll someone else's blog. Your response to Chriss' thoughtful and intelligent article actually demonstrated the ignorance Chriss is talking about. And after looking at your profile with the photo of you making an obscene gesture...well.... What would your mother say?