An Ode to Our New Don John, Alexander Tschugguel (With a Hat Tip to G.K. Chesterton)

Once I got it in my head yesterday to write a poem about Alexander Tschugguel throwing Pachamama in the Tiber based on G.K. Chesterton's Lepanto, I was doomed. I couldn't do anything else until I accomplished my goal. The fact that Alexander is from Austria made the comparison to Don John of Austria and his heroic stand against Ali Pasha and his fleet at Lepanto a compelling one. And so here is my ode to Alexander in thanksgiving for his removing the idols from the Church of Santa Maria in Traspontina.


But really, read Chesterton's Lepanto, my inspiration. Talk about a master poet. He is unparalleled when it comes to writing ballads about warriors! After you read Lepanto, I recommend The Ballad of the White Horse about England's Christian king, Alfred the Great, another heroic warrior. And DO read the poems out loud. Poetry is meant to be heard!

The Battle of the Tiber: An Ode to Our New Don John of Austria

(with apologies to G.K. Chesterton)

White founts falling in the Trevi Fountain Square,
Synod bishops smiling as they chatter everywhere.
There is laughter like the fountains in the faces of them all.
It stirs the looming darkness of the German bishops’ call:
“Let’s change the Church in Luther’s style!” Their pastoral decree
Goes forth to all the Catholic world, “It is our destiny!”
“After all,” the Germans say, “we must put on the faces
Of Amazonian peoples to bring change to other places."
"Their spirit world, rich in grace, offers us new tropes,
Renews the rigid, dated Church and brings the young new hope.
The shamans with their chants and smoke teach us all to be
A creative church for all the gods in their diversity.”

It curls the corner of Krautler’s lips that smile and smile to see
The natives bringing Pachamama idols and their tree.
They rattle Peter's garden as on bended knees they crawl
To honor the image of Mother Earth covered with her dolls.
The martyrs in their earthen graves are calling out to God.
While virgins in the Catacombs pray that Michael’s rod
Will once again be lifted to put Satan on the run
Under Mary’s banner and the image of her Son.
The faithful clergy cast about for allies to defend
Christ Jesus in the stricken world of hapless Christendom. 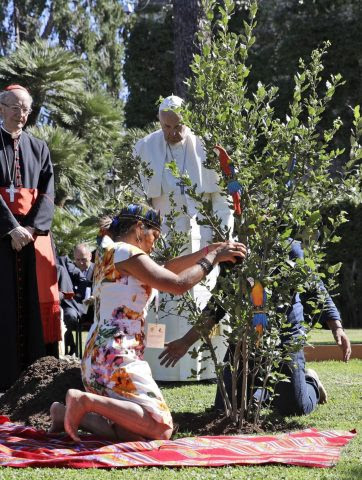 Jungle drums throb, in the Amazon hills half heard,
And from the land of Austria, a young man’s heart is stirred,
In the spirit of another who answering God’s call
Helped save the West from gruesome death and Islam’s cruel thrall!
Like Don John before him, Alexander takes the sword,
The sword of truth that cuts the bonds of Satan’s evil cords.
He kneels before the King of Kings and pledges to His word.
Zeal for God’s house consumes him as he ponders what he’s heard.
The priest said, “No, you may not throw the idols in the sea;
In fact, you must, since priests cannot defy the papacy.”
So Alexander, like Don John, takes weapons for the fight,
The rosary of Our Lady who puts devils to the flight.
In that enormous silence, tiny and unafraid,
Outside the Church of Mary wait the knights of the Crusade.
There is no noise of groans or guns booming from afar.
The Church is mostly empty when Alexander goes to war.


He takes the idols from their perch, all that he can hold,
And marches to the Tiber in a spirit calm and bold.
There are no banners on the bridge to mark the fateful day
There are no crowds, no kettle drums, no trumpet sounds the fray.
No torchlight crimson breaks the gloom, black-purple’s early light.
No cannon sends the Pachamamas on their morning flight.
Just a swat and then a splash, they quietly float away.
The faithful breathe a prayer of thanks to see the truth hold sway.
Where is the brave soldier who like Don John went to war?
Who tossed the ugly idols from the Roman Catholic shore?
Soon the faithful learn when his name spreads far and wide.
Alexander Tschugguel, the brave Maccabee, refuses now to hide.

The pope within his chapel, appalled at what occurred,
Hurriedly alerts the press with apologetic word.
His German allies squeal with rage and snarl with gnashing teeth,
“Carabinieri, do your duty. You must find the thief!”
The miscreants who stole the idols are condemned,
They must be apprehended, punished, cursed, and then;
The Pachamamas must be rescued from the sea,
Restored to their most privileged place before the Deity
So worshipers can once again insult our Holy God
By turning from the house of gold to venerate the sod.
The faithful meanwhile raise a cheer and happily they tell,
"We know the knight, our own Don John, Alexander Tschugguel."

And in the city of the pope, the ridicule is heard.
When one hears “Splash!” the laughter starts at that amusing word.
To tell the worldly pagans, the evil Synod was absurd.
And then the final Mass takes place, the idols are not seen.
But wait...a bowl of Mother Earth with plants both red and green,
A symbol of the Pachamama in liturgical affront
Is placed upon the altar, a Pachamama gotcha stunt.
We are not fooled, Pope Francis, by your one-world-religion goals
We will not let the barque of Peter crash upon the shoals.
We keep the faith, defend the Church, as we have done before.
And we have a new young, brave Don John, leading us to war!
Posted by Mary Ann Kreitzer at 6:00 AM

I'm going to be smiling for the rest of the day and all day tomorow and probably the next.

Thank you for this tale of inspiration. Your time was well spent.

Mary Ann, you are totally AMAZING! This should be published in THE WANDERER!

You are all so kind. Thanks! I love Chesterton and Alexander from Austria just seemed he perfect model in the spirit of Don John who a few years after Lepanto died a very holy and pious death. I'm sure the Blessed Mother embraced him as her Son said, "Well done, good and faithful servant. You were a real soldier of Christ!"

My goodness, that's fantastic. You really captured it.
I don't think we will forget seeing those Pachamama triplets tucked neatly onto his shirt, and that whack, was so gratifying it felt like we were doing it. We actually laughed to see them hit the water. I haven't felt so good since Laurence England's last video or the beautiful Rome posters went up. This is war.
Seriously, thank you for this.

This poem is perfect. Venerate the sod, haha. I did read it out loud. Thank you for this!

Thank you for the poem, it was great, and thanks for suggesting it be read out loud. I did that and enjoyed it even more.

Mary Ann, you are amazing!

Bravo!! I, too, read this aloud as it must be done! Well said! Thank you for this inspiration for today!! God love you!

Bravo!! Read this epic poem aloud! "Best read aloud, and to others!"