I have a large library of Catholic books. Some of them are terrible! In fact, I have an entire shelf of books for research with a note on the inside covers saying, "Beware, this book is filled with heresy." I also have many post Vatican II books that, while free of heresy, are filled with...mmm...how shall I put this? Nonsense? Or a little less polite...bull manure!

Recently I picked up a book called The New Question Box: Catholic Life in the 80s by Fr. John J. Dietzen, a priest from Peoria (RIP) who wrote a regular column that appeared in many diocesan newspapers and was distributed by Catholic News Service for about 35 years. He died in 2011. After browsing the book I'm less than impressed. No wonder so many post Vatican II Catholics are so ill informed.

Interestingly enough I opened Fr. Dietzen's book at random and ended up in a question on Communion in the hand. It was in a chapter on The Eucharist and I found many of his answers flip and dismissive of the person asking the question. I also wondered whether much of what he wrote about the practices in the early Church were even accurate. They reflect all the propaganda after Vatican II claiming that the new Mass was returning to the practices in the early Church. Really?

I'm reading Peter Kwasniewski's book, The Holy Bread of Eternal Life: Restoring Eucharistic Reverence in an Age of Impiety. The section I read this morning (coincidentally or Providentially?) was on Communion in the hand. Professor Kwasniewski would surely take issue with Fr. Dietzen. Let's have a debate between the two:

Fr. Dietzen: Within the past few centuries, in an effort to counteract certain heresies which denied the real presence of Jesus in the Eucharist the Church gradually built up the detailed prohibitions we learned about not touching the Host. When I was small (in the 1930s), we were taught that it was seriously sinful to touch not only the Host itself, but even the chalice, paten, or ciborium in which the Host and consecrated wine were contained

We now know, however, that such prohibitions did not reflect (as we then assumed) what the church had "always" done, and that they involved nothing essential to Catholic doctrine or practice....Frankly it seems to me that the hand is no less holy than the tongue. The incredible fact is that Jesus gives us his body and blood as our spiritual food and drink in the first place. From that viewpoint, at least, to make a big deal out of which part of our body touches the Host first appears to me to be supremely ridiculous.

That, of course, is the perspective of a Vatican II priest who, in answering a question about how Communion in the hand happened in the United States, omits a very relevant fact.  Dissenting, modernist bishops who wanted Communion in the hand, encouraged the faithful to be disobedient. Then they petitioned Rome for the exception to Communion on the tongue using the flock's disobedience to justify the change. Are we surprised? That's what liberals do! Manipulate and lie either directly or by omission.

Dr. Kwasniewski: We already have evidence of Communion placed into the mouth from the first millennium. Msgr. Nicola Bux argues there are even indications of it at the Last Supper. The early Christians did not practice Communion in the hand in the way we do it. Our way is novel and desacralizing. The custom of receiving directly into the mouth, observed for well over one thousand years by all Eastern and Western Christians...[has to do] with humble and adoring reverence toward the Body of Christ, and due respect for the anointed hands of the priest who handles the Body of Christ as his proper office.

In a previous chapter, Kwasniewski gives numerous reasons why we should receive kneeling and on the tongue. I'll list a few:

1. "...the intimate connection between kneeling and humility (St. Thomas Aquinas)...Kneeling is a vivid and heartfelt expression of worship, of the adoration that is due to our Lord and God."

2. In 1969, the congregation fors Divine Worship along with the majority of the world's bishops endorsed the practice of Communion on the tongue. "In view of the state of the Church as a whole today, this manner of distributing Holy Communion[viz., on the tongue] must be retained, not only because it rests upon a tradition of many centuries, but especially because it is a sign of the reverence of the faithful toward the Eucharist.....This reverence is a sign of Holy Communion not in 'common bread and drink' but in the Body and Blood of the Lord. In addition, this manner of communicating...gives more effective assurance that Holy Communion will be distributed with the appropriate reverence, decorum, and dignity; that any danger of profaning the Eucharistic species...will be avoided; and finally that the diligent care which the Church has always commended for the very fragments of the consecrated bread will be maintained."

3. Communion on the tongue is a vivid sign that we are being fed by Christ! The priest, in persona Christi brings Communion down from heaven (most perfectly illustrated when the communicant kneels) to feed the hungry soul. This important liturgical reality, Christ presenting Himself in the Eucharist to the humble soul kneeling before Him, is completely lost in the novel practice of standing and taking Communion in the hand.

4. "Moreover, the hand symbolizes work ('work of human hands'), while the mouth symbolizes speech, thought, judgment, and love....Scripture sees the mouth as closer to the core of the person, more expressive of who and what he is." Kwasniewski also points to the traditional rite of Baptism when a pinch of salt, a sign of purification, was placed on the child's tongue prefiguring his reception of the Eucharist. "Taste and see the goodness of the Lord." [For a comparison of the old and new sacramental rites see Daniel Graham's book, Lex Orandi: A Comparison of the Traditional and Novus Ordo Rites of the Seven Sacraments.]

What the communicant who receives standing and in the hand may not realize is that he/she is presenting an image that says, "I have my big boy/girl pants on and I can do it myself. I'm equal to the Lord; I don't kneel before anyone. As for having someone feed me, I'm no helpless baby!" I'm sure many receive in the hand with a spirit of humility. I know some very pious people who do, but the fact is that their actions conform to those of the modernists who don't care what their motivation is. 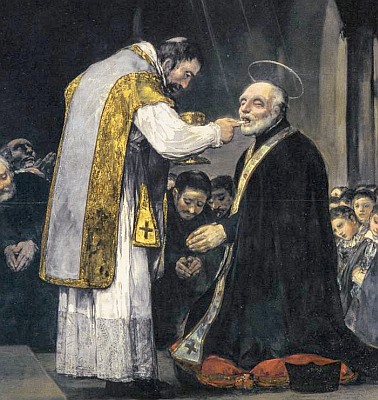 Of course, before God we are all less than helpless babies, but to acknowledge it requires true humility and recognition of our own littleness. That's what Communion kneeling and on the tongue reminds us of every time we receive in that profoundly humble way.

I haven't decided to drop Fr. Dietzen's book in the recycle bin yet, but I'm close. Who has time for such nonsense when there are so many good books to read like Peter Kwasniewski's and Dan Graham's.

Our Lady, Seat of Wisdom, pray for us.

I confess I am a book burner. A late comer to the faith, I absorbed some good, some indifferent and some bad books. Rather than donate the bad, and perhaps even the indifferent ones, bad books go into the trash---so no ones' minds will be poisoned by heresy!

We were so blessed to know a couple who traveled across the country and rescued the books that were being thrown into dumpsters sitting outside Catholic seminaries, nursing schools, convents,colleges, high schools and any other Catholic place where there was a library. These precious people then had book sales at St. Marys Oratory in Wausau, WI so we who wanted real Catholic reading could find not just the truth but that truth told in the respectful and humble ways of the people from before Vatican II. I have been more than dismayed to find a huge number of Catholics thinking that certain writings such as the Lord of the Rings are Catholic, when they are occult and gnostic. Using writings like those to teach morality is not only a waste of time but I believe offensive to God. One does have to take care with what one admits into the mind.