Was Jesus a Drug Addict who Threatened a Pregnant Woman by Aiming a Gun at her Baby in the Womb?

This blasphemous painting is hanging in two places on the Catholic University campus. (One got stolen, but was quickly replaced to the shame of the university.) I hope students are throwing holy water on them and demanding their removal like the undergrad in the article linked at the end of this post. Watch the video! 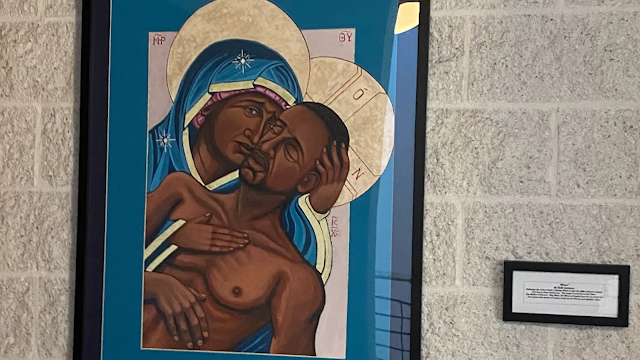 I have no problem with  depicting Jesus or Mary with sinners. A painting of Jesus with His hand on the head of George Floyd or addressing a crowd about to throw stones at him would be poignant and remind us that every single one of us is a sinner. "Let he who is without sin cast the first stone."

A painting of Mary with George Floyd wrapped in the folds of her mantle would remind us that she is not only Theotokos, Mother of God, but the refuge of all sinners. "Am I not here, I who am your Mother?"

But to depict George Floyd as Christ with a halo seen in many of the Christ icons is blasphemous. George Floyd was a drug addict and a man who aimed a gun at a pregnant woman's belly targeting the baby in her womb. He had a fatal level of fentanyl in his system when he died according to the coroner's report. Is this the man to portray Jesus Christ, the God-Man?

The students protesting this blasphemy at Catholic University are right. The school is trying to distance itself from the reality of what it portrays. But it's clear that the artist meant the Christ figure to look like George Floyd from his cropped haircut to his facial hair. For more, see the article below and the articulate undergraduate Junior discussing the blasphemous painting. How can God bless us when Jesus is treated this way? The same for Catholic joke memes that make him a joke. I recently saw a cartoon that showed him kicking over the tables in the temple over a Monopoly game. My colleague at RestoreDCCatholicism has addressed this and she is absolutely right. Our faith is not a joke.
Poke fun at yourself, not Jesus and Mary and the saints. Philip Neri loved a good joke, but I can't imagine him ever, ever treating Jesus Christ with casual ridicule which it is. Ridicule Jesus? Make light of His actions in the Gospel? No! Nein! Non! Nada! never!
Catholic University painting depicting George Floyd as Jesus is 'heretical, blasphemous,' student says
Posted by Mary Ann Kreitzer at 7:44 AM

I'm torn on this. Over a number of years of petitions and protests, it does not seem to me that these work especially well against Leftists, who probably enjoy the fruit of their blasphemy, when we get upset. In fact, it may be that the more response it gets, the more frequent and dug in the blasphemies will get. The reaction to us is a feature, not a bug.
These are evil times. I have a definite feeling more response is going to equal more outrages. We should have turned the world upside down with "Piss Christ". That kind of art is just hacky now, not even considered edgy anymore, I don't think. I could be wrong.
I do not know if the artist intended this to be a George Floyd representation. If so, it does not look much like George Floyd, just like a black man. I would never have seen Floyd in this image. If the artist said that's the interpretation, then it is, but I wouldn't have seen it without the kerfuffle. Christians of this day will never equal other religions who nobody would mess with, when there is something to protest. To defend Christ, however, is an honor, and a good thing. I'm just not sure it works as we might wish. I would love to see overwhelming protests when God is insulted, don't get me wrong, and I applaud the students for caring. It would be excellent if the powers that be learn not to mess with Christian images out of concern for outraged Christians. That would be a good thing. Right now we're a lot like Rodney Dangerfield, we get no respect.

George Floyd was a junkie who died from a drug overdose. Period. His autopsy revealed his body was filled with a cocktail mixture of deadly doses of multiple drugs. His actions that led to police use of restraining force were caused by drugs. His fatal cardiovascular crisis was caused by those same drugs - at levels far beyond what any human being could survive.

To put Floyd on the wall of our flagship Catholic University, campus of the Basillica of the Shrine of the Immaculate Conception, one of the greatest such Basillicas in the world, and imply that Floyd is the face of Jesus is blatant and gross sacrelige.

Jesus came to save us from our sins ... not to confirm us in our sins. The greatest mercy is to confess our sins, to be forgiven our sins, and to be cleansed from all iniquity. (I John 1:9)

Nowhere did anyone from Catholic University attempt to convert George Floyd or proclaim the necessity to convert from death to life as a prerequisite for union with God. That is the Gospel. As a bare minimum, the embrace of our Blessed Mother depends upon Gospel conversion. The Holy Face of Jesus is Divine righteousness. She, like Her Son from whom flows all Grace, cannot co-exist with sin and certainly does not embrace it. The power of God is to destroy the works of the devil, sin and the power of sin that enslaves the lost, like George Floyd, who do not hear from anyone, especially the RCC, the Gospel story of conversion.

Get this blasphemous picture off the wall, and start the long process of personal penance and conversion - first within the Church, then without.

According to Restore DC Catholicism there were student complaints and the image was stolen (like the Pachamamas in the Tiber)...and another smaller one put in its place.
https://www.pillarcatholic.com/p/after-painting-stolen-cua-law-dean

When the annual collection for Catholic U is taken up I always ignore it.