Joke of the day? The only media you can trust is Church Militant! Hahahahahaha!

Michael Voris is at it again -- reporting from Baltimore about the massive crowd (Really...1500?) coming to his rally tomorrow. As usual Voris preens and postures as he promotes Church Militant (CM) as the only courageous team willing to take on the evil bishops, every one of whom should immediately resign. (Yes, he said that in another Vortex episode since the bishops are all homosexuals, homosexual enablers, or cowards, not to mention "Johns" paying their whores in the media to pick on poor CM. Yup, he called and/or implied that the bishops as a group are cruising "Johns" looking for their latest hooker pickup. (Obviously Voris knows a lot about cruising for pickups. As my mom always said, "People in glass houses shouldn't throw stones.")

Archbishop Chaput gets the guillotine treatment in this latest rant along with The Pillar (a news outlet with which I'm not familiar) and J.D. Flynn, editor of The Pillar, whom Voris describes as "Chaput's puppet — a poor canonist who never excelled in his chosen field who was... plucked out of mediocrity by Chaput (whom he worked for in Denver) and made head of Catholic News Agency after never having had one day of experience in journalism."

Well, really, you can't blame Michael, the media mogul. After all, he received four (count 'em -- FOUR!) regional Emmies for his local news show with a FOX affiliate in Detroit before he founded St. Michael's Media. He, we need to realize, is a professional muckraker journalist, unlike all those other ones including Michael Matt of The Remnant and John-Henry Weston of Life Site News who are beneath contempt.

Is Michael Voris really telling the truth about all the Catholic media. Are they all under the thumb of the bishops and being paid off? Raymond Arroyo at EWTN and his papal posse routinely address some of the most grievous problems in Holy Mother Church. But they do it with respect and intelligent commentary unlike the shrill rants and vicious backbiting so characteristic of CM.

I have to hold my nose these days every time I visit the CM website.  It wasn't always like that. I was an early supporter and attended the rally several years ago (2018). Even then I was concerned about the direction they seemed to be taking. I reached the "no more" stage over their vicious attack on the SSPX and traditionalists in general.

No more. These folks are totally off the rails. They practice the same immoral tactics as Communist Saul Alinsky against their enemies (which include just about everybody...except Opus Dei!): 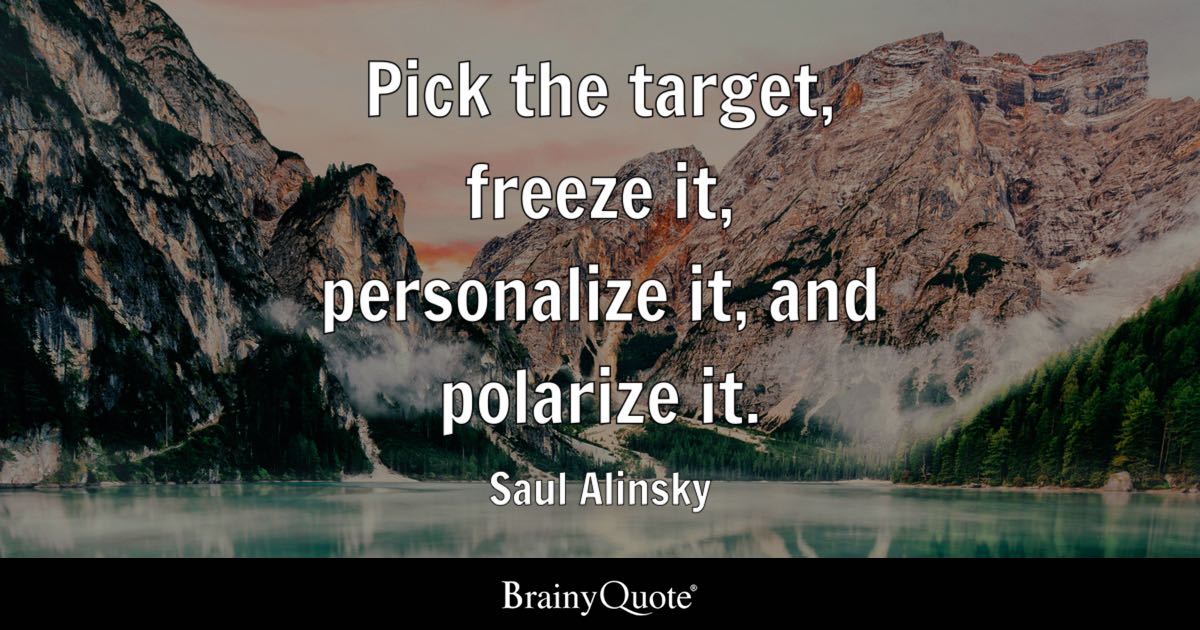 CM machine guns lots of targets with their verbal vollies: all the bishops (who should all resign); all of the Catholic media (except them, of course, if you can call them Catholic); all of the laity who attend SSPX chapels or don't, but defend the right of the SSPX to exist; all those supporting the constitutional rights of accused clergy to a presumption of innocence and a fair trial judged by a jury of their peers); all those who dare to criticize their policy of guilt by association, innuendo, distortion, twisted narratives, etc., etc. ad nauseum.
It's high time Voris and company were called out. I for one am sick of their ungodly rage, their hypocrisy, their lies, and their thug tactics.

As Restoring the Faith's host, Mike, the Marine, Parrott recently pointed out that CM is in a "ruthless crusade against the truth." Watch the video below to get a birds eye view of their tactics, not to mention their hypocrisy. They are, indeed, the "fake news media" with a veneer of Catholicism. Of course, since they make all the rules they give themselves permission to violate the 5th and 8th commandments on a daily basis.

As I blogged Friday, CM sets themselves up as judge, prosecutor, and jury for anyone they presume is guilty -- even before the plea is entered and the evidence is presented. These people are thugs! If you still support them, know that you are supporting what is evil and corrupt and damaging to Holy Mother Church. They aren't interested in the true, the good, and the beautiful. They are interested in garnering clicks and comments by focusing on the lie, the evil, and the ugly. It's as simple as that.

An investigative reporter could end CM with a little research into Voris and Co.

Thank you for commenting, Angela. I went to your profile and saw you are an opera singer. So I searched out some of your recordings on You Tube. Beautiful! With Christmas coming I'll plan to post some of them with your permission.

In America, there is no such thing as "a jury of one's peers." Or, rather, since in America there are no aristocrats, everyone is everyone else's peer.

The phrase simply does not exist in American law.

Everyone who went to Baltimore today for Voris’ little protest was used by Voris and company to (try and) legitimize their tabloid trash media empire. I have two observations about Voris and Niles’ jihad against Mike at Restoring the Faith:

1. Mike is (legally) raising funds to assist a priest who says The (traditional Latin) Mass. Theres nothing illegal about what Mike is doing so why is Voris trying to block it? Ponder that while I present point no. 2…

2. Restoring the Faith has grown tremendously in a short period of time to be a very popular Catholic media channel. Thousands of people tune in weekly for their Friday broadcasts. RTF is now competition for CM and unlike CM, RTF is a not-for-profit channel that doesn’t donations from viewers or funding from shadowy secret societies.

CM despises The Mass, the priests who say The Mass and the laity who assist at The Mass. We’re all familiar with their jihad against the SSPX but it’s not just the Society CM has a problem with. Not long ago, Voris ranted in a Tweet that The Mass was an “idol”, insulting every single person who attends The Mass and every priest who says The Mass. More recently, additional Tweets by Niles proactively convicted Fr. Jackson before the justice system had a chance to start. Should Fr. Jackson be found innocent, CM will instantly have mud on their faces. That will hurt their bu$ine$$ so like Alinsky trained leftists, they must control the narrative via ruthless intimidation. Then there’s the repulsive narcissism of Voris and Niles which is a red flag for a lack of humility. They can’t be dethroned by RTF, Les Femmes or anyone else they deem as a threat. So, once again, just like Alinskiites, they have to (try and) destroy.

Voris and Niles’ trashy media empire is helping The Church about as much as the Freemasons are.

You've had the same thought I've had about attacking the competition. I totally agree with your last point. They are USING the faith, or should I say ABUSING the faith. What's sad is to see so many good folks enabling them like Michael Hichborn and George Nemayr. I hated seeing them on the list of speakers today. They help to give CM a credibility they don't deserve.

You mentioned you are not familiar with The Pillar. It was they who exposed the powerful Grindr priest, top non-episcopal person in the USCCB, who used it on an almost daily basis and discovered that people in the Vatican were also using Grindr, a homosexual pickup social media site.

No wonder CM attacked them. They scooped them. Most of their coverage is hashed over material from other people. My blog partner, Susan was looking into McCarrick's missing year ages ago.

Restoring the Faith has grown tremendously in a short period of time to be a very popular Catholic media channel.

Therein, arguably at least, lies the explanation for the shocking blackmailing of Mike Parrott.

For any Catholic to see another lay person or group as "competition" is bad enough, but to seek to destroy that person/group is unconscionable.

CM will not end well.