Here we go again. Christine Niles has another cause celebre to
engage her crackerjack investigative skills: the accusations against Fr. James Jackson, FSSP of possessing and distributing child pornography. If he is, indeed, guilty he needs to be brought to justice.
But wait a minute. He hasn't even entered a plea yet. That's scheduled for November 15th. Can we hold off on the guilty verdict for five minutes, Christine?
The lady is already tweeting and attacking anyone defending the priest. She's playing the role of the Queen of Hearts in Alice and Wonderland: "Sentence first; verdict afterward." Nothing new there.
I've spent my entire adult life fighting for children. I want to see anyone who hurts a child born or unborn in jail, but I don't think raising the blade on the guillotine before a person has even entered a plea is the right way to go about it.
Catholic Family News Editor, Matt Gaspers, responded to Niles' leap to judgment about Fr. Jackson with his own tweet:

Regardless of whether Fr. Jackson is innocent or guilty (something which has not yet been legally established/declared), this kind of general suspicion against devoted priests who happen to be "beloved" and "trad" is truly reprehensible. #KyrieEleison 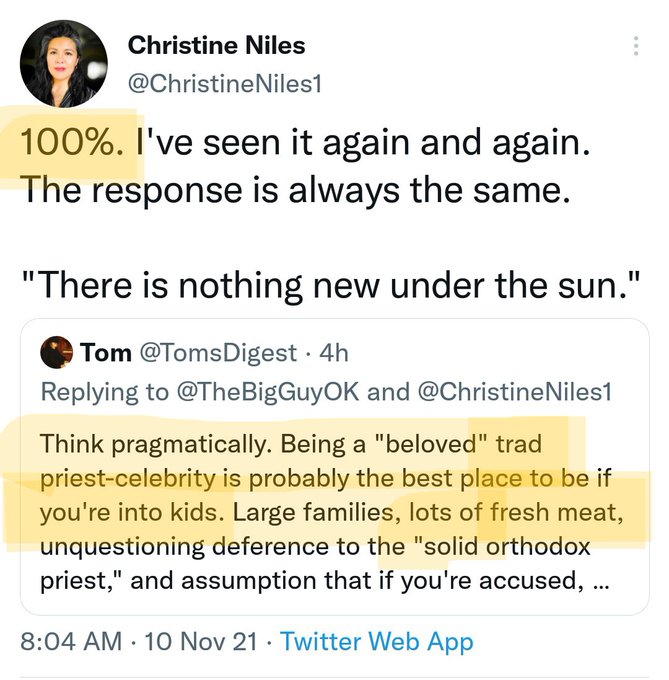 Church Militant (CM) absolutely hates traditionalists. That is no exaggeration. Note their language when they speak of those who embrace the Mass of the millennia: trads, rad trads, pedo-enablers, cult members, etc. There isn't an iota of objectivity in Christine Niles' or CM's philosophy when it comes to the SSPX and now a priest of the FSSP. Traditionalists are the enemy and they are always guilty as charged as well as all their innocent associates.
I don't have the foggiest notion whether Fr. James Jackson is guilty of child porn or not. He's been arrested and the legal system is collecting evidence. He'll face that evidence in court and have an opportunity to put up a defense. Then a jury will decide.
What I do know, however, is that everyone has a right to the presumption of innocence until they are tried and a jury brings in a verdict. They shouldn't be tried by salivating reporters like Christine Niles who gives every indication of rejoicing when another one of those evil traditional priests is accused.
It appears that to Niles and Church Militant, an accusation is as good as a judgment
(and great click bait).
Christine Niles has a vendetta against the SSPX which she manifests every time she opens her mouth on the subject. She masquerades as an investigative reporter but is willing to twist evidence to support her pre-conceived notions. She's been caught in the act of distorting the evidence as my colleague, Susan Matthiesen, pointed out in a recent article.
Niles claimed Fr. Jurgen Wegner, admitted that there were between 5 or two hundred cases of clergy abuse in Kansas. This became Niles cause celebre proving that Fr. Wegner knew about all those evil pedophiles in the SSPX.
One big problem. She took his quote out of context. He was talking about all the abuse cases against priests in Kansas, not just the SSPX. There are FOUR Catholic dioceses in the state: Wichita, Kansas City, Salina, and Dodge City. Niles twisted Fr. Wegner's statement to mean only the SSPX cases in the state. And then she proceeded to create a horror film casting Fr. Wegner as Dracula.
Give the woman an academy award! She has the creepy music and visuals of poor sad girls down pat. She knows how to manipulate the audience who illustrate their objectivity in often vile comments leaping to the same guilty verdict that Christine wants. Hey, any devout, traditional priest must be guilty. (It's so much fun to have a fan club cheering from the sidelines!)
Niles' brand of "investigative journalism" is scurrilous. Her use of loaded language, non-credible (even psychologically damaged) witnesses is abusive to both them and the truth. Her behavior is not the M.O. of an "investigative reporter." She's the journalistic equivalent of the quack selling Dr. Niles' snake oil.
Niles already has Fr. Jackson in the dock, found him guilty, and is going after anyone defending him with a vengeance. I'm not among his defenders. I haven't contributed to the fundraiser. Maybe he'll end up with a guilty verdict and go to jail. If he's guilty that's where he belongs. (If you want to read an objective, fair article about Fr. Jackson check out Catholic News Agency.) Note that the porn images are all recent, from October and November. Did a 66-year-old priest really suddenly just begin to get into porn in the past two months? Does the prosecution have more? As one source said, it's incredibly easy to hack into computers these days.
The most charitable approach at present is to consider Fr. Jackson innocent until proven guilty or until he pleads guilty. Is it reasonable, as Gaspers says, to harbor a "general suspicion" against devoted priests, most of whom are guilty of nothing but trying to sanctify their flocks? Or is using that very devotion and traditionalism as proof that they must be guilty "reprehensible?"
"Reprehensible!" I think that's a good adjective to describe Christine Niles' approach, not to mention CM in general. Calling all the bishops Johns who are paying their whores, like Mike Voris did recently over the legal situation regarding the Baltimore rally, is exactly why I no longer support Church Militant and encourage people to give them a wide berth. They are disrespectful and crude. They can't be trusted not to lie; they don't mind twisting the truth. And their absolute disrespect for every bishop in the U.S. as well as anyone who disagrees with their agenda is pathetic.
Besides, if people will lie about small things; they'll lie about big things.
And that's why I'm not going to Baltimore.
I've been outside the bishops' meetings many times -- long before CM was even on anyone's radar screen. CM is the new kid on the block and, sad to say, the kid is a bully. I don't pal around with bullies.
I'd like to be in Baltimore praying the rosary. But I'm not helping to swell CM's crowd this year. I find them reprehensible! And for them to call their rally a "prayer vigil" is a desecration of the term.
So I'll hold my own prayer rally before the Blessed Sacrament here in Woodstock praying for the bishops and for all who use the truth to fight the evil in the Church. Does that include CM? Mmmmm.... you decide. You can read all our blog posts about CM and their attack on the SSPX and others here.
Posted by Mary Ann Kreitzer at 5:30 AM

Being a member of an FSSP parish, I certainly hope this is not true. After the attacks on the SSPX, I don't trust that rabid Niles and Voris team on anything, but I will wait until I know more. I've been fooled before.

Who is the Priest for Church Militant?

The police are investigating and usually they have pretty good 'computer crime' people. There may be a LOT more to that computer's story than we know now.

I appears from news reports that the activity was traced to a computer in the rectory and Father Jackson said it was his computer. That supposedly gave them probable cause for an arrest.. No investigation was done to determine if it was Father Jackson who downloaded the files. Never talk to the police.

Nicely put. I agree on every point. CM has a bad habit of sensationalizing as much as they can. Fr. J might be guilty, but I doubt it. In any case their coverage has not been very balanced or impartial.

She is always running around with her hair on fire when it comes to The SSPX but as for the public school teachers who commit sexual crimes against minors at a far higher rate? I can't remember reading her writing abut that.

Such praxis reveals a lot about who she is and what she opposes.

There is an interesting connection between CM and the diocese of Tyler TX. I admire some of Bishop Strickland's statements but I find his work with CM in trying to start a 'catholic community' in Winona, TX, questionable. One can make an online search for the CM Retreat in the Desert from March of 2021. If you look at the program, it looked less like a retreat; mor like a Voris sales pitch for people to buy property at the site. it really brings up a lot of questions. I have met people at the local FSSP chapel here in East TX who are looking into buying property there. They might be surprised that it is not traditional. And I think that is why Voris & Niles have this vendetta against all traditional priests. If they can discredit them enough, it might improve CM's chances of this conservative housing development bringing in some dollars.
BTW, there will be a TV station in the new town.

What a marvellous post. I've just found your list of articles on CM vs SSPX and I am looking forward to reading most (if not all) of them as soon as possible.

I know from personal experience that you are being objectively fair in this matter (as I'm sure you are in all matters) because when I had the pleasure of visiting you in the USA some years ago, as a new SSPX Mass attendee myself, you were less sure about them. I am always edified by honest appraisal of the facts and a desire to reach the truth - having been there, done that, bought the T shirt myself! Those of us who have come to see that the SSPX, while less than perfect, is not the schismatic bogey-man depicted by Church Militant, fully appreciate your informative material on this subject. In short... Thank you!