The following article is by Christine Williams from Jihad Watch.  I bolded the most important phrases which is all one needs to read to understand what's coming down the road for Europe. Highlighted in red is the statement that Islam is not in the business of peaceful coexistence. While reading, remember that Erdogan wants Turkey to join the European Union.

'Erdogan is still in a rage over “the cancellation of his supporters’ rallies across Europe.” He will never permit challenges to his own authority in his own country, but of course he has no respect for Europe. For than matter, Europe has no respect for itself, and apparently no interest in defending its own culture and protecting its own people.
Turkey’s foreign minister Mevlut Cavusoglu has also declared that “holy wars will soon begin” in Europe, in spite of the defeat Geert Wilders in the Netherlands. This menacing declaration should come as no surprise. Turkey’s Islamization has been accelerating at an alarming rate at every level, from the leadership to the citizenry.
Europe, on the other hand, has passively welcomed jihad by immigration (hijrah) into its countries, all in the name of diversity and multiculturalism. The more “welcoming” the West is, the more emboldened Islamic supremacists and jihadists become. Their goal is the conquest of the House of War, not peaceful coexistence. Europeans are to blame for the brazenness of Turkey’s supremacist leaders. Recep Tayyip Erdogan has accused Europe of staring a “clash” between Christianity and Islam with a ruling allowing employers to ban headscarves as part of wider restrictions on religious and political symbols.
Speaking hours after his foreign minister warned that “holy wars will soon begin”, the Turkish President launched a fresh attack amid an ongoing row over the cancellation of his supporters’ rallies across Europe.
He said the European Court of Justice ruling that upheld the dismissal of two Muslim women who refused to remove their hijabs started a “clash between crescent and cross” in terminology alluding to the Crusades. 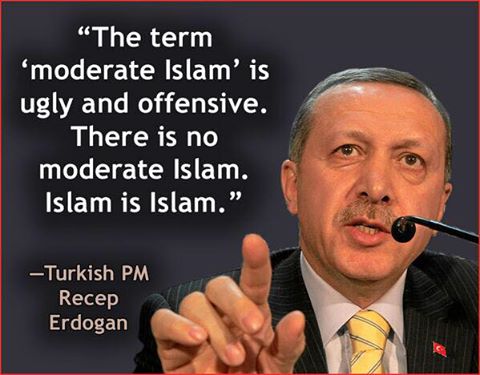 “Shame on the EU. Down with your European principles, values and justice,” Mr Erdogan told supporters in Sakarya. “They started a clash between the cross and the crescent, there is no other explanation.”
In a combative speech, Mr Erdogan hit out at European leaders in the Netherlands and Germany after Turkish ministers were prevented from holding events designed to drum up support ahead of a constitutional referendum.
The Turkish President said the Dutch Prime Minister Mark Rutte, who the beat far-right leader Geert Wilders in Wednesday’s general election, had lost Ankara’s friendship by banning Turkish political campaigning in the country.
The dispute has intensified since a rally to be held by the Turkish foreign minister Mevlut Cavusoglu in Rotterdam was cancelled on Saturday.
The Dutch authorities withdrew permission for the foreign minister’s plane to land when he vowed to visit the country regardless, sparking a series of tit-for-tat sanctions.
Mr Erdogan and prominent ministers have called the Dutch government “fascists” and “Nazis”, while EU leaders have called the allegations offensive and “detached from reality”.
The dispute has sparked protests in Turkey and across Europe. A protester scaled the Dutch consulate in Istanbul and replaced the national flag with the Turkish banner during demonstrations on Sunday, while Turkish protesters have been photographed stabbing oranges and holding signs reading “fascist Holland”.
Ankara also halted high-level talks with Dutch government officials on Monday and closed its airspace to the country’s diplomats, while repeating threats to scrap a deal struck with the EU last year to slow the flow of refugees to Greece.
Allies of the Turkish President are targeting more than a million Turkish voters living in Europe who will be eligible to cast a ballot in the vote on 16 April.
The referendum could see Turkey’s parliamentary system replaced with an executive presidency using constitutional amendments that have alarmed human rights groups.'
(by Christine Williams, Jihad Watch)
Posted by Susan Matthiesen at 6:00 AM