A Modern Athanasius to Defend the Church against all Heresies

"A second Daniel, a Daniel [come to Judgment]!"
Gratiano, The Merchant of Venice 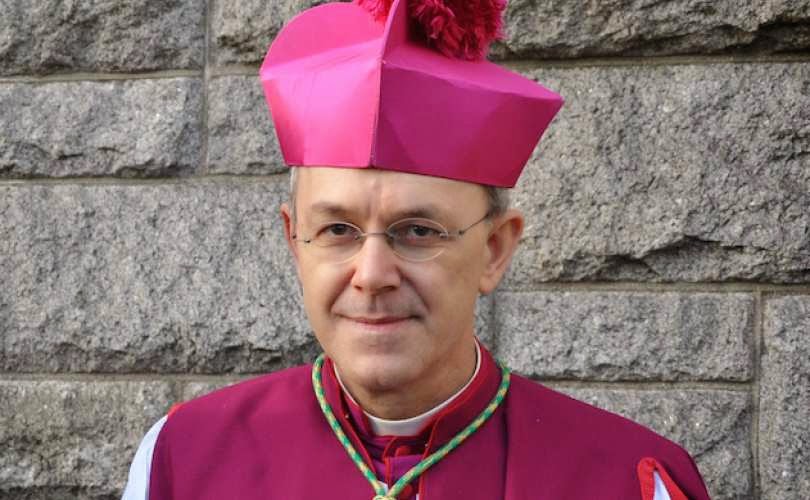 In an interview with Izabella Parowicz of Polonia Christiana Magazine, auxiliary bishop of the Archdiocese of Saint Mary in Astana, Kazakhstan, dropped this bombshell:

This is the first time in Church history that such a heterodox text was actually published as a document of an official meeting of Catholic bishops under the guidance of a pope, even though the text only had a preliminary character...this agenda reflects the corrupt and pagan main stream morality of our time, which is being imposed globally by means of political pressure and through the almost all-powerful official mass media, which are loyal to the principles of the world gender ideology party. Such a synod document, even if only preliminary, is a real shame and an indication to the extent the spirit of the anti-Christian world has already penetrated such important levels of the life of the Church. This document will remain for the future generations and for the historians a black mark which has stained the honour of the Apostolic See.

Wow! No equivocation there! And who's to blame?
The bishop didn't equivocate there either describing, "obvious manipulation on the part of some clerics who held key positions in the editorial and governing structure of the Synod." He went on to defend the indissolubility of marriage:


A person who still has the indissoluble sacramental marriage bond and who in spite of this lives in a stable marital cohabitation with another person, by Divine law cannot be admitted to Holy Communion. To do so would be a public statement by the Church nefariously legitimizing a denial of the indissolubility of the Christian marriage and at the same time repealing the sixth commandment of God: “Thou shalt not commit adultery”. No human institution not even the Pope or an Ecumenical Council has the authority and the competency to invalidate even in the slightest or indirect manner one of the ten Divine commandments or the Divine words of Christ: “What therefore God has joined together, let man not separate (Math 19:6)”.

The bishop condemned putting the issue to a vote by the Synod Fathers saying:

This fact is in itself grievous and represents an attitude of clerical arrogance towards the Divine truth of the Word of God. The attempt to put the Divine truth and the Divine Word to a vote is unworthy of those who as representatives of the Magisterium have to hand over zealously as good and faithful rules (cf. Math 24, 45) the Divine deposit.

As for those bishops who actually support, defend, and agitate to allow the divorced and remarried to receive Holy Communion, Bishop Schneider minced no words about their "infidelity:"


By admitting the “divorced and remarried” to Holy Communion those bishops establish a new tradition on their own volition and transgressing thereby the commandment of God, as Christ once rebuked the Pharisees and Scribes (cf. Math 15: 3)...such bishops try to legitimize their infidelity to Christ’s word by means of arguments such as “pastoral need”, “mercy”, “openness to the Holy Spirit”. Moreover they have no fear and no scruples to pervert in a Gnostic manner the real meaning of these words labeling at the same time those who oppose them and defend the immutable Divine commandment and the true non-human tradition as rigid, scrupulous or traditionalist.

He compared the situation to the Arian heresy:


During the great Arian crisis in the IV century the defenders of the Divinity of the Son of God were labeled “intransigent” and “traditionalist” as well. Saint Athanasius was even excommunicated by Pope Liberius and the Pope justified this with the argument that Athanasius was not in communion with the Oriental bishops who were mostly heretics or semi-heretics. Saint Basil the Great stated in that situation the following: “Only one sin is nowadays severely punished: the attentive observance of the traditions of our Fathers. For that reason the good ones are thrown out of their places and brought to the desert” (Ep. 243). (Or to Malta.)

The Bishop praised the final Relatio, calling it a "real Catholic document." Nevertheless, he decried that it included the controversial paragraphs and lamented its potential to confuse and mislead the faithful:

there remains nevertheless the worrying and astonishing fact that the absolute majority of the present bishops voted in favor of Holy Communion for the “divorced and remarried”, a sad reflection on the spiritual quality of the catholic episcopacy in our days. It is moreover sad, that this paragraph which hasn’t got the required approval of the qualitative majority, remains nevertheless in the final text of the Relatio and will be sent to all dioceses for further discussion. It will surely only increase the doctrinal confusion among the priests and the faithful, being in the air, that Divine commandments and Divine words of Christ and those of the apostle Paul are put at the disposal of human decision making groups. One Cardinal who openly and strongly supported the issue of Holy Communion for “divorced and remarried” and even the shameful statements on homosexual “couples” in the preliminary Relatio, was dissatisfied with the final Relatio, and declared impudently: “The glass is half-full”, and analogously he said that one has to work that next year at the Synod it will be full. We must believe firmly that God will dissipate the plans of dishonesty, infidelity and betrayal. Christ holds infallibly the rudder of the boat of His Church in midst of such a big storm. We believe and trust in the very ruler of the Church, in Our Lord Jesus Christ, who is the truth.

Betrayal is not too strong a word for what happened at the Extraordinary Synod with the apparent approval of the Holy Father. I urge you to read the entire interview. Jesus said we would know someone by his fruits. This bishop is obviously one of those who can be trusted to lead his flock in fidelity. Thank God for him and those brother bishops in union with him. Their voices will be ignored by the mainstream media, but faithful Catholics should spread them far and wise!