Mourning at Mass this Morning 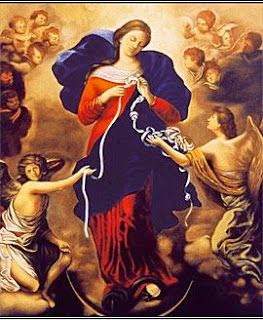 I don't know why it overcame me this morning at Mass, but as I stood for the Our Father and sign of peace, I started thinking about the excommunication of the SSPX in Italy and all the faithful who attend their services. I have friends who go to an SSPX parish here in Annandale so the excommunication felt personal even though it doesn't affect them.

What also grieved my heart was the realization of the double standard, the almost total lack of discipline for the heretics who peddle the murder of the unborn and the destruction of the family and publicly agitate for women's ordination and normalization of fornication and serial marriage.  The list goes on and on.

None of the nuns on the bus or the priests running gay parishes have been disciplined. Clergy and laity who promote contraception and abortion and gay relationships for the most part go on their merry way undisturbed by the local bishop. I think Bishop Bruskewitz was the only one EVER to excommunicate the radical dissenters of Call to Action which he did along with a long list of Masonic organizations and the SSPX.

But in most dioceses the big guns, at least in terms of antagonism and hostility, are reserved for traditionalists, the disciples of Archbishop Lefebvre who founded the SSPX in his deep concern over what he saw as efforts to de-Christianize the Church. But even those who simply want to attend the traditional Latin Mass without affiliating with the SSPX are often treated with suspicion, as if they are clinging to a past that would be better dismissed and forgotten.

But was Archbishop Lefebvre right? Is the Church being de-Christianized? Wasn't that what happened at the recent Synod? How many bishops are verbally nailing their theses to the door of St. Peters claiming that there is no such thing as infallible, authoritative, unchanging doctrine? It seems to me that Cardinals Walter Kasper and Reinhard Marx of Germany and Austrian Cardinal Christoph Schönborn are the spiritual sons of Martin Luther.Marx has actually said that doctrine is not a "static construct."

But I'm getting off topic. This evening I read an article at Catholic Culture:


Episcopal action on the SSPX: A basic strategy for unity

It took me back to my morning grief, but it also confirmed what I was thinking about. And so I read it praying that Our Lady, Undoer of Knots, will channel God's graces of enlightenment on our poor, hapless Church so divided and suffering.

Our Lady, Undoer of Knots, pray for us.

One day, in Church time, a long time from now, Labevre will be raised to the Altar.

This is what I just don't understand. People who deny Christ, people who deny the Faith are welcome at the Vatican but the SSPX alone are held in contempt. If Tony Palmer is okay and a brother bishop, or if Archbishop Gregory and his welcoming of the pride marches to the cathedral are okay then who isn't? I've never been to an SSPX chapel and I don't know anyone personal who does but the whole thing seems off to me.

I was thinking this morning...who would I rather have for my bishop? Walter Kasper or Marcel Lefebvre? Hmmm....I'll have to think about that....for two seconds or less.