Yikes! Did You Know This is How Wheat is Harvested? 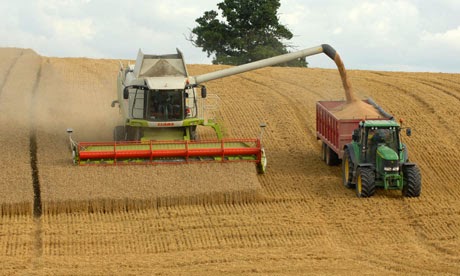 What you don't know about how most farmers harvest wheat:

Standard wheat harvest protocol in the United States is to drench the wheat fields with Roundup several days before the combine harvesters work through the fields as withered, dead wheat plants are less taxing on the farm equipment and allow for an earlier, easier and bigger harvest.

Yikes! From now on we're eating organic bread and I'm looking for a source of organic flour:

According to Dr. Stephanie Seneff of MIT who has studied the issue in depth and who I recently saw present on the subject at a nutritional Conference in Indianapolis, desiccating non-organic wheat crops with glyphosate just before harvest came into vogue late in the 1990′s with the result that most of the non-organic wheat in the United States is now contaminated with it. Seneff explains that when you expose wheat to a toxic chemical like glyphosate, it actually releases more seeds resulting in a slightly greater yield: “It ‘goes to seed’ as it dies. At its last gasp, it releases the seed.” According to the US Department of Agriculture, as of 2012, 99% of durum wheat, 97% of spring wheat, and 61% of winter wheat has been doused with Roundup as part of the harvesting process. This is an increase from 88% for durum wheat, 91% for spring wheat and 47% for winter wheat since 1998. Read the complete article here.

Is this good stewardship of the earth and a benefit to the common good? Where are the Catholic social justice advocates? Poisoning of the food supply impacts a lot more people than the nonsense and unscientific hysteria over global warming. (Oops...climate change. It's hard to promote global warming when the ice caps are growing and the climate is cooling.)
Posted by Mary Ann Kreitzer at 8:30 AM