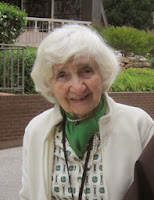 Alice von Hildebrand doesn't mention a word about Cardinal Raymond Burke in this touching article, but there is no doubt in my mind that her beloved friend is whom she had in mind. It was Alice von Hildebrand who requested a spiritual bouquet of masses to be said for the cardinal several months ago when the rumors about his demotion from the Apostolic Signatura began to fly. I also heard via friends how grieved she was by his demotion. But I didn't need to be told. I only had to read the words below:


Well known, alas, is the human temptation of making reproaches to God for “ill-treating his friends” – in contrast to Satan who favors his “children” in every possible way… until they die. Power, success, fame, riches: these are the gifts that the Evil one generously distributes to those who have sold their soul “for a mess of pottage.”

Not so for those whose heart has been wounded by the “man of sorrows”, acquainted with grief… who was despised and rejected. (Isaiah 53) Those who have heard God’s call and generously respond cannot and should not expect a better fate than the one of their Savior Himself.

The lover wants to share the sufferings of the loved one; he who loves Christ wants to follow Him all the way to Calvary for, on this earth, love cannot be separated from suffering. However, the gamut of possibilities is great indeed. For some, it is excruciating physical pains (which do not exclude spiritual sufferings); for others, it is persecution and martyrdom – something which they expect and even welcome. But the most baffling, and maybe the most dolorous form of grief, is to be abandoned and betrayed by those whose mission was to encourage, protect and shelter the faithful disciples of the Lord, those who selflessly work in the divine vineyard, and do so exclusively for God’s glory.

"To be abandoned and betrayed" represents the sword thrust to the heart of the one betrayed. And to observe the betrayal of a loved one, like Mary did at the foot of the cross, is to live the prophecy of Simeon, "a sword shall pierce your own heart." Prof. von Hildebrand clearly shares the pain of Cardinal Burke, and how blessed he is to have such a faithful friend. As you read the words below think of the betrayals in your own life and those that are, perhaps, yet to come. May we all respond with the courage to see the pain of betrayal as a "crown of thorns" that will become a "crown of gold":


To be unjustly treated while selflessly performing God’s work done for God’s glory, a work that clearly benefits all those related to it, is – I repeat – a form of spiritual trial that only faith can solve. Indeed, God’s ways are not our ways.....It is most baffling that God allows a work that He himself encouraged and directed, to be destroyed, and even permits secular trends to invade His vineyard.

I am fumbling to find an answer. Maybe the most dramatic Catholic paradox is precisely here to be found. God chooses one particularly person to work at his service. This person responds generously, and puts both his mind and heart in the mission confided to him. Indeed, woe to the man invited to work for the Lord, and chooses to go back to his “business.” But he who faithfully responds is told while lovingly doing his work, that “he is useless servant” (Lk, XVII) and moreover is reminded that God – while requiring his service – does not need it: for He and He alone is the one who makes his Vineyard produce rich grapes.

A human demotion (a crown of thorns) is a supernatural promotion, perceived by Angels as a "crown of gold."

“Dear Lord, if this is how You treat Your friends, it is no wonder You have so few!” St Theresa.

"Satan loves a spectacle, success, glory, and applause. If Christ has chosen the cross, Satan has chosen the stage." Fr. Livio Fanzaga, The Deceiver.

You know, at times like this I am more than ever convince that a living an authentic sacramental life is the best approach I can ever make to life.

I agree. It certainly helps one to survive the hard times!