Thought for the Day: For Those Who Think Every Word a Pope Speaks is Infallible... 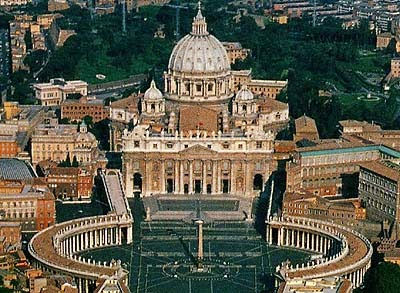 ...and that the Holy Spirit controls the bishops who cast the ballots at a conclave.

Here's what Josef Cardinal Ratzinger, Pope Emeritus Benedict XVI, replied in 1997 when he was asked by a reporter on Bavarian TV whether the Holy Spirit picks the pope:

I would not say so, in the sense that the Holy Spirit picks out the Pope.... I would say that the Spirit does not exactly take control of the affair, but rather like a good educator, as it were, leaves us much space, much freedom, without entirely abandoning us. Thus the Spirit's role should be understood in a much more elastic sense, not that he dictates the candidate for whom one must vote. Probably the only assurance he offers is that the thing cannot be totally ruined.....There are too many contrary instances of popes the Holy Spirit obviously would not have picked.  Source

Obviously we are called to honor our spiritual father on earth, but don't mistake him for someone he is not. The pope is not God and every pronouncement he makes is not necessarily from the mouth of God. We have had many bad popes who were more diligent about advancing their own interests than the will of God. How do we know a good pope from a bad one? Jesus told us, "by their fruits." How will you know if their fruits are good? Do they advance the faith consistent with the unchangeable doctrine of Holy Mother Church? How will we know if their actions are consistent with the doctrine? STUDY THE FAITH. KNOW THE DOCTRINE!

If you don't know the faith, you are susceptible to every shifting tide and every variable wind. You can only be rock solid if you are firmly attached to the rock of the faith which the Holy Spirit promises cannot be destroyed. And that is the meaning of "Where Peter is, there is the Church." It doesn't mean that Peter is holy or that everything he says is the truth, but only when his words and actions match the unchanging doctrine of Holy Mother Church. Love God, pray unceasingly, and discern the spirits.
Posted by Mary Ann Kreitzer at 8:35 AM

This is one of the reasons I'm glad Pope Francis is having this synod on the family - not just addressing these issues by himself. When the Pope in union with the Bishops teach, that has insurance of the guidance of the Holy Spirit. And that appears to be what he's doing with this Synod. Any majority result from the final Synod that is from the Pope in union with the Bishops, we can trust. That's the magisterium.

That's not exactly true. During the Arian heresy most of the bishops were in error. What they speak can't contradict the unchangeable teachings of the faith.

If a simple majority was a guarantee of the Holy Spirit's guidance then Communion for divorced and remarried Catholics (without annulment) would have won the day and we would have a NEW teaching that violates the doctrine on the indissolubility of marriage.

We all certainly need to be serious about praying for the "conversation" in the coming year before the Ordinary Synod next fall.