How Soon They Forget: Knights of Columbus Violate 2007 Resolutions 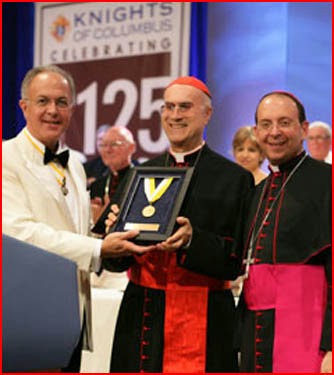 It was August 2007 and knights from all over the country were attending the 125th Knights of Columbus National Convention at the Gaylord Opryland Hotel in Nashville, TN. Cardinal Tarcisio Bertone, Vatican Secretary of State, was there to offer the opening Mass and  homily and receive the Gaudium et Spes award.

Toward the end of the meeting at its final session, the knights voted in favor of a pro-life resolution stating:


"we reaffirm our long-standing policy of not inviting to any Knights of Columbus event, persons, especially public officials or candidates for public office, who do not support the legal protection of unborn children, or who advocate for the legalization of assisted suicide or euthanasia."

At the same session, they voted:

"prohibiting such persons from renting or otherwise using facilities over which we have control, or speaking at Knights of Columbus events, or bestowing on them honors or privileges of our Order of any kind, or inviting them to serve as honorary chairpersons [like Grand Marshall?] of events, celebrations, or committees, or hold any office in the Knights of Columbus." (Source)

Well, that was then; this is now. In the past few months Knights Councils have violated both these resolutions. Madison, Indiana Council 934 will be hosting a lesbian wedding reception in April with the happy couple "using facilities over which [the knights] have control." And on March 14th, pro-abortion/pro-sodomy Governor Terry McAuliffe will be Grand Marshall at the Council 3548 K of C sponsored St. Patrick's Day Parade in Norfolk. Not only is McAuliffe a "public official who [does] not support the legal protection of unborn children" but the knights are "bestowing on [him] honors...and letting him "serve as honorary chairpersons of [an] events [and] celebrations."

I tried to find the actual resolution online, but the link from the source article was bad. I looked in the archives of the K of C. No luck. Has this been dropped down the memory hole or am I just not looking in the right place?  If any knights out there have the complete wording of the  resolutions please send them along.

It's really great for the K of C to vote in favor of these grand words, but when actions don't match...well...it's just highfalutin hypocrisy. Action speak louder than words and when councils violate the knights' policies there should be accountability, The buck stops with you, Mr Anderson! What point is there to have rules and resolutions, if the leadership is filled with toothless tigers? Is the K of C an organization of Pharisees who say one thing and do another? Or do the Knights stand with Jesus Christ who said, "Say, 'Yes' when you mean 'Yes' and 'No' when you mean 'No.' Anything beyond that is from the evil one." Seems these days colluding with the evil one is fine with the K of C. Just whistle and look the other way!