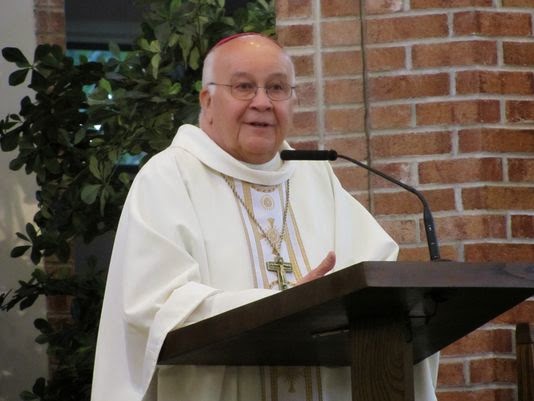 By now you've probably heard about the Catholic high school religion teacher, Patti Jannuzzi, who was fired from her job for daring to post a politically incorrect (although theologically correct) Facebook post about homosexuality. She was suspended and put on paid leave, more accurately...terminal administrative leave. Her contract, the family reported, will not be renewed.

Her bishop, Paul Bootkoski, had the temerity to claim that those blogging about her being fired are misrepresenting the situation.
Well, of course, it all depends on the definition of fired and the definition of lied. Jannuzzi has taught for over thirty years and is now booted from the classroom, and told by diocesan lawyers that there is no way she will be teaching again next year. That sure sounds like being fired to me.

But the diocese keeps spinning the story and the latest is that no personnel decisions for next year have been finalized. Anyone following the story must be dizzy at this point. It reminds me of Cardinal Kasper at the Extraordinary Synod claiming he didn't say what he said about the African bishops until the audio tape appeared when he claimed he did say what he said, but it was off the record.

"Oh what a tangled web we weave when first we practice to deceive."

As for Bishop Bootkoski, perhaps he is vulnerable on this issue. Randy Engle, a serious catholic researcher, left this comment on the Angel Queen website a few days ago:


March 25, 2015 at 12:10 PM
In my book, The Rite of Sodomy which was published in 2006, I have a lengthy section on the homosexual activities of Cardinal Theodore McCarrick. The morals charge against McCarrick are longstanding and have since been verified by Dr. Richard Sipe, among others. As I note in my Epilogue, Bishop Paul Bootkowski , who was consecrated by McCarrick, was accused of having a homosexual relationship with Father Alfonso de Condorpusa of the Newark Diocese. Over the years my charges of sodomy against McCarrick and his homosexual offspring has never been challenged. Homosexual bishops and cardinals are blackmailable and make a perfect propaganda conduit for homosexual groups seeking to undermine the moral teachings of the Catholic Church. Randy Engel

Is Patti Jannuzzi suffering the penalty of speaking a politically incorrect truth in a diocese headed by a bishop who is compromised and vulnerable on this issue? It is certainly a legitimate question in view of the past several decades that revealed active homosexuals in the priesthood and episcopacy and homosexualists (heterosexuals who enable and advance the homosexual agenda) who worked hard covering up clergy sex abuse and perpetuating active homosexuality.

Thanks for the additional input on the Bishop. I sent my email out before they closed his email reception. I was sharing this on another blog and someone was upset that I wasn't more harsh with the Bishop, etc., so then I had to respond with my reasoning as to why I said what I said...so, here is my email to the Bishop:

I have just read your statement following the "judgment of Patti Jannuzzi" by the homofascist lobby. You state, "We are a compassionate Catholic community committed to treating our students, faculty and parishioners with respect. We have never wavered from our traditional Catholic teachings." To me, this is a great statement to be followed by (just a personal recommendation)..."Therefore, while we are disturbed by Patti Jannuzzi's lack of respect in her comments, we are confident that her steadfast love of the Church and of her neighbor coupled with her excellent 30 year record as a teacher (I believe that was printed in an article that then went on to slam her) merit our forgiveness for the post in facebook. We welcome Patti's return and know that this matter is behind us."

Then, you say some odd things, " The teacher’s comments were disturbing and do not reflect the Church’s teachings of acceptance. However, she has never been terminated, as some media outlets have reported. She has been put on administrative leave. There has been no interruption in her pay and benefits." That is an interesting tense...has never been...which sounds as if she will not be welcomed back after her "administrative leave," does it not?

The bottom line seems to be whether you intend to stand by a woman who has given many years of service to our Lord and His children through her teaching at the school. It appears that our Church is saying that Jesus, our Lord and Savior, would be loving and accepting to those who act on their same sex attraction (which is mortally wounding) but would not love and accept the person who said disrespectful remarks about those acting on their same sex attraction (which, I see those remarks were in a moment of frustration in response to something she read)? Really, Your Eminence? What she wrote was a sin on my list, but not mortally wounding. What we need from our shepherds is clarity on Church teading since so many are really confused. What everyone needs is no less than the Truth, Himself. To hide behind words of mercy and not act mercifully toward a teacher and mother would be far worse than her posting on facebook. Common sense.

May God bless you, guide your thoughts and your work each day,

So, then I responded to the one who felt I was too soft on the Bishop and too hard on Patti...(by the way, you don't have to post any of this, it is just my way of talking with you since, as I've said before, I enjoy the work you do--even when we disagree which is rare)...

Here’s my thinking on what I said and how I said it. We are so truly blessed with the fullness of the Truth, and those who are in darkness are lost. I placed myself in Patti’s spot, and I would have regretted saying what she said on Facebook (I do not have a facebook account nor do I tweet). We’ve got the treasure, and God wants us to give it freely. It seems to me that her words were what I might say after reading what she did…but that is venting and I would do it with those who know me. Once vented, if I were to write something, it would be directed to the activist and would hopefully be the hard Truth with charity. More is expected of us because we own the Truth and people need to hear it day in and day out, with charity.*

As for the Bishop, I don’t know him. I believe he has erred where Patti is concerned. I believe his support of Patti is and was zero, which too is disturbing and worse than her venting post. He, of all involved, should be the most charitable toward Patti and clearly state Truth.

I am not naive. The agenda by those who shout the loudest is real clear. But, those souls are in total darkness. I’m not really on board with what Pope Francis has said or meant to say for I’m never quite sure we ever hear exactly what he says and exactly how he says it. Truth with charity is something I have been working on for quite sometime now. Here is a portion of the meditation I read this morning:

*”Judge not” (Matt.7:1). There is a Judge above you, who will judge your judgments, who will demand of you an accounting of them, who will punish you for judging without authority…”Who are you to pass judgment on the servant of another? It is before his own master that he stands or falls” (Rom. 14.4). “Why do you pass judgment on your brother? Or you, why do you despise your brother?” (Rom. 14.10). He is your brother, your equal: it does not belong to you to judge him. You are both subject to the judgment of the great judge before whom all men must appear…think instead about the account you must render of yourself. The author goes on to quote St. James 4:11-12. Then states, “You raise yourself above your measure, and the law will soon fall upon you with all of its weight, and you will be crushed by it.” To conclude, when we give the Truth to another, Truth is not diminished but rather may grow. To those in darkness, we need to give the fullness of Truth with charity. Charity is not suspicious and does not think ill of others. Charity is mild, “patient and kind…bears all things, believes all things, endures all things.” She does not “rejoice at wrong, ” but rejoices when everyone pursues the Good in Truth (1Cor. 13:4-7).” Jacques Benigne Bossuet, 1627-1704

God bless you for all you do!

Thank you for your comments and insights, Mariann. Much food for thought there. Good letter to the bishop also.

It's interesting. Some of Patti Jannuzzi's past students have witnessed to her kindness and warmth. I have no doubt she would treat students with same-sex attraction in a sensitive way without tickling their ears. If so-called charity encourages a person to remain in mortal sin, it is certainly not charitable.

Randy Engel's comments prompted me to search for the "Rite of Sodomy". She has made it available in 5 ebooks; vol 3 documents the Amchurch and the impact of perverted clerics on Mother Church. http://www.newengelpublishing.com/categories/eBook/

Why do these 'compassionate' people treat a disciple of Jesus, namely Patty, so badly. Does compassion only work one way?