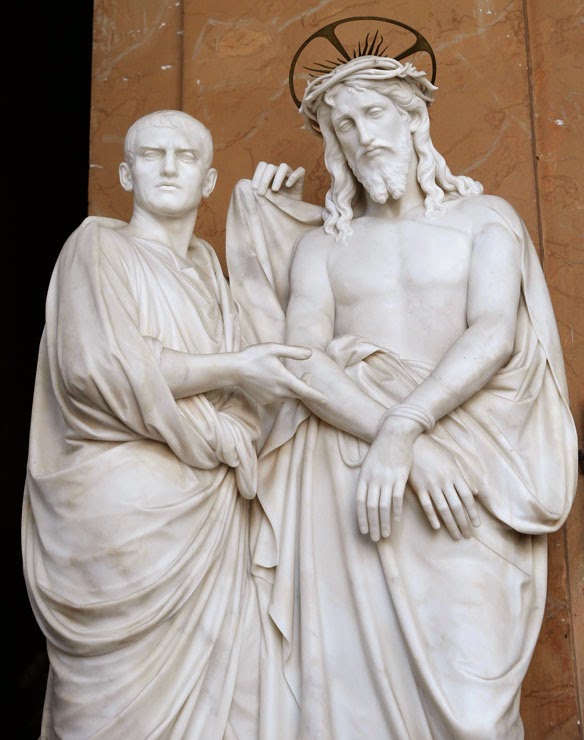 In the Passion today, the Narrator reads, "So Pilate, wishing to satisfy the crowd, released Barabbas to them and, after he had Jesus scourged, handed him over to be crucified."

Isn't pleasing the crowd the epitome of political correctness?

Pilate knew the truth, despite his cynical question, "What is truth?" He told the crowd Jesus was innocent when he said, "I find no guilt in him." He further illustrated it when he asked, after releasing Barabbas, what they wanted him to do with Jesus. At their insistant cry, "Crucify him!" he again reflected his awareness that Jesus was innocent. "Why? What evil has he done?" Even the Gospel writer, Mark, witnesses to Pilate's awareness of the truth writing, "For he knew that it was out of envy that the chief priests had handed him over." But still, he had an innocent man scourged nearly to death, perhaps in the vain hope that the mob would have pity on him.

Pilate had no backbone. His chief concern was self-preservation, so he went along with the popular, politically correct decision -- "Crucify him!"

Going along with the popular position is endemic in every age. How many innocent people went to the guillotine because they were in the politically incorrect position of being aristocrats, or priests, or religious. After raising "reason" to a god, the French mob unreasonably threw truth and justice out the window. Those virtues were politically incorrect.

I used to wonder how the horrors of the French Revolution with its "reign of terror" could have happened. How could any normal person go along with the mass show trials and executions? Especially when they saw the dignity and courage of those who went to their deaths.

I don't wonder any more. The mob's demand for politically correct solutions to problems explains it all. Ferguson is a good example. Blame, target, and execute those who oppose popular precepts; they're all part of political correctness.

Today's Gospel exposes Pontius Pilate as the secular saint of political correctness, and his minions are legion. Stand up for the truth against an adult son who insists that marrying his same-sex partner is crucial to his "happiness' or to an adult daughter who marries outside the church? Oh no! How could any parent think of alienating a child by embracing God's politically incorrect truths about marriage and sexuality?

Political correctness and human respect go hand in hand. Many today would rather offend Almighty God than offend family members or even perfect strangers. After all, defending the politically incorrect truth might make them susceptible to the metaphorical guillotine cutting them off from social acceptance. They might lose their seats at the tables of power. They might even suffer personal losses: job, home, etc. Who could possibly expect that?

I'm going to meditate today on the ways I pay homage to Pontius Pilate in my life. When do I sacrifice the truth because to speak or act requires a risk that I may offend someone? I take comfort from the fact that Jesus' closest friends all served Pilate when they ran away from Jesus in the garden. But I hope to return, as they did, with a zeal that makes me willing to suffer martyrdom rather than ever bow to political correctness again.

Lord Jesus, give us the courage to shun what's politically correct, embrace your truth, and share it with great love and humility.

Mary Ann, great points! "wishing to satisfy the crowd" jumped out at me too.

One refinement in the interest of unvarnished truth would be "supporting a woman's right to abortion" more accurately stated as "supporting a mother's right to kill her unborn child". It is not just any woman, but a mother. "Abortion", "euthanasia" or "suicide" are all words that describe circumstances of the underlying fact of "killing".

Truly a meditation for our times. Thank you for this.

This Saturday evening, WETA is showing the movie "Barabbas" which was released in 1962 for US audiences.

Bravo!
Very well done; I recognise myself in this. What a great way to begin this week than to see how far from the truth we can slide when we choose to accommodate every one around us.
Thank you.

If Pilate was using modern political parlance, he would have said "I'm personally opposed to this crucifixion, but..."