Is It Civil War in the Virginia Knights of Columbus? 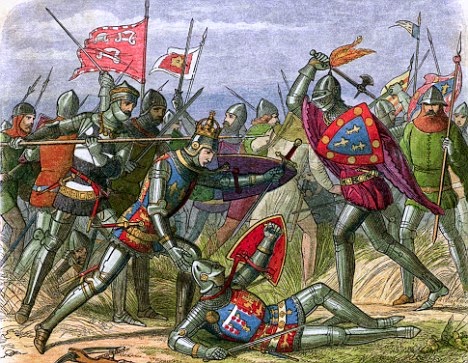 Frankly, I hope so.

When good and evil are lining up on the battlefield, it's time to choose under whose banner you'll serve: our Lord and Savior's defending the true and the good, or under the banner of the evil one promoting the lie.

"I have set before you this day life and death, the blessing and the curse. Choose life, then, that you and your descendants may live, by loving the Lord, your God, heeding his voice, and holding fast to him." (Deut 30:19) (Read the original  posts about the scandal here and here.)

I'm happy to say that the Knights' Council at our little parish, St. John Bosco in Woodstock, is filled with real men. Here are a few of the letters going to the State Deputy about Norfolk Council 3548 selecting Gov. McAuliffe as Grand Marshall for their St. Patrick's Day Parade:

From the Grand Knight, Danny Flathers:

"For what profits a man to gain the whole world and lose his own soul? Or what shall a man give in exchange for his soul?" -- Mt 16:26,

My Brother Knights of Council 9002:
Many of you may have already heard that Knights of Columbus Fr. Robert B. Kealey Council 3548, Norfolk, VA, has decided to honor Virginia Governor Terry McAuliffe as Grand Marshall for their 2015 St. Patrick's Day Parade. The council has conducted the annual event since its inception in 1967.

As almost any sentient being of the Commonwealth very-well knows, our governor is an unabashed proponent of homosexual marriage and broad abortion "rights" -- calling himself "a brick wall" against restrictions on abortion in particular. This places our voluntary association with him as antithetical to what any practical Catholic firmly believes.

Thus, the selection of Governor McAuliffe as a grand marshal of an event sponsored and promoted by any subdivision of the Knights of Columbus is deeply problematic -- as there can be no justification for this! Consider: Should a council at some future date sponsor a Black Mass in the name of openness and tolerance?

This is but the latest example of wrong-headedness committed in the name of our Order: Council 935 in Indiana had managed to gather unwelcome publicity and scandal this past Fall by renting its hall for a lesbian "wedding" reception. When members objected upon learning of the egregious error, the council managers for hall rental reversed their decision -- only to expose the council to lawsuit. As it now stands, that council now believes it is compelled by negative publicity to accommodate evil.

I'm attaching an extraordinary letter on the instant parade scandal by the pastor of Holy Trinity Catholic Church in Norfolk -- published for this Sunday, the Third Sunday of Lent. Father Dan Beeman exposes a perfidy committed by those of the resident council that frankly, makes me deeply ashamed for my association with them as Brother Knights.


Conversely, I am extremely proud of this pastor for the courage it took to arrive at the action in severing the parish relationship with a council that has clearly lost its way. I commend this holy priest for his forthright fidelity to church teaching, and strongly urge you to join me in praying for his continued bravery.
The questions remain: Where are the State council officers on this controversy? What is Supreme to do about this? What are we at Fr. Cyril Karlowicz to make of it? Does the Order truly mean what it says as revealed through our scripted exemplifications?

I cannot answer about State -- though I hold no illusions that our returning resolution on discipline will be endorsed by them. I cannot answer for Supreme, either -- though I am no fan of their broad approach to packing membership numbers at the expense of recruiting truly qualified candidates, albeit in fewer numbers.

As Grand Knight, I can answer for this Council. It is our personal commitment to embrace the teachings of the Magisterium and to witness them through our individual actions as Brother Knights. As to the superior levels of the Order, we cannot work to correct an organizational problem without being in the organization.


From the Council Financial Secretary (my husband):

I was outraged and saddened to read that Governor McAuliffe has been selected by Norfolk's Council 3548 to be Grand Marshall of their St. Patrick's day parade. What a public scandal this is to honor a pro-abortion, pro-gay marriage politiician. It's not like Governor McAuliffe's positions are not well known. He campaigned and now governs as a champion of both these issues. I urge you to do whatever is necessay to have Council 3548 recind their invitation to Governor McAuliffe.

Public scandal is a serious sin (see Catechism of the Catholic Church 2284-2287). It is not far fetched to think that many people will be led to believe that abortion and gay marriage must be perfectly O.K. After all, the Knights Of Columbus are honoring a politician who supports both and the Knights are defenders of the faith! How many poor souls will be led astray into serious sin? Jesus had something to say about those responsible: "Whoever causes one of these little ones who believe in me to sin, it would be better for him to have a great millstone fastened round his neck and be drowned in the depth of the sea."

We Knights must stand strong for the faith and must support our priests. I find it very disturbing that Council 3548 has ignored the advice and counsel of their Pastor, Fr. Dan Beeman.

I again urge you to make sure this public scandal does not occur. Please inform me of the action the State Council will take.

The letters have been flying back and forth between State and local councils with copies to all the state officials of the K of C and to Supreme head, Carl Anderson, not just from our little council but others as well. State is doing everything they can to make excuses for the despicable actions of the Norfolk council. They're in damage control mode, but sadly, the only damage they appear to care about is the internal dispute injuring the "fraternity" of the order. Damage to the faith, the scandal to both Catholics and non-Catholics of honoring a notorious pro-abort, pro-sodomy politician doesn't even seem to be on their radar screen. But then that has been going on for years and, in the eyes of K of C bureaucrats, the "bad guys" always seem to be those upholding the faith and calling Supreme to step up to the plate and put feet to the faith. Actions speak louder than words and when your actions are lukewarm, watch out.

The next lines of that verse are especially a propos to the Knights who are very protective of their financial goods. ""You keep saying, 'I am so rich and secure that I want for nothing.' Little do you realize  how wretched you are, how pitiable and poor, how blind and naked! Take my advice. Buy from me gold refined by fire if you would be truly rich....Let him who has ears heed the Spirit's words to the churches.'" (Rev 3:17)

Pray for the Knights of Columbus to become the warriors for the faith envisioned by Venerable Fr. Michael McGivney.  Our world is sadly in need of real men, I know many in the Knights including the one earest to me with whom I share my life. Unfortunately, those in positions of power seem to have embraced worldly politics and human respect over the spirit of God. They need a little tough love from John the Baptist who knew those who who would serve God may never conform themselves to the world.

To contact the Virginia state officers about this scandalous situation go http://www.vakofc.org/officers.html