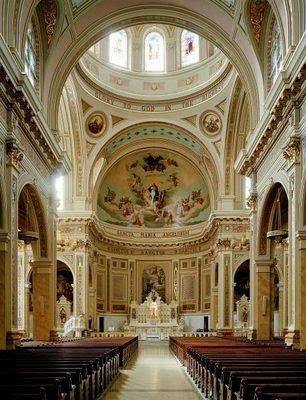 I just started reading St. Augustine's City of God. I'm hooked. In the first chapter St. Augustine describes how the barbarians invading the Roman Empire spared those who took refuge in the churches. Imagine...the marauding barbarians were Christians who stopped at the church doors. Even pagans who took refuge there were spared. So how did they say thank you? They blamed the Christians for the invasion.

Augustine isn't too happy about it and here's what he says:


Contrary to the custom of war, these bloodthirsty barbarians spared them, and spared them for Christ's sake...in those places specially dedicated to Christ's name,and of which the very largest were selected as sanctuaries,...Therefore, ought they to give God thanks, and with sincere confession flee for refuge to His name, that so they may escape the punishment of eternal fire -- they who with lying lips took upon them this name, that they might escape the punishment of present destruction. For of those whom you see insolently and shamelessly insulting the servants of Christ, there are numbers who would not have escaped that destruction and slaughter had they not pretended that they themselves were Christ's servants. Yet now, in ungrateful pride and most impious madness, and at the risk of being punished in everlasting darkness, they perversely oppose that name under which they fraudulently protected themselves for the sake of enjoying the light of this brief life.

Gosh things haven't changed much since the fourth century. People will take all the gifts God gives them and then blame Him when things go wrong. Some things never seem to change.

I'm saying thank you to God today for every breath I take, every mouthful I eat, every thread on my back, and every person in my life who brings me joy (and even those who don't). And the next time you need refuge from the barbarians in our society, go to Church. "O God, you are my refuge and my strength."
Posted by Mary Ann Kreitzer at 9:48 AM