Joe Biden Gives the Bird to his So-Called Catholic Faith 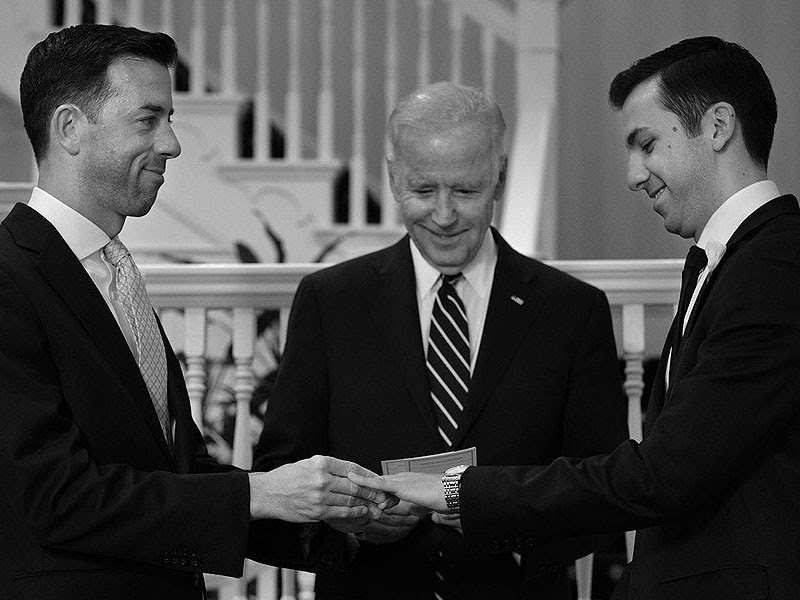 Biden had to get special permission to do this, so we know it was an act flaunting his contempt for Catholic teaching on marriage. What will be the repercussions from Cardinal Donald Wuerl (Archdiocese of Washington, D.C.) or Biden's Wilmington bishop, W. Francis Malooly? I'm not holding my breath. Several bishops have recommended in the past that Biden be banned from speaking in Catholic venues and abstain from Communion, but there's no evidence he's ever complied.


Canon lawyer, Ed Peters, says Biden's act is not an act that justifies excommunication, but it could be if the proper authorities take action:


No canon excommunicates a Catholic for officiating at a “same-sex wedding” but Pope Francis or (long story made short) Cardinal Wuerl could issue legislation making such officiating an excommunicable crime. Canon law has long responded to changing pastoral needs with new legislation, and this seems to be one more example of where new law might assist the Church in dealing with a new and grave problem.

Amen to that, but do any of us expect the "hapless bench of bishops" in the United States to do anything to protect the flock from scandal. They are too busy justifying giving money "for the poor" they've defrauded from Catholics in the pews to so-called charities that support abortion and distribute condoms and teach explicit sex-ed to third world youth.

Don't you wish you could see how many U.S. bishops vote for the Clinton/Kaine ticket in November? Frankly, I'd be surprised if it isn't a majority.

A commenter over at Vox Cantoris named nazareusrex summed it up so succinctly in 20 words....

"They hate us because they are a sect of sodomites priests and this is why they are rebelling against God."

Wuerl is ALL ONBOARD with what Biden did...make NO mistake....Many, MANY of the bishops are, and the ones who aren't are weak, cowardly, feckless,a nd failed. It is truly night.

More and more, I really am feeling my soul cry out, "Eloi, Eloi, Lama Sabachthani?"
I think we are well into the passion, with the deepest pain yet to come.

Good old Joe...he used claim he said his Rosary every day during his train commute back and forth to his home in Delaware. I am absolutely sure Cardinal Wuerl won't object to Joe performing gay wedding ceremonies.

He can kiss his salvation goodbye and the likelihood he will have the company of his bishops is pretty high.