The Eighth Commandment tells us, “Thou shalt not bear false witness against thy neighbor.”  Most of us don’t go out of our way to say things about the people we know that aren’t true, so it may seem to many that this commandment has little to do with them.  Yet I fear it is so prevalent in our society today we can’t ignore it as being only a minor detail in the Decalogue. 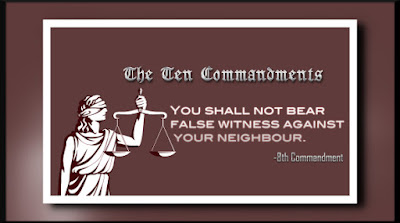 I prefer to reference the Catechism of the Council of Trent, published in 1566.   This text begins with a reference to James 3:1-12.  His warnings of the dangerous nature of the smallest member of our body, our tongue, are something we should constantly remind ourselves.

This is especially true in this country today when the liberal media constantly insist the president of the United States is a liar.  And when 95% of what comes from the mouths of the talking heads on television on liberal leaning channels is in fact a giant body of false propaganda and lies. Today politicians purposely go to the cameras to spread vicious untruth about their opponents and enemies.  They call it “playing hardball.”  I call it what it is:  sin.
Quoting the catechism:


‘“Every man is a liar;” (Ps 116:11) whence this moral disease would seem to be almost the only one which extends to all mankind:  the other, that the tongue is the source of innumerable evils.  Through its wicked instrumentality are often lost the property, the character, the life, the salvation of the injured person, or of him who inflicts the injury; of the injured person, whose feelings, impatient of control, impotently avenge the contumely flung upon them; of the person who inflicts the injury, because, deterred by a perverse shame and a false idea of what is called honor, he cannot be induced to satisfy the wounded feelings of him whom he has offended.  Hence, the faithful are to be exhorted to pour out their souls in thanksgiving to God, for a commandment of such salutary tendency, a commandment which not only forbids us to injure others, but also, on the same principle of obedience to its dictate, forbids others to injure us.”
Lying about another may cause the injured party to seek revenge or to pay back the wrong done to them in a fit of anger.  Lying about another may place us in the uncomfortable position of having to admit we are wrong and where stubborn pride prevents that, we are in a position of doubling down on a wrong doing that can literally place our salvation in jeopardy.
So, this is no small matter to be taken lightly, yet we see it on a daily basis in our newspapers, online and on television, so much of it, in fact, that we are sickened of it and can stomach it no more. What of those who don’t simply distort the truth to deceive, but literally construct information to harm another KNOWING full well none of what they say is true, for the purpose of destroying the reputation and position of another?  What if they are Catholic, have had the benefit of a Catholic education and upbringing, have not “walked away from the Church” but declare themselves to be Catholic and present themselves to a priest at mass to receive the Body of Christ?  I’d have to say they have knowingly placed themselves in grave danger of hell and simply don’t care.  They cannot say they are unaware of the Commandments of God.  They have known them all their lives.

They simply decide it is to their advantage to set them aside for the purpose of achieving a political goal.  The “end”---destroying an opponent, justifies ignoring the law of God, because it is too easy and convenient not to do so.   Naturally, they don’t say they are going to sin for the sake of winning, they simply refer to the wicked thing they do as “a tactic.”  This brief clip of Nancy Pelosi presents a case in point.  I had to watch it several times because I had a hard time believing a person could actually do this so fearlessly and without hesitation.  We saw this “tactic” during the hearing for Brett Kavanaugh.  We saw it done to Clarence Thomas.  We’ve seen it done for the last two years to Donald Trump who has been smeared with falsehoods from the day he announced his candidacy for office.   What this little clip proves is that they know full well what they are doing and they do it willingly again and again.  The catechism has this to say about the practice of detraction:


This commandment forbids not only false testimony, but, also, the detestable propensity and practice of detraction; a moral pestilence, which is the poisoned source of innumerable and calamitous evils.  This vicious habit of secretly reviling and calumniating character is reprobated in almost every page of the Sacred Scriptures:  ‘With him,’ says David, ‘I would not eat;’ and St. James; ‘Detract not one another, my brethren.’”
But, to see in its full light the deformity of this sin, we much know, that reputation is injured not only by calumniating the character, but, also, by exaggerating the faults, of others.  He who gives publicity to the secret sin of any man, at a time, in a place, or before persons, in which or before whom, the mischievous communication is unnecessary, incurs the just imputation of a detractor and a slanderer.
To the same class of detractors belong those who continue to foment divisions, and excite dissension, and who feel a malignant pleasure in sowing discord.
Posted by Chriss Rainey at 7:00 AM

If you see the full clip of Nancy Pelosi talking about the smear, she was accusing Republicans, but clearly the reason she has the strategy down pat is because Democrats have been perfecting it for years. And it's obvious that THEY are the ones with the mainstream media in their corner. Which reminds me of the saying that when someone is pointing the finger at another, three fingers are pointing at themselves. DEMOCRAT stands for Destroying Enemies by Means Of Cunning, Repulsive Accusations against Targets! That sums up their strategy along with lies and fraud whenever necessary. Sadly, some Republicans belong in their camp.