Nabi Sayeth: The Disaster that is the U.S. Catholic Bishops 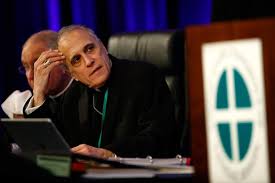 Nabi Sayeth: The Catholic Bishops of the United States are currently meeting in Baltimore for their fall meeting, and their ears must be burning! They are perhaps the most despised group of human beings in our country today.

In his brutally honest and well written book, “The Smoke of Satan”, Lay Theologian Phil Lawyer does a masterful job of giving the reader an unfiltered look at the disaster the bishops have both created and become:

“… But there has never been an honest effort by the hierarchy to make an accounting of what has happened to the Church in the past 50 years. Instead there has been a concerted effort to ignore the evidence of a spectacular pastoral failure. Mass attendance has plummeted; tens of thousands of priests and religious have abandoned their vocations; the Eucharistic liturgy has become a source of division rather than unity; religious education has been “dumbed down” to the point that few young Catholics can name the Ten Commandments or the seven sacraments; lapsed Catholics now represent the fastest-growing religious cohort in the United States. Still Church leaders speak of “vibrant” communities, placidly ignoring the overwhelming evidence of an unmitigated disaster.”

Nabi Sayeth: The bishops of the United States were once looked upon as Holy shepherds by Catholics and non-Catholics alike. But now, as a body they are the least trusted and respected. What happened?

1) So many of the bishops were/are climbers. Their goal was to capture the prize of a Cardinal or archbishops’ hat. Many of them compromised whatever personal values they may have held as priests in order to get the attention and win the approval of their superiors (such as former Cardinal MCCarrick). The Climbers focus on climbing not on the souls of those entrusted to their care.

2) Many of the bishops are either homosexual or homosexual agenda supportive. There is without a doubt a Lavender Mafia within the hierarchy of the Catholic Church. The following is from an interview of Monsignor Charles Pope by Raymond Arroyo on EWTN ….

“There are some in the Church, some of the bishops who claim based upon data that homosexuality is in no way involved in the abuse crisis, Arroyo said, that this is child predation, this is pedophilia.

“But the data suggests something very different, actually,” he queried Msgr. Pope. “Why the inability to acknowledge what is so apparent in the data?”
“There is a climate of fear and of course it’s created, I think, by our culture that you can’t say anything that’s even in any way negative or untoward towards those with same-sex attraction,” Pope replied. “And I think that, again, we have to say we’re all prone to sin, and we have to get over that fear.”

Pope said that the link between the sex abuse crisis and homosexuality is "very clear" and called it "strange" for anyone to say "this has nothing to do with homosexuality in the priesthood.”

3) While many of the bishops are highly degreed, so many lack down to earth pastoral/priestly common sense. As Pope Francis once said, “They do not have the ‘smell’ of their sheep.” Rather than DISCERN spiritual solutions to problems within their dioceses, they rely upon secular solutions recommended by their “hired guns”, that is, their Public Relations experts and lawyers.

4) Many bishops act like CEO’s of corporations rather than “fathers” or “Shepherds” to their people.

5) The people in the pews see their bishops behaving as hypocrites. They “talk the talk” but fail to “walk the walk.” People expect their bishops to practice what they preach.

6) People are furious with bishops who permit the senseless, expensive destruction of their Churches. Most people work hard and live by budgets. They expect their Church leaders to do the same.

7) People expect/demand that the hierarchy protect their children from predators. The bishops failed miserably and then covered up their failures.

Nabi Sayeth: So much more could be written on this topic to be sure. To sum up the problem, I will use the words of bishop Thomas Daly of the diocese of Spokane:

“Light streamed into Bishop Thomas Daly’s office one recent afternoon as he spoke, in sometimes blunt terms, about the widening scandal of sexual abuse by Catholic clergy in the United States.
“It’s a moral crisis,” Daly said. “We have degenerate behavior, hypocrisy and now cover-up. My thought is, ‘How much more can the people of God put up with?’ ”

On the last day, Jesus will look us over not for medals, diplomas, or honors, but for scars.

Even in Italy Catholics are very upset with Borgolio and ancient Churches are being closed and or desecrated.

I know there has be strife in the church for centuries...however, is not what we are witnessing today possibly the 'beginning of the end' of the church as we know it?