A Good Friday Gift from Hilaire Belloc and Jacques Tissot 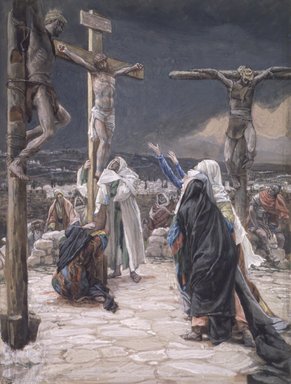 Death of Jesus by Jacques Tissot (1836-1902)
Our Lord and Our Lady
by Hilaire Belloc
They warned Our Lady for the Child
That was Our Blessed Lord,
And She took Him into the desert wild,
Over the camel’s ford.


And a long song She sang to Him
And a short story told:
And she wrapped Him in a woollen cloak
To keep Him from the cold.
But when Our Lord was grown a man
The rich they dragged Him down,
And they crucified Him in Golgotha,
Out and beyond the town.
They crucified Him on Calvary,
Upon an April day;
And because He had been Her little Son
She followed Him all the way.
Our Lady stood beside the Cross,
A little space apart,
And when She heard Our Lord cry out
A sword went through her heart.
They laid Our Lord in a marble tomb,
Dead, in a winding sheet.
But Our Lady stands above the world
With the white moon at her feet.
“Our Lord and Our Lady”, from Verses, published 1910.
I have always loved Hilaire Belloc, his histories, his sense of humor, and his poems. My favorite, I think, is Courtesy which we need so badly today. No truer words were ever spoken than his "The Grace of God is in Courtesy."

But I want to focus especially on the artist, Jacques Tissot. He is a living testament to conversion and forgiveness. What could be more appropriate on Good Friday? Tissot scandalized his times with risque paintings that showed too much "stocking and petticoat." That changed abruptly.

He was working on a series of paintings of the women of Paris when he experienced a vision while attending Mass at Saint-Sulpice. It changed his life and his art. He painted his vision of Jesus comforting the poor inside what looks like the ruins of a church. It brings to mind the fire at Notre Dame this week doesn't it?.


In fact, the resemblance is rather eerie:


Tissot went on to do 350 watercolors of the New Testament depicting the Life of Christ. He also did a series of paintings based on fourteen books from the Old Testament.

From sinner to evangelizer in art, he certainly shows us Christ's message of conversion on this Good Friday! I'm praying for the repose of his soul today and for Hilaire Belloc. One evangelized with words, the other with paint. May they both enjoy the glory of the Father's house.

Posted by Mary Ann Kreitzer at 8:43 AM

The Catholic Thing has a Stations of the Cross meditation today using Tissot's watercolors from the Brooklyn Museum collection. I would like a booklet using these images to use for my private devotions. This is not the typical stations generally used, but every painting draws you in to the passion of Christ. May God give you a blessed and fruitful Good Friday.

I wasn't familiar with him, but now I will be looking for a book at the library. What a source for meditation!