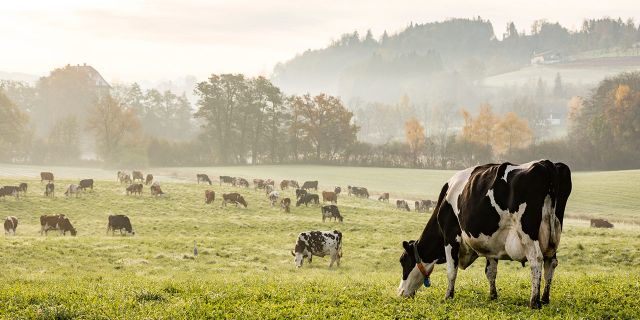 I would dare to say most people hearing Alexandria Ocasio-Cortez’s proclamation that we have to get rid of cows simply thought of their Big Mac disappearing or their standing rib roast at Christmas.  Maybe they thought of their summer steaks on the grill or their Philly cheese steak sandwiches.  Or even their corned beef savored on St. Patrick’s Day.


I thought of the book, “Assignment in Utopia” by EugeneLyons, published in 1937.  Lyons was a gung-ho all in dedicated communist who accepted an assignment in Russia as a journalist.  He went there with much anticipation of seeing a “new world order” unfolding before his eyes.


“I thought, myself a ‘socialist’ almost as soon as I thought at all and years before I had heard of the Communist Manifesto,…..  I learned the proofs that capitalism is doomed, I knew for a certainty that the whole world was one battle ground, contested between fat-bellied Capitalists and downtrodden Workers, and that victory for the Workers, for my side, was inevitable.”


He said this upon leaving the USA bound for Russia as a journalist anxious to report to the world what was happening there.


“The farewell party arranged by my friends included the cream of the communist intelligentsia, with not a deviationist in the company.  They were sending off one of their very own, proudly aware of his determination to use the opportunity for spreading the gospel whose fountainhead was in the Kremlin.


The following evening, December 31, 1927, on New Year’s Eve, I sailed with Billy and our five-year-old daughter, Eugenie, for the land of our dreams.”


Lyons is an excellent writer and his account of life when he got there is as clear and realistic as it gets.  After his initial adjusting to Moscow, he is finally invited to take a trip into the countryside to see how this mighty transition to communism is actually being carried out.  It didn’t take long before reality hit him in the face and the propaganda he thrived on began to fade as the pain and suffering of the peasants became unavoidably evident.


The revolution began in the city where mobs can easily be formed and ginned up with torches and intoxicating rhetoric, but for the change to actually take place all aspects of society were required to be brought in, including rural districts where people farm and raise families and pass down traditions from one generation to the next.

Moscow ordered that all farm land be confiscated and organized into “collectives” run by little bureaucrats who knew nothing about management but were willing to take the job for the power and title it offered them.  The resistance to this by those who had farmed this land for ages was futile, but rather than give in without a fight, they did the only thing they had left to do.  They decided to kill all the livestock.  The alternative would be to have it taken away from them without compensation.


“But the body social, like the human body, can stand so much pain and no more.  Every good surgeon knows this, and now the social surgeons in the Kremlin were to learn it, though they forgot the lesson too soon.  The country reacted to the pressure in an unexpected and calamitous manner.  Before capitulating to compulsory collectivization, the peasants took the precaution of slaughtering their livestock.  Even before the order to liquidate the kulaks as a class was decreed, the peasants had begun to kill their cattle and sheep and pigs for meat and hides, rather than merge them in socialized herds.  Now this practice became epidemic.  In some places more than half the livestock was destroyed, and in the country as a whole the depletion was alarming, the losses being in direct proportion to the coercion used to achieve socialization.


“The Kremlin prescribed heavy imprisonments and other punishments for the slaughter of cattle.  Then it decreed the death penalty for killing livestock—an extraordinary measure even for an extraordinary time.  But the animals continued to be destroyed by the hundred thousand all the same.  It was this frightful slaughter –a sort of convulsive reaction to pain---which, more than any other single factor, recalled the Kremlin to its senses.  The government might not be alarmed by the human slaughter, by the death of tens of thousands of kulak infants, it might ignore the meek plea of Lenin’s widow for mercy, but it could not ignore the destruction of the nation’s horses and cattle.  That represented working power and food and raw materials, whether socialized or privately owned.  It meant the impoverishment of the agrarian resources they wished to socialize.  ………..More animal power had been destroyed by far than could be replaced for many years by mechanical power.  At one blow, the Stalin regime, for all its undaunted ‘realism’ and hard-boiled practicality, had handicapped the revolution by a catastrophic sacrifice of meat, dairy products, wool, leather, and other animal products.


"A large measure of the food and goods shortages of the following years may be attributed directly to the extermination of animals by desperate peasants as their automatic reaction to forcible collectivization.”


Has Alexandria Ocasio-Cortez thought about this?  Has she considered what life would be like without things like dairy products?  Butter, cheese, milk, cream, ice cream, and yogurt?  Has it occurred to her the number of companies that would be put out of business if the natural resource for their products was cut off?  Has it occurred to her this would end the production of leather for boots, shoes, bags, belts, seat covers, furniture, book binding, and wallets? Has it dawned on her there would be no more manure?  No more naturally fertilized fields where cattle graze?  Think of the thousands and thousands of people who are employed because we have cattle.  These are only a few of the many products we get from cows.

This is an interesting site that further illustrates the usefulness of cows in our every day lives.  It is called “Everything but the Moo.”  And here.  According to this link, approximately 500 pounds of each cow is usable meat, but more than 600 pounds of every cow is used for something else.  Amazing.  God knew what he was doing when he gave us livestock.  The socialists who think it isn’t necessary are messing with a natural balance they failed to recognize or appreciate.

(Note:  Consider reading the book, Fueling Freedom by Steve Moore and look for an old copy of Assignment in Utopia for your library.  Steve's book is positively brilliant.  It is everything our kids should be learning in school about energy and carbon dioxide and are not being taught.  The Lyons book is a very valuable accurate unvarnished account of the USSR prior to WWII.  It should be preserved.)
Posted by Chriss Rainey at 7:30 AM

Great article, Chriss! Thanks for the references.