Seattle is Dying and it Isn't Alone A friend sent me a link a few days ago to a documentary titled Killing Seattle and I watched it in horror.  It is an hour long, but you can get the idea in the first ten minutes what the problem is and how dire it has become.  The calamities highlighted in this film are currently being experienced not only in Seattle, but also in San Francisco and Los Angeles and a growing number of other cities in the USA.

We were in Seattle ourselves just last August and I have seen firsthand the kind of filth and squalor portrayed in the documentary.  Garbage is everywhere you look.  Tents are everywhere---on sidewalks, along highways, in medians, behind buildings, beside parks, offices, etc.
What is not seen are toilet facilities.  I’ll leave it to you to imagine the rest.  We rode in a bus about 40 minutes from the airport to the docks where we boarded a ship to Alaska, but by the time we arrived I felt we had taken a journey through a third world country to get there, not one of the American cities we used to take pride in. 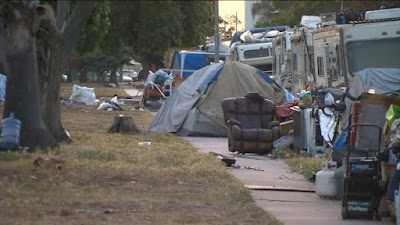 I couldn’t stop thinking to myself, why are they doing this?  Why is this allowed?  Why doesn’t someone do something?  Why would people choose to live like this?  What is wrong with these people?  The documentary makes it clear that something IS BEING DONE.  Seattle, we are told by the narrator, spends a BILLION DOLLARS a year on the problem.  But the more they spend the bigger the problem grows.  People have now nicknamed the city Free-attle because it is where people go to get “free stuff.”  I’ll leave it to you to watch the video to learn more about the situation.

As Catholics, however, it shouldn’t surprise any of us that people’s lives can go off the rails if they abandon God.  I wondered what the Church in Seattle is like and if it is doing its job of offering people an alternative to what is literally destroying their existence here on earth and preventing them from any hope of immortality when they die.  And what might we expect the Church to do for these people?  The answer to that is simple:  tell them the truth.  Preach the Gospel.  Warn them of hell.  Tell them of Life Giving Water.  Teach them how to “deny yourself, take up your cross, and follow Jesus.”


I Googled “Seattle Catholic Church” and a list of names came up.  I clicked on a couple and read the reviews to find out what people had to say about them.  One said they were upset to find gender neutral bathrooms.  In compliance with city ordinance it seems.  Most reviews were badly written and generally by people you could guess spend a lot more time on the internet than on their knees in a pew.


Below are a few of the reviews in red and my comments underneath in parentheses.


“I'm an atheist. But there are certain things that draw me back to my born religion. This church is beautiful. There have been times in my life when the deacon has advised me on life events. That was not just wanted, but deservedly needed. I'm so grateful for this place.”

(This person is named Katie.  Pray for her.  Is she calling herself an atheist because if she does, it means she is not obliged to do the things God commands us to do?  Is it easier to go through the day just being your own boss and not having to worry if it pleases someone else? How many others think peace of mind is that simple?  Something tells me Katie knows she is wrong, but hasn’t yet decided to “deny herself.”)


“First and foremost, when I first looked at the reviews for this parish, I was somewhat concerned after reading the reviews of Patty and C T below. I don't know what they were taking or smoking but I never felt that the parish "deviated" from the Catholic Church including what is required in Canon Law. Of course, if you're looking for a pre-Vatican II parish, this place is not suited for you. Overall, “……(name of church withheld) was a wonderful visit with an active community and a welcoming place.   ………… We came to this parish and was amazed by the liturgy, homily, and the essence of welcomeness. I also love the song following communion to be reflective and the shaking of hands before mass. The community is indeed alive and the Jesuits are doing a great job there. I will definitely be returning to this parish if I was in Seattle!”

(This comment was left by John.  Pray for him.  I somehow doubt he is any expert on Canon Law, but what is clear is the fact he knows things have changed dramatically since Vatican II.  What seems most important to him is that the place is “welcoming” and includes shaking hands and being friendly.  It makes people feel good about themselves.  Nothing more is required than to simply be yourself.)


“I went here on Christmas Day in 2012 and 2013. I don't remember much of the first time, but the second time was stunning in almost every possible way. The facility is inspiring, with beautiful stained glass art and tall ceilings. It's what you'd call a traditional-looking church. The music was touching and peaceful. But these things weren't what really made the difference. The most important part?  The sermon, of course. It was, to say the least, uplifting and powerful. The pastor started by apologizing to all of us for the people the Catholic Church has hurt. This was inspiring, humbling, and entirely surprising. It's the last thing I would have expected in a Catholic church. Even looking back on it now, several months later, I want to weep for joy. Reconciliation does seem, at least in some small way, possible, with efforts like these. The pastor's sermon centered on helping the poor; he talked about looking at a grandiose church but then casting your gaze downward to see the homeless person in front of the church doors. It was a powerful example of how the priorities for many religious people are often perverted; many religious people focus so much on their faith and pleasing God that they neglect or even actively oppress their neighbors.(This review was written by Casey.  Pray for him.  The sermon was not only, it seems, an apology for the “hurt caused by clergy” but also a kind of apology for the beauty of the church itself and the money spent to make it “grandiose” when the funds may have been better spent taking care of the poor.  Seems to Casey too many people are “focused on their faith and pleasing God.”  Maybe Casey thinks they should double down on “social justice” and forget about maintaining the altar of sacrifice.)


“For the last couple years, I have made a tradition of attending Christmas Eve mass at “……”(name of church withheld). I am not a religious person, but have a good deal of respect for the more moderate and academic elements of the Catholic faith. I find that the clergy at “……” preach a message that I can support.
Last year, the Christmas Eve sermon dealt with Lord of the Rings. I am rather hazy on the specifics, but I believe they likened the journey of the Fellowship to that of Joseph and Mary. This year, the priest did something that I consider to be very brave and analogized the message of Christmas with his recent return to Alcoholics Anonymous. He stated that Christmas time, like the support given at AA is supposed to refocus our lives away from the cynicism of the world and give us hope for a new beginning. That is the sort of positive message I like to hear from a religious leader. The church itself is a beautiful old building. I find more modern churches to be entirely lacking in character. “…….” has personality. The architecture and decoration look almost Byzantine with faux mosaics on the walls colored with rich blues and gold. There is a distinct Moorish influence to the design of some of the art. A massive old pipe organ soars above the balcony and long iron lamps hang from the high ceiling.

(I think we must remember, when you leave the door unlocked, you never know who will wander in.  And they come for a variety of reasons.  In Seattle, there are a lot of people with plenty of reason and it isn’t fair to blame the Church for what enters the door, but if there’s one thing that should be constant it is the rock solid message of unchanging doctrine that they leave with.  When a person does decide to step outside the world and into the environment of God who resides in the Tabernacle, they should not get more of the same.  Nor should they decide to come back only because they were not told things outside their personal comfort zone or self prescribed philosophy of life.  They should come back, if they do, because the message inside the Church is NOT what the world tells them.  What the world tells us all is what is Killing Seattle and what leads to a shortened life on earth and an eternal one in hell.)


Pray for God to give all these people who attended this church and left these messages, in badly corrupted Seattle, the grace they need to see the truth and strive to live in the light of Christ.