What the Stars Can Teach Us

I like stars.  I always have.  "Twinkle Twinkle, Little Star, How I wonder what you are."

I grew up in Texas and everyone knows, “The stars at night are big and bright, deep in the heart of Texas.”

Now where I live, 13 miles west of Washington, D.C. it is nearly impossible to see more than a dozen of them on any night whether the sky is clear or not because city light obscures them from view.


We had a chance a few years ago to use a little log cabin that is located between Lexington and Staunton Virginia, just a few miles away from Interstate 81 that belongs to a friend of ours.  It’s in farm country.  The mooing of cows is about the only noise you hear there other than song birds and an occasional rooster during the day.  Night is nearly silent but for the crickets and a frog or two in the creek that flows through the adjacent pasture.

In this silence is the night sky, black as ink and lit up with a million stars.  I don’t know the name of a single one of them.  I can barely find the Big Dipper.  The rest of the constellations are a complete mystery to me, but the sky as a whole is enough.  I like to think of these stars being the same stars that hung there and twinkled when the shepherds of Bethlehem watched their sheep two thousand years ago.  The same stars my great great grandparents saw as they sat outside in the evening after a long days work.   The same stars my own great great grandchildren will see one day. 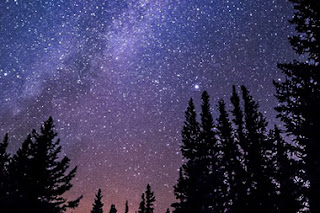 My favorite memory of star gazing is with my aunt when she was a young mother and I was still a teenager.  She and my uncle lived on an Air Force base where housing was clustered around a shared front lawn.  In the summer, after the little ones were tucked in for the night, the mothers would slip outside in the cool breeze of the evening for a little quiet time and lay face up in their lawn chairs, gazing at the sky and soaking in the beauty of the stars.  They would laugh about the day’s events, and cry about their troubles, sharing comfort and advice with each other as women do.  Just them and the stars and the watchful eye of the God who loves us.  They didn’t linger long since morning comes quickly and the little ones would be up again soon, wide eyed and busy tailed, but these quiet moments together under the beauty of heaven was enough to send them off to bed knowing that life goes on, and so would they.

I think there must be something about looking at a star that lets you know for all you think of your problems, they are not nearly as big as the sky and if God can manage the universe, then maybe things will work out as He has planned.


I love the litany in Daniel chapter 3:24-90.  The three who were thrown in the furnace begin by praising God and eventually move on to calling on each object or thing in creation to do the same.


60) All you waters, above the heavens, bless the Lord, and praise and exalt him above all forever.


61) All you powers, bless the Lord; praise and exalt him above all forever.


62) Sun and moon, bless the Lord; praise and exalt him forever.


63) Stars of heaven bless the Lord; praise and exalt him above all forever.”

But how, we may ask, can a star do anything but twinkle?  Or any such object for that matter, without a voice like our own, sing praise?

Genesis 4:10 says, “God then said:  What have you done?  Your brother’s blood cries out to me from the ground!”

Luke 19:39-40 says, “Some of the Pharisees in the crowd said to him, ‘Teacher, rebuke your disciples.’  He answered, ‘I tell you, if they keep silent, the stones will cry out.’”

In Acts chapter 4, Peter and John are ordered to stop talking about Jesus, but Peter says in verse 20, “We cannot possibly refrain from speaking about what we have seen and heard.”

This is how any of us or any part of creation speaks, as though there is no option if we intend to remain obedient and faithful to God the creator of all things.  It may be a mystery to how this is done, but it is the truth nonetheless.   Every star, every planet, every moon and the sun also has its designated position in the sky from which it may never vary without disobeying the will of God.  Every star above us has hung in its place since the moment of its creation and sings praise to God who made it. 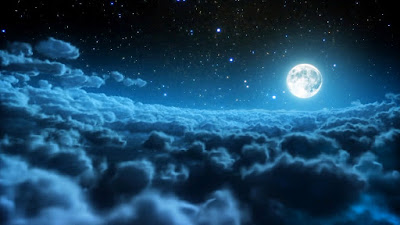 Knowing this, I look up at the stars and admire their devotion to remain fixed in the sky until ordered to move elsewhere.  John 14:15, “If you love me, you will keep my commandments.”  Verse 21, “Anyone who has received my commandments and observes them is the one who loves me.  And whoever loves me will be loved by my Father and I will love him and reveal myself to him.”

Those who do not, even the stars will suffer punishment.  Jude verse 11-13,
“Woe to them!  They have followed in the footsteps of Cain; they have abandoned themselves to the error of Balaam for the sake of gain; and they have perished in the rebellion of Korah.  They are blemishes at your love feasts, eating with you without fear.  They are shepherds who feed only themselves.  They are like clouds blown about by winds without giving rain, or like trees in autumn barren and uprooted and so twice dead.  They are like wild sea waves whose foam reflects their shameless deeds, or like wandering stars for whom the gloom of darkness is stored up forever.
Posted by Chriss Rainey at 7:30 AM